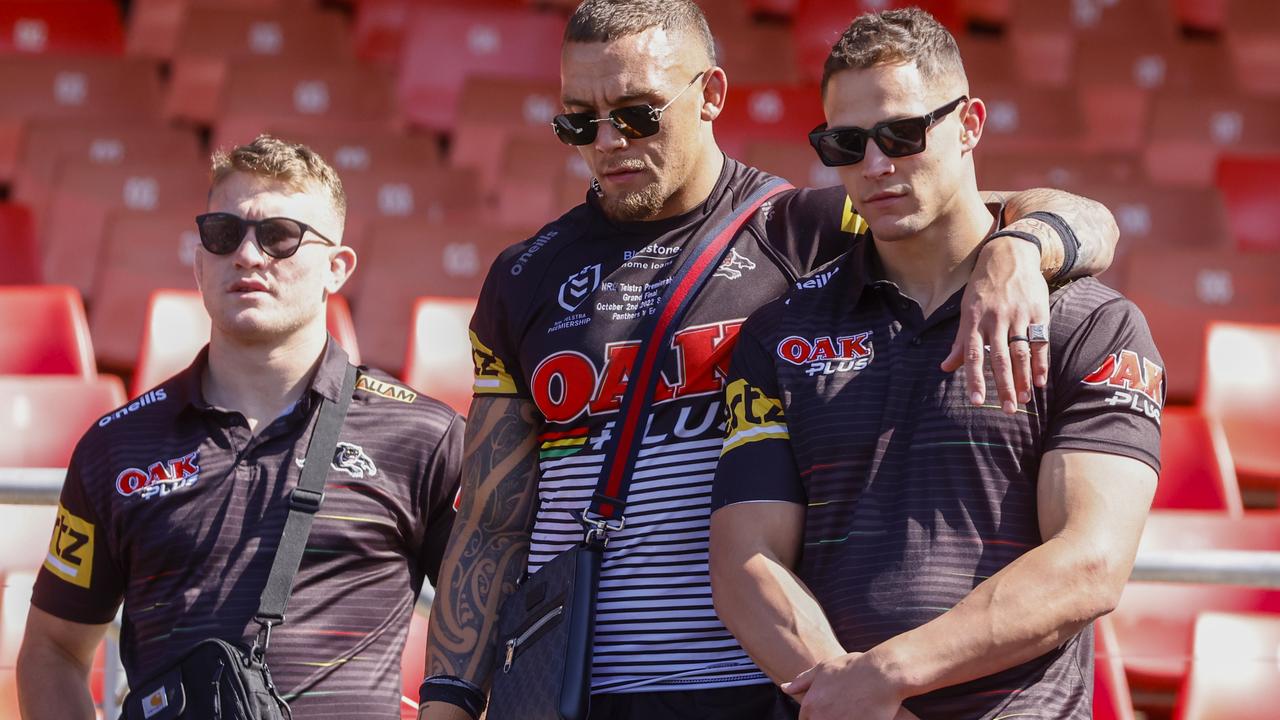 The Panthers have been blasted as winners lacking “class and humility” amid a string of controversies during their premiership celebrations.

Penrith became just the second team in the NRL era to win consecutive titles on Sunday night but their partying has gone “too far”.

Jarome Luai is facing a World Cup ban over a social media post, Api Koroisau mocked the club he’s about to join, and James Fisher-Harris showed no respect for past Penrith sides.

Luai posted a now-deleted Instagram story of himself alongside teammate Jaeman Salmon in the dressing rooms on Sunday night with a caption that has racial connotations.

Koroisau is about to join the Wests Tigers on a three-year deal and joked about them being any chance of replicating Penrith’s success on stage at a fan day on Monday.

At those same celebrations at BlueBet Stadium, Fisher-Harris declared the current his side “the greatest Penrith team ever”, eclipsing club’s 1991 and 2003 premiership sides.

Fisher-Harris then told the crowd of 3000 fans that “Parra are our sons. Right here, right now, that’s just a fact”.

The crowd responded with repeated chants of, “We hate Parra”. A video posted on social media showed several Panthers players joining in on the chant.

NRL premiership winner Braith Anasta said he could understand the players letting their hair down but admitted their behaviour was “tasteless”.

“I love the fact that they’re having a good time and they’ve had a big night and having a drink, I’ve been there, it’s the best, you’re on top of the world,” Anasta on NRL 360.

Paul Kent went much harder on the players than his NRL 360 co-host and declared they “lacked class” and are acting like teenagers.

HOOPS: Take nothing away from Penrith… but Eels’ Grand Final flop can’t be ignored

“Koroisau the mickey out of the Tigers who he’s about to join next year, where is the support and acceptance and acknowledgment of the previous Penrith teams.

“Fancy James Fisher-Harris coming out and saying we’re the best Penrith team ever. That’s the height of arrogance.

“Once the dust has settled and the result is in, weapons are down, show some humility and grace towards your opponents.”

Kent believes only skipper Isaah Yeo and fullback Dylan Edwards conduct themselves with any grace.

“Someone at Penrith, whether it’s Ivan Cleary or Brian Fletcher the CEO, they have to call these guys in and say ‘guys show a bit of class, just a little bit, show some grace and humility’… because not one shred has been shown so far.

“Isaah Yeo and Dylan Edwards are the only ones you’d look at and can say can walk away with some kind of integrity from what they say.

Why Did the Oath Keepers Do It?