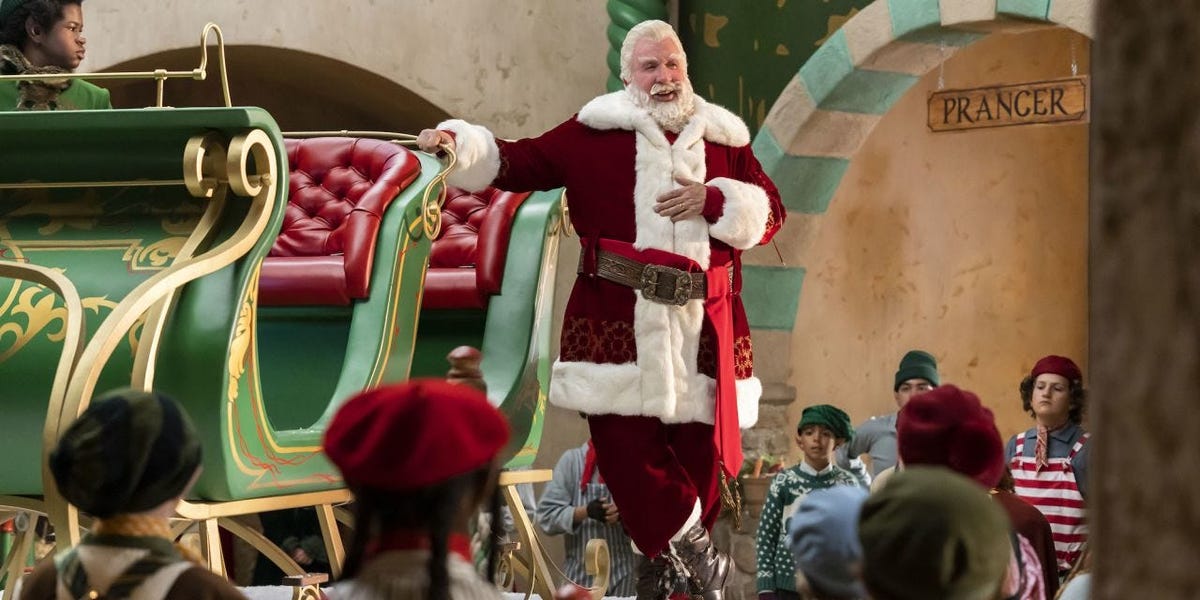 When you buy through our links, Insider may earn an affiliate commission. Learn more.

Just in time for the holiday season, “The Santa Clauses” is now streaming on Disney Plus. New episodes premiere every Wednesday through December 14. To watch, you'll need to subscribe to the service for $8 a month or $80 a year.

Following all of the festivities in the first three “Santa Clause” films, this new miniseries details what's next for the Calvin family. With Scott Calvin getting older and falling behind on his holiday duties as Santa, he sets out to find a worthy replacement that will satisfy his family, the elves in the workshop, and every hopeful child waiting for a gift on Christmas.

Check out the trailer for ‘The Santa Clauses'

How to watch ‘The Santa Clauses'

You can watch “The Santa Clauses” exclusively on Disney Plus. The miniseries premiered on November 16 and the finale airs on December 14.

A Disney Plus subscription is currently priced at $8 a month or $80 a month. New and existing members should keep in mind that the service will be raising its ad-free price on December 8. At that time, a new ad-supported Disney Plus plan will cost $8 a month, while the existing ad-free plan will increase to $11 a month.

If you're interested in adding more streaming entertainment to your membership, you can get extra content and save some money by signing up for the Disney Bundle. The bundle includes Disney Plus, Hulu, and ESPN+ for a starting price of $14 a month — which is a $12 savings every month. For more tips on how to get the best value out of Disney Plus, check out our guide to Disney Plus savings.

Disney Plus can be viewed on most smart TVs, smartphones, tablets, gaming consoles, or streaming players. You can also access the service on most web browsers on PCs, Macs, and laptops.

How many episodes are in ‘The Santa Clauses'?

“The Santa Clauses” is a miniseries with six episodes in total. The first two premiered on November 16, and a new episode will hit Disney Plus every following Wednesday. The finale will debut on December 14.

Is ‘The Santa Clauses' worth watching?

As of November 16, “The Santa Clauses” holds a 50% score on Rotten Tomatoes, based on eight reviews from critics.

Despite the lackluster ratings so far, “The Santa Clauses” is likely still worth catching if you're a Disney Plus subscriber looking for some holiday nostalgia. The cast of the original film returns to conclude the story of Scott Calvin as Santa Claus, so the new show could appeal to families and fans of the beloved Christmas classic.

Where can I watch ‘The Santa Clause' movies?

“The Santa Clause” film universe is composed of three movies, all of which are also available to stream on Disney Plus. If you've already subscribed to catch the miniseries, you won't need to pay any additional fees to watch the three feature films. Here's a full breakdown of the movie franchise:

As a Tech Deals and Streaming Reporter for Insider's Reviews team, Sarah covers the latest movie and series releases along with the best sales on products we recommend. Prior to joining Insider Inc., she was a Deals Writer at Wirecutter, a New York Times company.
After graduating from California State University, Fullerton with a degree in Marketing, Sarah started out as a Freelance Deals Writer at Wirecutter; there she focused on newsletter creation, social media promotion, and syndication in addition to deals writing before stepping into a full-time role. Her accomplishments from this position, in addition to the countless deals she's written, include implementing multiple social media marketing campaigns and launching a Deals Facebook group for the company.
Say hi (or send a picture of your pet) to Sarah at [email protected], or reach her on Twitter at @sarahhahr or on Instagram at @lord_ponty.
Learn more about how our team of experts tests and reviews products at Insider here.
Learn more about how we research deals.


Thank you for reading this post, kindly check out these amazing online resources

Seven Books That Will Make You Smarter