World Cup referee Stephanie Frappart: ‘You’re there because you deserve it’ 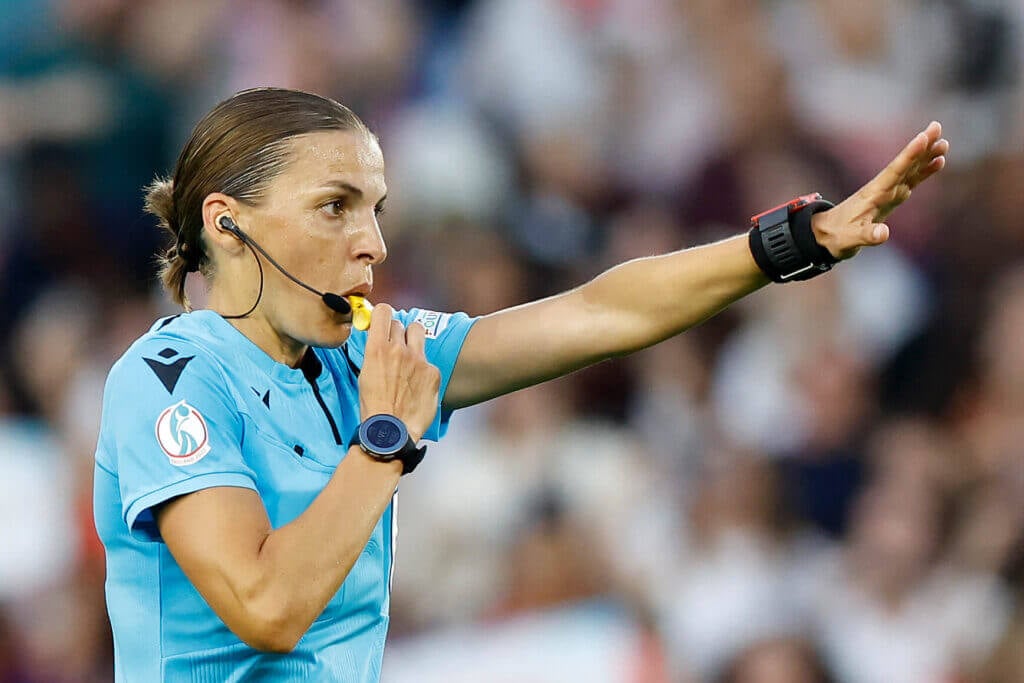 “I didn’t have any role models,” says World Cup referee Stephanie Frappart. “I think everybody is unique, so you can’t base your personality on someone else. You have to grow yourself. I am not a man, I can’t follow one of them.”

“The men’s World Cup is the most important competition in the world, not only football,” she says. “But I was the first female referee in France, the first in Europe, every time the first. I know how to deal with that.”

A few weeks before the start of the tournament, Frappart sat down with The Athletic to discuss being the first, handling herself on the pitch, and her feelings about Qatar’s human rights.

Her journey has taken 25 years, but it could have easily ended at the age of 18. She started refereeing five years before that, small-sided games for children near where she grew up in Herblay-sur-Seine, north-west of Paris.

Passion for the game came from her father, an amateur player for the local team, who Frappart watched each weekend. That prompted her to enrol on a course to learn the laws of the game. Then she started refereeing.

“I’d been playing football on Saturdays and refereeing on Sundays since I was 13,” she explains. “By the time I entered university, studying sport, it was just too much sport.”

She had to decide between playing or continuing with a promising refereeing career, having already officiated in the national Under-19 league.

“At the time, women’s football was not particularly developed, so I decided to stop playing,” she says. “But I had no plans to be the first female referee at the World Cup, or anything like that.” 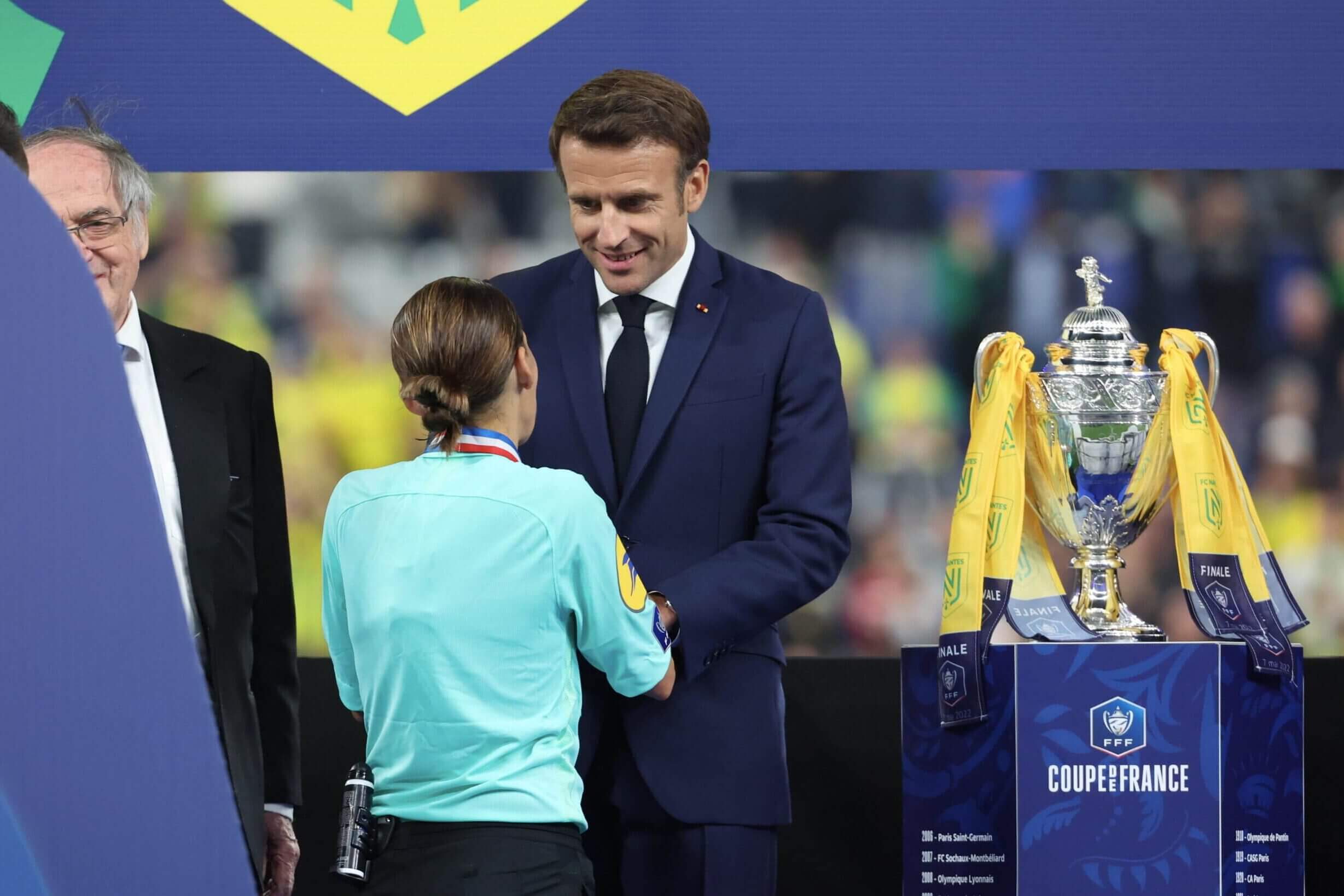 In the intervening two decades, Frappart moved rapidly through the French league system, becoming the first female referee to take charge in the third tier in 2011, before ascending to Ligue 2 in 2014.

In 2019, former US Orleans midfielder Pierre Bouby said: “She is the best referee in Ligue 2. Her voice is quiet but she has charisma and personality. She uses the right words. She explains.

“She’s diplomatic and you can talk to her. She doesn’t try to make herself the centre of attention. She is all about what’s best for the game.”

She was promoted to Ligue 1 three years ago, becoming the first woman to referee a top-flight fixture by taking charge of Amiens vs Strasbourg, a first still not ticked off in the Premier League or La Liga.

Her early appearances attracted dozens of column inches in France. UEFA observers also kept a close eye on her and were clearly impressed by her debut season in Ligue 1.

Frappart was chosen to referee the 2019 UEFA Super Cup between Liverpool and Chelsea men’s teams in Istanbul, leading an all-female refereeing team as Liverpool triumphed on penalties after a 2-2 draw.

The firsts continued. In December 2020, she took charge for a group match in the men’s Champions League; in March 2021, a men’s World Cup qualifier between the Netherlands and Latvia; in May 2022, the Coupe de France final, where Nantes beat Nice to win their first trophy since 1997. She also refereed the 2019 Women’s World Cup final.

“The men’s and women’s games are exactly the same,” she says. “Women’s football is getting faster and faster. It’s only the tactical approach that is different. But that’s just like how there’s different styles of play between Europe, Africa and South America.

“When you’re refereeing national teams, the only difference is that the level is higher, because they’re the best players in the country.”

How to share the pitch with global stars is one of the challenges any referee faces, not just in terms of positioning, but also communicating.

“You can’t speak all the time to the players, you need to find balance,” she says. “I like to speak to players, but most of the time they are excited, and at that point you can’t speak to them — they’re too much part of the game.

“Sometimes you smile, sometimes you explain some decisions. Also, you need to develop body language, which players can understand better than words. Everything can be done with body language — it means a lot to the players.

“When they’re calm, when they want to discuss, not when you’ve just made a decision, but as part of a game, when you pass close to them — then I like to discuss the decision with them. Remember, most of the time, they are under pressure too.”

The 2019 UEFA Super Cup was one of the most high-profile games of her career, filled with significant decisions. In the first half, she disallowed a goal by Christian Pulisic for offside, which would have put Chelsea 2-0 up. 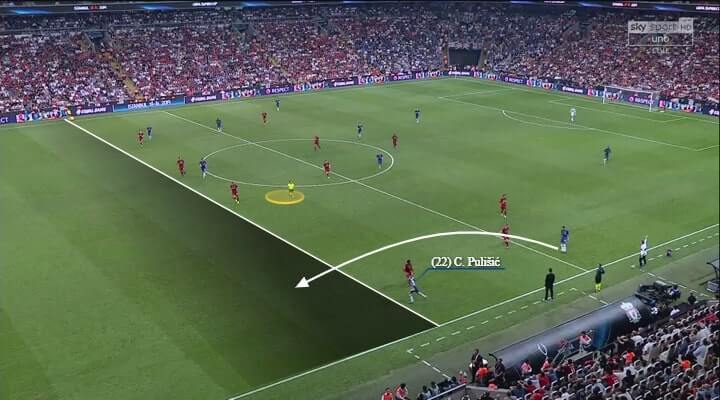 Though debated by Pulisic, her positioning was excellent, with VAR confirming the decision of her assistant. 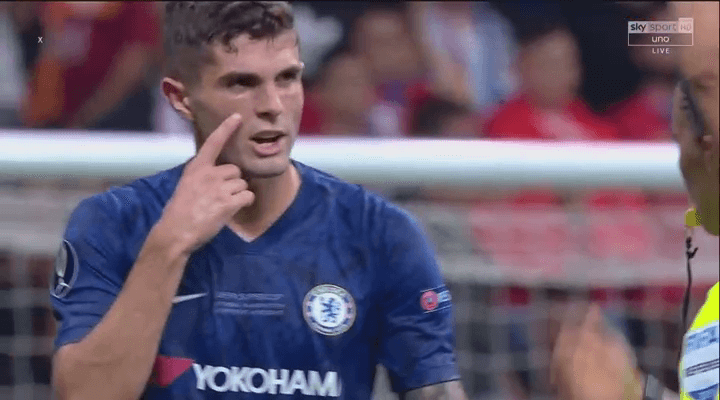 In extra time, with Chelsea trailing 2-1, came a more contentious decision. With the ball trickling towards the byline, Liverpool goalkeeper Adrian rushed to collect it. However, Chelsea striker Tammy Abraham had arrived milliseconds earlier and went down from the contact. 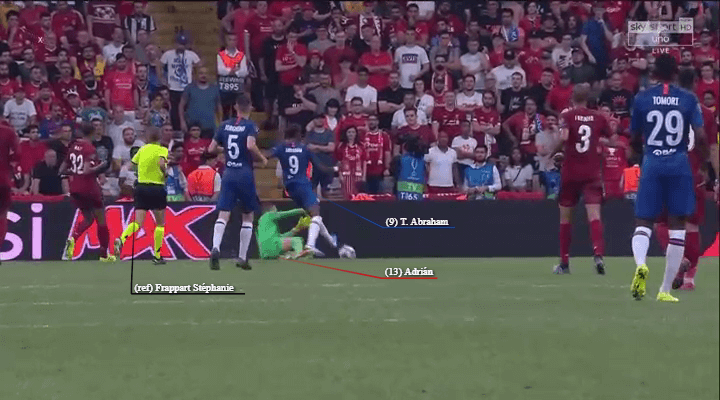 Frappart, whose positioning shows a clear sightline, gave the penalty. She refused to speak to the players immediately, instead speaking to her fellow officials through the earpiece to confirm the decision was correct.

Then, when the penalty was confirmed and the players had calmed down, she explained the reasoning to Jordan Henderson and Virgil van Dijk. 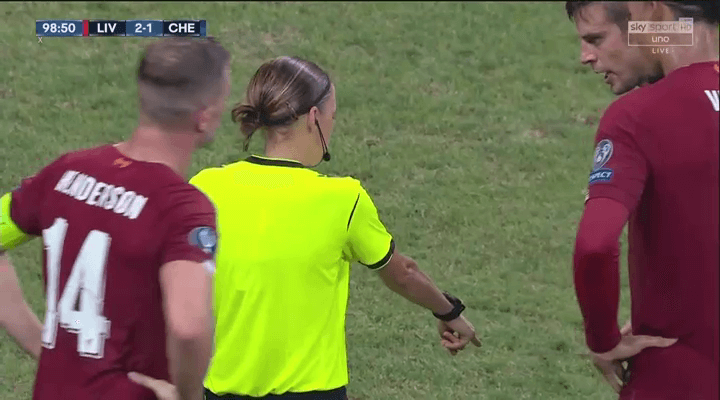 The World Cup in Qatar will feature VAR, like Russia four years ago, but will also be officiated with the help of automated offsides, for the first time at a major international tournament. Though some have suggested that these undermine the referee’s authority and make matches more complex, Frappart relishes the technology.

“Every game I referee now has it,” she explains. “It’s good, because it’s a parachute. We continue to make decisions, but if I’m wrong, I go outside (the pitch), observe the situation on the monitor, but it’s still me who decides if I’m happy with the decision.”

The chosen referees have been holding regular seminars since September to prepare for the increased scrutiny of a World Cup. “It goes to the screens of many people around the world,” says Frappart. “It could destroy your career.”

There is also competition, with the pool of officials trimmed as the tournament progresses based on performances, before the top-ranked referee takes charge of the final — as long as there is no nationality clash.

“I’ve not set a target, just as I never did at the Women’s World Cup,” she says. “I just try and do my best on the first day and the last day. You can’t put too much pressure on yourself.”

Frappart is looking forward to living with the other referees, who will stay together, and she plans to spend time with her fellow female referees during the preparations.

“They’re experienced, like me, they know what it’s like to be the first,” she says. “They were the first female referees in Asia and Africa.”

Being a female referee comes with extra concerns, including misogyny. Frappart has experienced sexism throughout her career, typically on social media, which she avoids, but it has also happened on the pitch.

“You have to stay level and continue,” she reflects. However, she admits that her family have been concerned about the abuse she receives.

“For sure, they are a little bit afraid. They don’t say anything, because they don’t want to get me into trouble, or make me concentrate on the game less.”

She adds of her physicality: “I’m not so tall, so strong, so I have to deal with differences. This grows your personality, develops that style.” 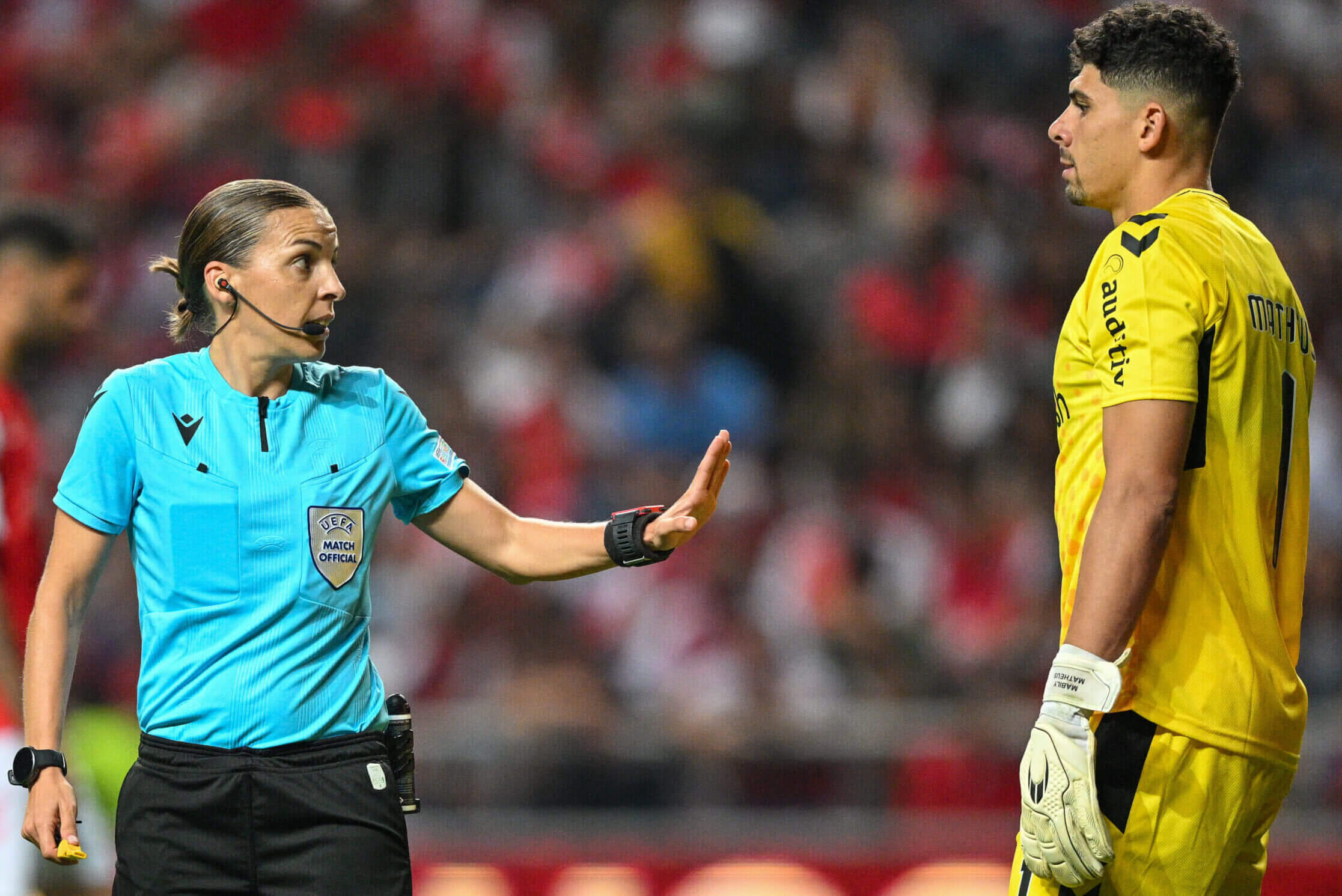 Frappart hopes her family will come to Qatar to support her, though the practicalities are difficult — referees will only find out which match they are allocated two days before kick-off. There are also other considerations.

Qatar’s record on women’s rights has been highlighted during the build-up to the World Cup, with women needing permission from a male guardian for many aspects of their life. The Athletic has also reported on the risks women could face when reporting sexual violence at the tournament.

How does Frappart situate being a trailblazer for female sport in a country where many women are denied basic rights? She takes time to consider her response.

“I’ve been to Qatar many times for seminars, and for the preparation of the World Cup. I’ve always been welcome in Qatar, so I have no problem to go there, to referee there.

There is just one thing left to ask, which The Athletic has wondered ever since Frappart said it three years ago, before the Super Cup final, when she stated that she was “never afraid” before a football match.

The World Cup is one step up. Frappart could find herself refereeing the biggest game in world sport, officiating in front of billions. Is she really never afraid?

She smiles: “When you’re refereeing, you’re happy. You know the importance of the game, but you know your own quality and skill. If they appoint you at this level, it’s because you have the quality for that.

“You’re there because you deserve it.”