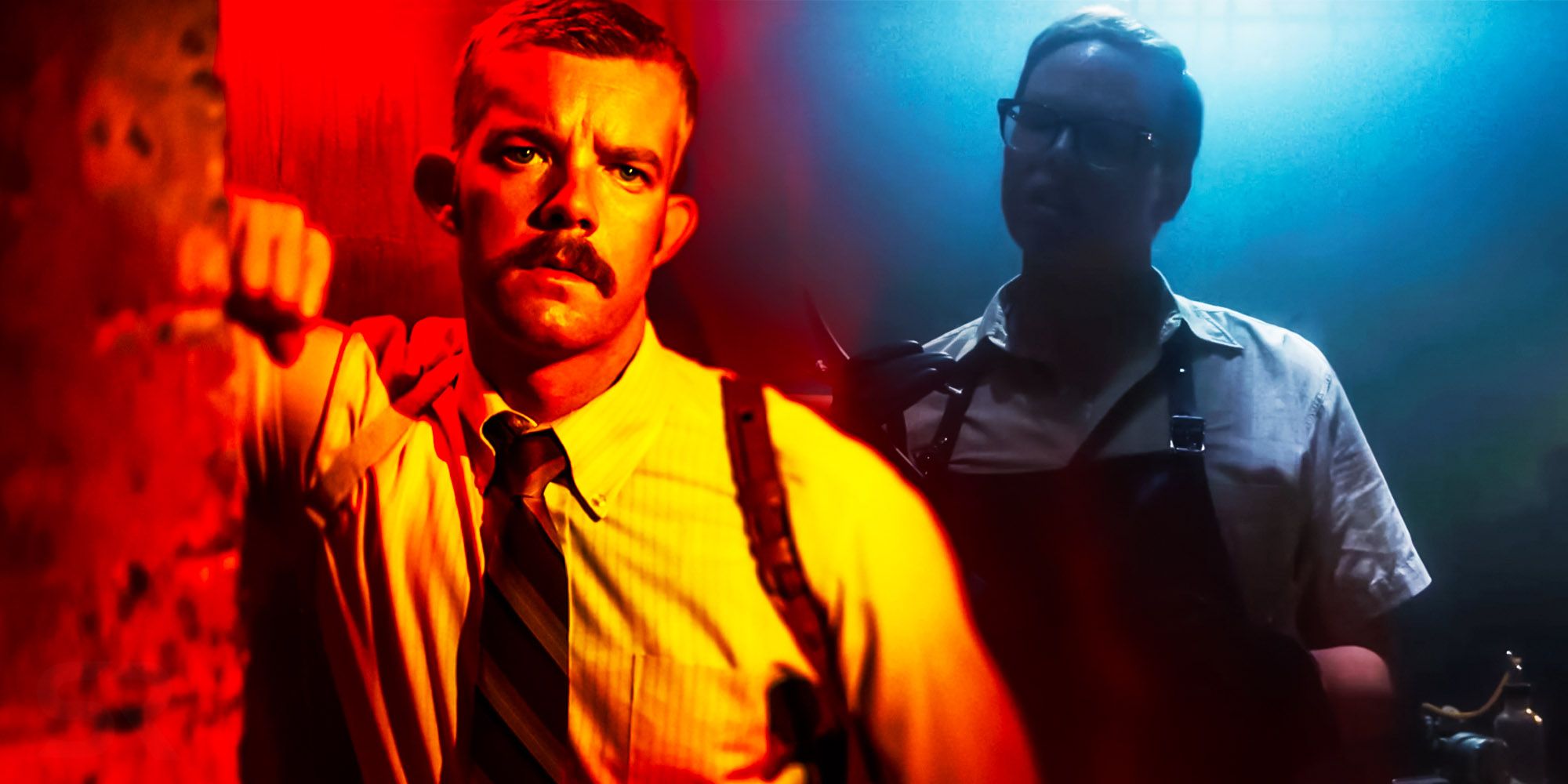 All but one of American Horror Story season 11’s main characters die in the two-part finale, with Big Daddy taking far more victims than Mr. Whitely did. Each character has an emotional confrontation with either death that incites a change of heart or action, but AHS: NYC’s abrupt ending still leaves much of the story left untold. However, since American Horror Story season 11’s killer is based on a real-life epidemic, the ambiguous future for Adam can still generally be surmised through what really happened to activists in New York City’s gay community at this time. AHS: NYC’s ending is certainly sadder than many past season finales, leaving more to ponder regarding the meaning of the series’ horror premise.

What Happens In AHS: NYC's Ending

American Horror Story season 11’s ending sees Sam, Hannah, and Patrick succumb to the real-life HIV/AIDS virus, with Gino and Adam spending the final episode searching for answers and engaging in important activism. When Sam dies, he’s taken through a dream-like hospital in which he sees men who he slept with slowly die from the HIV/AIDS virus. Patrick’s death also happens slowly as he’s taken back in time through painful moments in his life, with the ghost of his ex-wife Barbara showing him what the effects of his frequent self-denial and rebuilding of his life did to himself and others. As Patrick slowly dies, AHS: NYC’s character Gino sits by his bedside year by year.

Meanwhile, Adam tries to research the HIV/AIDS virus based on the information that the pregnant Dr. Hannah Wells left before her death, with her knowledge helping Adam spread awareness that the virus can be transmitted sexually. Meanwhile, Gino sees an increasing number of his colleagues, acquaintances, and patrons of similar areas dying from the disease, with the character trying to keep the wrath of Big Daddy at bay. After a decade of protests and watching those around him die, Gino is killed by Big Daddy in 1991. As Adam prepares to give a speech at Gino’s funeral, American Horror Story’s season 11 finale cuts to black.

American Horror Story: NYC’s emotional ending truly begins at Theo's tragic funeral, which immediately leads into an extended dream sequence in which Sam sees himself and others heartbreakingly die of the HIV/AIDS virus. Sam is brought before men he neglected, abused, or worse, while Big Daddy, who seems to be Sam’s shame and shadow, kills or tortures them. Sam’s death dream is meant to show that he needed to see the pain and suffering he caused others in an attempt to mask his own, with his money and power meaning nothing when he’s sick, alone, and dying of a disease.

It isn’t until Sam unmasks his shame by ripping off Big Daddy’s hood and kissing him that he’s able to move on and accept himself, as he lets go of his own pain and keeps himself from continuing to inflict it on others. Zachary Quinto's AHS season 11 character tried to outrun the darkness and ended up damaging the lives of those around him, and it wasn’t until the death of Theo and his own worsening condition that Sam recognized the harm he did to his own community. AHS: NYC’s character Henry then spreads Sam’s ashes in the ocean, allowing him to wash away his sins in the afterlife.

Were Ticks Responsible For Causing The AIDS Epidemic? What Really Happened

After much speculation over the cause of the AIDS epidemic, American Horror Story season 11’s ending doesn’t give a clear answer as to what incited the disease’s spread. Billie Lourd’s AHS: NYC character Hannah reveals that the illness didn’t originate with Fire Island’s deer, but that deer ticks from a lab could potentially be the answer. Fran had told Hannah of a conspiracy theory that the U.S. government experimented on deer ticks in labs and released them into the wild, which was intended to create and spread the disease. However, Hannah doesn’t hold much stock in Fran’s conspiracy theory, as the medical community’s interest in ticks primarily relates to the origins and spread of Lyme disease.

The reason why American Horror Story: NYC’s ending doesn’t give a definitive answer to the onset of the AIDS epidemic is that there wasn’t one when the Ryan Murphy TV show’s timeline ended. The origin of HIV is traced back to a virus mutated from chimpanzees, which was identified by researchers in 1999. Researchers believe the virus spread to humans as far back as the 1800s after consuming infected monkeys in Africa, which then spread to Haiti in the 1960s, then from the Caribbean to New York in the 1970s (via HISTORY). AHS: NYC’s focus on Fire Island’s deer and ticks was thus somewhat of a red herring, as the identification of Lyme disease and HIV/AIDS occurred around the same time.

American Horror Story: NYC episode 8’s ending suggested that Big Daddy was never a serial killer in the typical sense of the word, and that the leather-clad figure was never entirely real. Rather, Big Daddy was a visual representation of the virus, which stalked and killed various American Horror Story season 11 characters. When Big Daddy followed characters around, he was symbolizing their infection with the HIV/AIDS virus, even if they didn’t know it yet. When Big Daddy killed the characters, it was actually a physical representation of the disease killing them.

The two-part finale of American Horror Story season 11 helps confirm that Big Daddy was simply a physical manifestation of the disease. Having been diagnosed with HIV/AIDS for years, Gino continued to be visited by the Big Daddy, with his sightings becoming more frequent as Gino’s symptoms worsened. American Horror Story: NYC’s ending also included Gino seeing Big Daddy take a machine gun and mass murder his colleagues at his newspaper, revealing how quickly the disease had taken so many people. This explains why it was impossible for AHS: NYC’s dying characters to kill Big Daddy on Fire Island, as the disease would still come back for them later on.

Adam and Gino are given two very emotional and upsetting endings in American Horror Story season 11. Gino lives for another decade as he watches everyone around him die from HIV/AIDS virus and tries to keep away from Big Daddy’s wrath himself, with his activism efforts feeling in vain as his community still continues to perish. As Gino tried to push death away, he was still consumed by it while hopelessly watching those around him die. After Gino’s work helped bring awareness to the disease, the tired character was brought into the light by Patrick, but he still fought back against being Big Daddy’s next victim in the American Horror Story: Double Feature follow-up.

Adam’s AHS: NYC ending is similarly sad, as he continues his own activism work while seeing every single person he loves die from this disease. Adam continues Hannah’s noble work researching the disease and spreading awareness alongside Gino, but is left as one of the few who survives the illness. As Adam prepares to give a speech at Gino’s funeral, American Horror Story season 11’s finale implies that Adam has already given this same speech dozens of times before, and will have to do it again. Gino and Adam’s endings reveal that this serial killer wasn’t purposeful in who it stole away, but the survivors could still bring hope by combating this threat to their community.

Why AHS: NYC's Killer Is So Different From Past Seasons

While AHS: NYC does revive serial killers as main villains, the symbolic nature of the killer is different from past seasons. AHS: NYC’s killer is a very real, heartbreaking threat that taps into a different fear than vengeful spirits, sadistic psychopaths, supernatural entities, or religious symbols. American Horror Story season 11’s killer is a disease rather than a villainous man, woman, or ghost, which is a much more familiar and tangible fear for average Americans. Perhaps inspired by the fears and fatalities caused by the COVID-19 pandemic, AHS: NYC’s focus on the AIDS epidemic highlights the real horror story of the threat that terrorized New York City’s gay community in the 1980s.

AHS: NYC’s killer disease is thus more emotional than past villains, as it’s a murderer that many have direct experience with in their daily lives. Horror stories don’t always involve the supernatural or the monstrous minds of serial killers, with American Horror Story season 11's true story shining a spotlight on these horrifying fears. Over 40 million people have died globally from HIV since the AIDS epidemic began (via WHO), which makes it far more terrifying than American Horror Story season 10’s unrealistic vampires or aliens.

Next: What Is The “Sentinel”? Whitely's Plan In AHS: NYC Explained