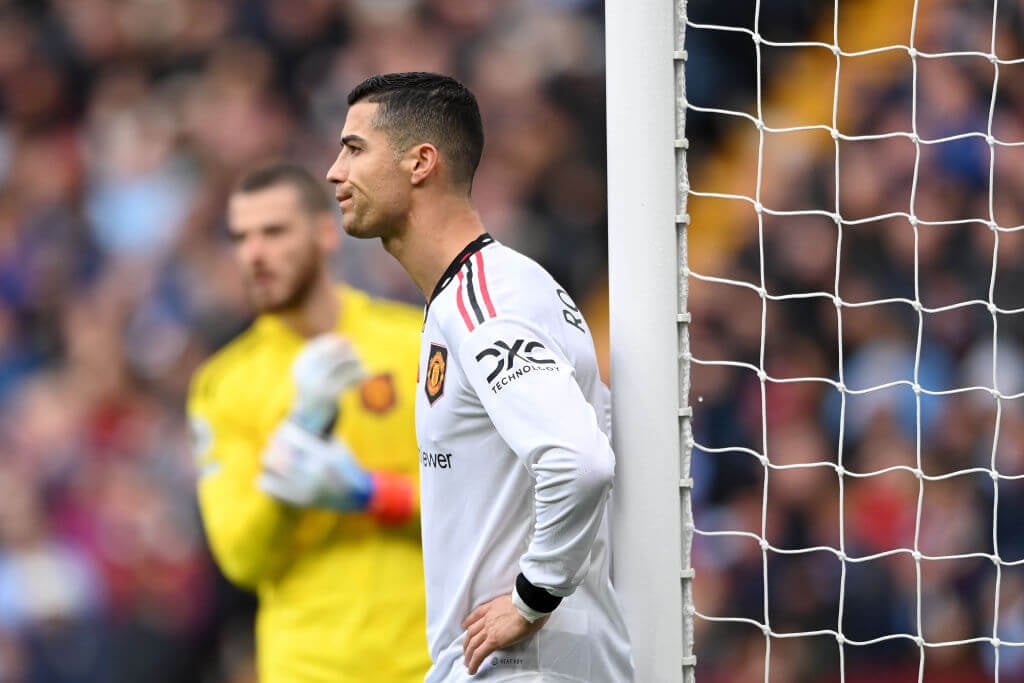 TalkTV gave it the full transfer deadline day treatment. A countdown clock, placed in the bottom right-hand corner of the screen, told viewers just how long was left before they were able to hear from Cristiano Ronaldo in full.

Jeremy Kyle was the last to tee it up after concluding his own, less-heralded interview with the comedian Dom Joly. One final push for interest came as the minutes ticked down, not that it was needed. “Part one of that bombshell interview is coming up next,” said Kyle.

The wait had already spanned three days. A 72-hour trail that began on Sunday night had teased a global audience with the best bits of Ronaldo’s interview with Piers Morgan and, so damning was the content, ensures the veteran forward’s days as a Manchester United player will soon be over.

“This is the interview the entire world has been talking about,” said Morgan.

Or part one, at least. This was the first half, a 45-minute discussion focused upon Ronaldo’s grievances and grief of the last 18 months. It was the interview he had been promising since attempts to leave Old Trafford in the summer came to nothing. An opportune time, he claims, to set the record straight on the eve of a World Cup.

Morgan was the chosen vehicle for vengeance, gently presenting the stage for Ronaldo to take aim. And, like with most of his career, the captain of Portugal did not miss.

As the juiciest snippets had promised in the days that had preceded the interview going live, there were shots fired at the Manchester United hierarchy, his former coach Ralf Rangnick and the one-time team-mates that have dared to suggest his powers are on the wane.

Erik ten Hag, United’s current head coach, can expect his moment of evisceration when the second part of an interview filmed in Ronaldo’s home last week is aired on Thursday night. The Glazers, too, are a target.

This rare window into the mind of Ronaldo was not all angst and frustration, though. Time was spent detailing the tragic death of his newborn son, Angel, in April and the strength of his relationship with girlfriend, Georgina Rodriguez.

Ronaldo still has more to say about his current plight with United, with stinging accusations of betrayal and disrespect to come in depth, but here are five pertinent points from the first half of that interview with Morgan.

“Everything was the same. They stopped on a clock, in my opinion, which is something that surprised me.”

These damning words had made headlines for days and their potency was not watered down by any wider context. Ronaldo claimed that time has stood still for United since the retirement of Sir Alex Ferguson in 2013, with off-field stagnation indicative of a broader malaise.

A move to Manchester City had been “close”, he said, but the emotional pull of United, the club that launched his career as a teenager, had outweighed the misgivings he has now chosen to make known.

“A club with this dimension should be the top of the tree in my opinion and they are not, unfortunately,” he said. “They are not in that level. I don’t know what’s going on but since Sir Alex Ferguson left I saw no evolution in the club, the progress was zero.”

United rail against that suggestion. The club’s training ground is currently being redeveloped with significant investment, while a rebuild of the club’s science and data teams is also under way. To Ronaldo, though, it has evidently not been enough.

Ralf Rangnick and the last Coca-Cola

“Deep inside me, I never saw him as the boss because I saw some points that I never agreed (with).”

If there was a point when Ronaldo’s return to United began to turn sour, it can easily be traced to the appointment of Rangnick. Last November, in the weeks that followed the sacking of Ole Gunnar Solskjaer, a figure that retains Ronaldo’s respect, it was decided that United should appoint Lokomotiv Moscow’s sporting director as a short-term fix. Ronaldo, it seems, was never sold on Rangnick, who by February had relegated his high-profile forward to the bench.

“To be honest, Piers, it’s something that I don’t understand,” said Ronaldo, who also claimed to have never heard of Rangnick before his appointment. “It’s the new coaches that are coming around, they think they find the last Coca-Cola in the desert, which is I don’t understand the football that invents many, many years.

“I’m in a club to win, and with my experience, I want to help. Like always, and some coaches that don’t accept and, you know, it’s part of the job.”

No love was lost between Ronaldo and Rangnick. A change of manager in the summer, however, has failed to alter the direction of travel that sees Ronaldo eager to exit Old Trafford.

“All leagues in the world, the youngest now, they are not the same as my generation.”

In those happy weeks that followed Ronaldo’s return in August 2021, common consensus decreed he would become the perfect role model for United’s young attackers to thrive alongside.

Wrong. Twelve or so months later and Ronaldo has voiced his apparent disappointment in the attitude of United’s youngsters. No one was criticised by name but asked to pick players in the world he admired, praise went only to Diogo Dalot, Lisandro Martínez and Casemiro when narrowing the question down to his current team-mates.

In a broader discussion on young players following his lead, he added: “They don’t care. Some ones, yes. But most of them, no. They are not going to have longevity in their careers, in my opinion. It’s impossible.”

“Their hunger (is different). I think they have things more easily, everything’s easy, they don’t suffer — and they don’t care.”

A penny for the thoughts of Marcus Rashford and Jadon Sancho.

“I still believe that the jealousy is part of that… It’s hard when you are a little bit down to listen to this criticism.”

Once they were Manchester United team-mates of Ronaldo but the friendships with Wayne Rooney and Gary Neville appear to be over. The swipes aimed in their direction had already been widely-documented and even allowing for Morgan’s baiting, it was clear the criticisms aimed at Ronaldo have stung.

Ronaldo said it had only been six months since Rooney had visited his house but those invites are unlikely to come again. “I really don’t understand people like that,” he said. “Or if they want to be in a cover of the paper of the news, or they want new jobs or whatever.”

Neville has laughed off the narrative but Ronaldo appears in little mood to rebuild bridges with team-mates that helped him win a first Champions League title in 2008.

Curiously, Ronaldo did reserve praise for Ruud van Nistelrooy alongside Roy Keane and Rio Ferdinand, despite a strained relationship with the former Holland international.

Angel ‘up in heaven’

“His ashes is with me, like my Daddy, they are here in the house… It is something that I want to hold for the rest of my life.”

Ronaldo’s motivation for an interview with Morgan was to settle scores but there was still time given to detail one of the most difficult periods of his life. His partner had been expecting twins in April but their son, Angel, did not survive during birth. Ronaldo says he received condolences from across the football world, as well as a letter from the Royal family. “I never, ever expect that,” he said. “Never.”

Ronaldo also admitted that his son’s ashes are kept alongside those of his father, Jose, who died in 2005.

“I have a small church,” he explained. “Yes, chapel. And I keep my daddy and my son (there). I talk with them every time and they are by my side. You know they helped me to be a better man, to be a better person, to be a better father. I am really proud of the message they send me, especially my son.”

Expect Ronaldo to address the health scare suffered by infant daughter Bella — and United’s treatment of his absence during pre-season — when the second part of the interview is aired. There is distance left to run in this one.