Pokémon Scarlet and Violet review: a step back for the open-world era 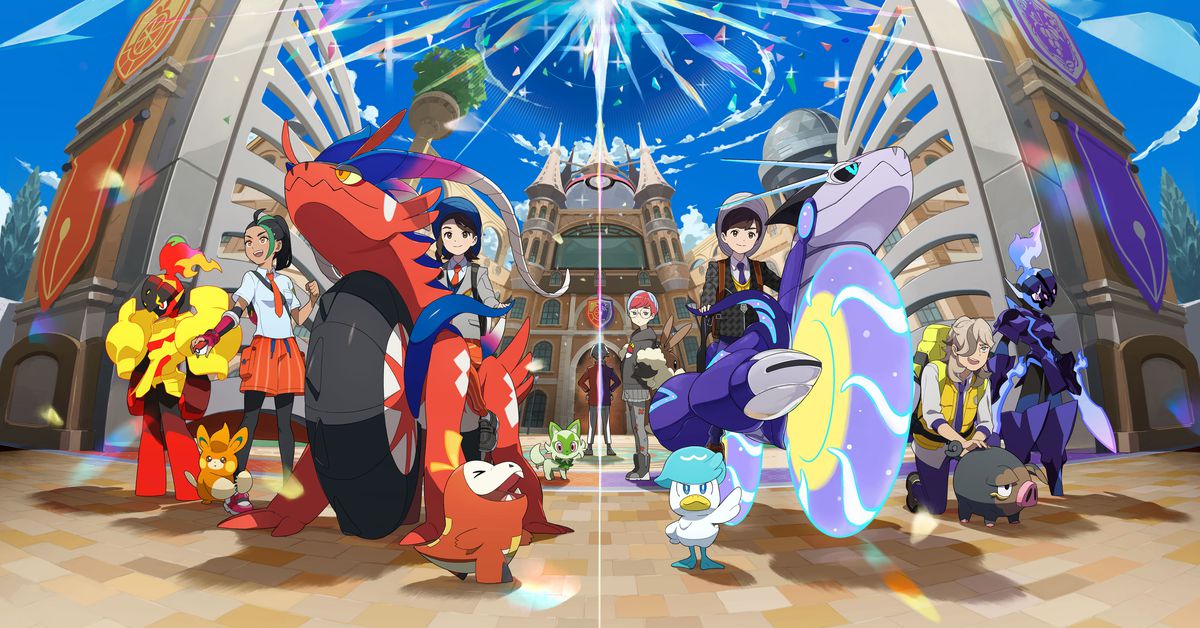 For all of Pokémon Scarlet and Violet’s stumbles in their attempts to usher the series into a new chapter, the most glaring among them is that a more convincing, ultimately superior blueprint was already laid for the series’ future 10 months ago with the release of Pokémon Legends: Arceus.

Arceus was dead set on making the world of Pokémon as compelling to explore in a mechanical sense as the series has always felt thematically. To do so, it deployed fluid traversal and action-driven battle systems, and it shaped up into one of the most exciting experiences the series has yet to offer. Scarlet and Violeton the other hand, go out of their way to make the modern-day Paldea region feel more lived in, and filled to the brim with stuff to do. But the actual doing of those things never quite sings the way it did in Legends: Arceus.

Pokémon Scarlet and Violet take pains to create a greater sense of freedom than the Pokémon series’ more recent mainline games like Pokémon Sun and Moon, and Pokémon Sword and Shield. This time around, the world is your Cloyster, and it purports to give you free rein to follow map-wide quest lines at your leisure. However, as I ran, drove, and flew around Paldea, it became clear that much of this promise of freedom was a facade.

Scarlet and Violet’s central hub is an academy sitting smack dab in the middle of the map: Naranja Academy or Uva Academy, depending on whether you’re playing Scarlet or Violet, respectively. (I played Violet for this review.) Here, students come from across Paldea to study Pokémon, life skills, and all other sorts of academia under the tutelage of a colorful cast of teachers. The academy acts as the progenitor for many of Scarlet and Violet’s stories, both big and small.

Inside the school, I met teachers and faculty who were more than willing to share their wisdom and stories with me. The social simulation aspects aren’t as deep as the likes of RPGs like Persona, but I appreciated the sense of community at Uva Academy. I felt compelled to learn more about my teachers (like the academy’s eccentric director Clavell) and my classmates (like the gung-ho, supportive rival Nemona).

The relationships I formed with my teachers are all fine and well, but the bulk of the relationship-building in Scarlet and Violet occurs out in their open world, across three main routes. All Academy students are sent out into the region to find their “treasure”: One involves defeating eight gym leaders alongside Nemona; one tasks you with taking out bases run by Scarlet and Violet’s designated Evil Group, Team Star; the third sees you helping Arven, the son of the region’s professor, conquer massive Titan Pokémon who are popping up around Paldea. The three routes pave the way for Scarlet and Violet’s wonderful characters and world-building, but also betray their deeply flawed open-world design.

Initially, it is true that you can approach these three storylines in any order. But as I began traveling through Paldea to earn my eight gym badges, it became clear that not only do these challenges not scale for players who can arrive at any point in their journeys, they were also often gated by progress in other routes. For instance, a Team Star barricade blocking my path could only be torn down by defeating the boss at a nearby stronghold. In another case, I stumbled across trainers and wild Pokémon whose levels far outranked the team I’d been building. I spent large swaths of my playtime in Violet feeling disoriented, tackling these routes with what felt like a whimsical precision, only to be met with sudden difficulty spikes, or segments where my opponent’s Pokémon were a dozen levels below mine.

It’s the nature of open-world games to invite you into certain areas while deterring you from others. But Scarlet and Violet lack many of the methods previous Pokémon games used to signpost whether you were in a dangerous zone. The removal of random battles means you can walk right past a wild Pokémon without seeing its astronomical level. You can go through entire cutscenes only to be met with a battle you’re not cut out for waiting on the other side. Scarlet and Violet are rife with scenes in which director Clavell assures students that they can pursue their own goals, whenever they want to. After only a few hours in the field, though, these words ring hollow. There’s a disconnect between what Scarlet and Violet promise and what they actually allow.

These frustrations are compounded by the fact that Scarlet and Violet don’t integrate several of Legends: Arceus’ quality-of-life changes that made interacting with its open areas manageable, satisfying, and fluid.

Scarlet and Violet let you traverse Paldea on the backs of Koraidon and Miraidon, two Legendary dragon-type Pokémon who gain a suite of exploration abilities as you progress. But these mounts never achieve the same agility of the local Pokémon you met along the course of your journey in Legends: Arceus — they’re cumbersome and slow, even when flying over the landscape. I found myself using fast-travel points more often than riding on the Miraidon’s back.

In one of its biggest failings, Scarlet and Violet have also taken a step back from Arceus’ action-based Pokémon-capturing mechanics. They do borrow from Arceus’ stealth system, allowing you to crouch and sneak behind unsuspecting Pokémon before throwing one of your own monsters at it for a preemptive strike. But there’s no way of aiming a Pokéball directly at a target; there’s no way to capture Pokémon without having to enter a battle; and there’s certainly nothing to match Arceus’ evolution of the core catch-’em-all mechanics; Scarlet and Violet can’t come close to the sheer joy Arceus found in exploring, collecting, and documenting in an open-ended world.

On a more granular level, Scarlet and Violet introduce their own spins on the series’ battle mechanics, most notably in the new Terastal forms, which allow you to change or strengthen a Pokémon’s elemental type to experiment with new tactics. Even when playing against trainers in single-player, it was satisfying to watch new strategies unfold. In one case, a gym leader Terastallized a Sudowoodo (normally a rock-type Pokémon) into a grass-type opponent. I initially sent out my water-type Quaxly to take advantage of Sudowoodo’s weakness to the element, only for the Terastal form to put me on my back foot. Suddenly, I was vulnerable.

Most of the generational gimmicks Pokémon games offer tend to be a short-term power boost, often accompanied by an impressive transformation and a new bit of lore. But they’re fairly straightforward in how they change up gameplay. Compared to Sword and Shield’s Gigantamax feature or X and Y's Mega Evolutions, Terastallizing feels like it could have lasting strategic effects on Pokémon’s competitive scene. At its core, the mechanic is calculated and strategic, and opens so many possibilities for how an individual Pokémon can change throughout the course of a fight.

The promise of this battle feature notwithstanding, the greatest redeeming factor I can attribute to Scarlet and Violet is still its writing, which, like Legends: Arceusbuilds toward a truly stellar, compelling endgame. Despite my frustrations with its structure, mechanics, and the fact that it looks and runs like a middling GameCube game most of the time (there were several instances, even outside of the open-world areas, where character animations would drop to near stop-motion levels of movement), I still left Scarlet and Violet enamored by its character relationships and neatly tied-up themes of finding one’s own joy in the big, wild Pokémon world. I’ve found Game Freak’s most recent Pokémon stories among the best the series has ever told, and I’m hopeful whatever comes next will follow Scarlet and Violet’s narrative lead.

I do leave Scarlet & Violet with a lot of excitement for the future, but even still: It’s a strange phenomenon to watch a series enter a new generation while still grappling with its identity as a whole. Pokémon Legends: Arceusfor all of its strengths, was a piece of sand in the microchip of Pokémon’s near-annual machine. But it showed so much promise in its fluid exploration, intuitive capturing, and unified systems. To see Scarlet and Violet fall behind, 10 months later, is more than a little disappointing.

At its baseline, it’s a compelling enough Pokémon game, with stories among the series’ most memorable. However, as I reflect on Scarlet and VioletI do find myself thinking back on Pokémon Legends: Arceus more fondly. It had some loose screws of its own, but it tightened so many more, ones that still jostle in Scarlet and Violet. I’m hopeful that Arceus is the foundation for the next outing in the series, even if there are lessons to be learned in the open fields of Paldea, as well.

Pokémon Scarlet and Violet will be released on Nov. 18 on Nintendo Switch. The game was reviewed using a pre-release download code provided by Nintendo. Vox Media has affiliate partnerships. These do not influence editorial content, though Vox Media may earn commissions for products purchased via affiliate links. You can find additional information about Polygon’s ethics policy here.

A weekly roundup of the best things from Polygon