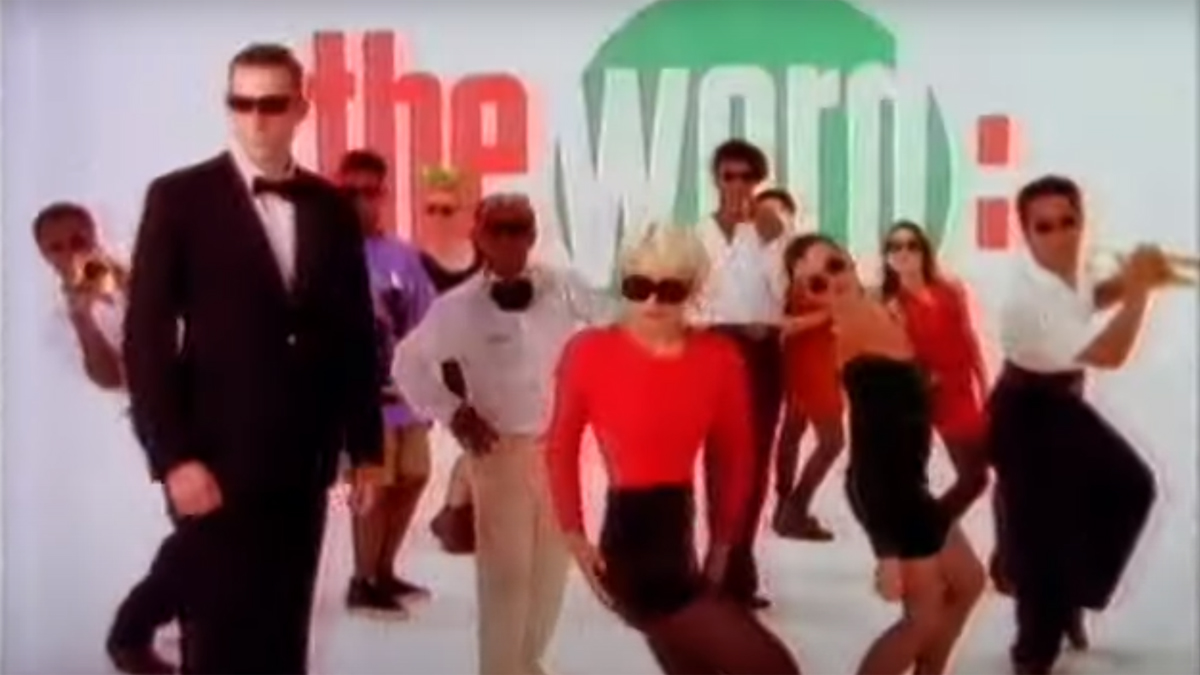 While The Word was lewd, lairy, and borderline legal in places, its headline-grabbing tawdriness was in part a reaction to, and a rebellion against, the buttoned-down, finger-wagging conservative values that had reigned in the UK for over a decade. The Word wasn’t just a rude ratings’ grabber, but a riotous middle-finger in the face of the establishment (nowhere was this better encapsulated than when Rage Against the Machine performed their iconic anthem ‘Killing in the Name’ in 1993, live and uncensored). Pushing the boundaries of the possible and the permissible, then, were The Word‘s political mission statement and raison d’etre. As reported in The Guardian, Liz Forgan, Michael Grade’s deputy at Channel 4, told Parsons and the team that ‘if she went to a dinner party, and The Word wasn’t being attacked by the chattering classes, it wasn’t doing its job.’ And what a job it did.

It would be impossible to detail all of The Word‘s many line-crossing moments, but a selection should provide enough of a flavour to imagine or recall the full effect: a man dressed as Santa was once pulled across the studio by his testicles; Nirvana’s Kurt Cobain loudly proclaimed that his partner, Courtney Love, was ‘the best fuck in the world’; incarcerated killer Dennis Nilsen reportedly tried to get songs he’d written in jail played on the show (this never reached air, but it speaks to The Word‘s anarchy and mass-appeal); and security had to be tightened after an anonymous call received during a recording claimed that an armed, drugged-up and disgruntled audience member was ready to shoot Terry Christian.

However, the segment that people remember most vividly – probably because the horror was indelibly scorched into their brains – was ‘The Hopefuls’, wherein ordinary members of the public scrambled for their fifteen minutes of fame – and never has the word ‘ordinary’ begged to be enclosed within inverted commas more than right now – by doing such viscerally unpleasant things as drinking pints of sick, eating blocks of lard, snogging a pensioner, raking for a party whistle inside animal guts, eating sandwiches filled with things like pubic hair, verrucas and toenails, and dipping a finger in a morbidly obese man’s sweaty belly-button cavity and greedily licking the residue. This latter feat of no-holds barred fame-hunting was witnessed by one of the evening’s special guests, actor Rob Morrow, who looked visibly disturbed and disgusted.

And, yet, while The Word‘s satirical take on the fame game was cruel and exploitative, it was also pure. Nowadays, people are savvy to the point of cynicism, and expect sustained fame from even the most insignificant of reality-TV appearances. Back then, for ‘The Hopefuls’, an appearance on TV was an end in and of itself. It was more innocent – if that can ever properly be said of people rubbing their faces through faeces and innards. Audiences, too, have become inured to that variety of shock. What felt edgy in the 1990s is now passe. There are new lines in the sand, and swearing, nudity and the grotesque are ignored.

In a recent interview with The Guardian, former presenter Katie Puckrik summed up the show’s legacy: “This was the pre-internet age, before all the portals of opportunity were locked down. The Word predicted reality TV, Jackass-style stunts, TikTok pranks. It was a crucible of 21st-century culture.”

It may well be that The Word’s spirit of anarchy hasn’t died, but transferred from network television to the largely unregulated Wild West of the internet, where anyone can do anything, and anyone can watch it, whenever and wherever they like.