Junior Paulo in discussions for fight with Siosiua Taukeiaho, Samoa vs Tonga, next Paul Gallen, Gallen vs Hodges 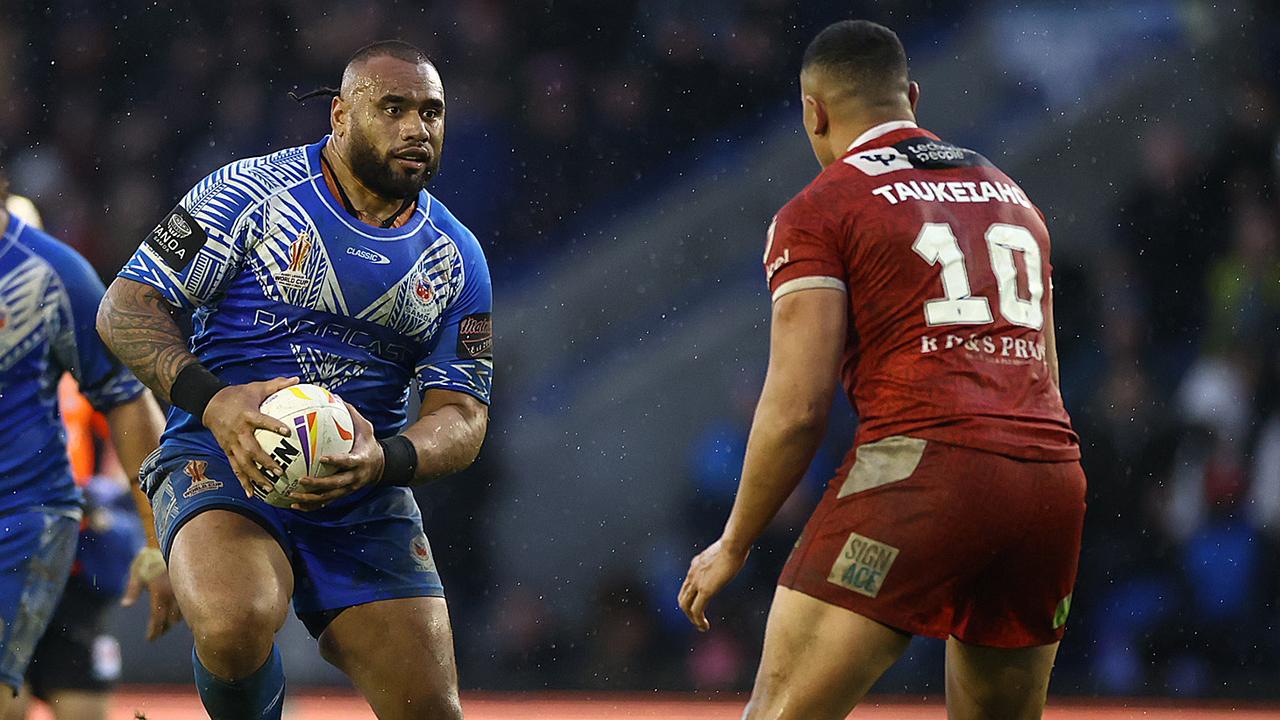 Samoan World Cup hero Junior Paulo has entered discussions to become the second footballer to face Siosiua Taukeiaho as the search heats up for Australian boxing’s next crossover star.

On the eve of Paul Gallen’s hyped farewell, Fox Sports Australia can reveal promoters No Limit Boxing have already been approached about pitting the Pacific Island powerhouses in a bid to determine who fills the void left by the retiring NSW Origin great.

Already a two-time Roosters premiership winner, Taukeiaho makes his professional boxing debut on the undercard of Gallen and Justin Hodges in Sydney this Wednesday evening.

Should the fighter dubbed ‘TKO’ win, there will then be an immediate push to have him square off next year against Paulo – who skippered Samoa all the way to a Cup final against the Kangaroos on Sunday morning (AEST).

The Parramatta prop is understood to have made significant improvements to his striking game since a gutsy decision loss to Gallen way back in 2016.

Only last year, Paulo also spent time training with Australia’s first UFC champion Robert Whittaker and would have been in the mix to be Gallen’s farewell fight were in not for his Cup commitments.

When quizzed on talk of what potential fights may be ahead however, Taukeiaho said he did not want to look beyond Lowe although revealed the idea of helping fill the void left by Gallen’s departure excited him.

The 110kg forward also admitted surprise at all the attention surrounding his debut, especially following the revelation that promoters were struggling to find anyone game enough to throw down with him.

“Once I saw all the headlines about that I actually jumped off social media,” Taukeiaho laughed at Monday’s open workouts in Darling Harbour.

“But suddenly I had all these people tagging me on Instagram saying ‘fight this guy, fight that guy’ … then when the fight was announced it blew up again.

“It was a bit surprising really.

“And right now, I can’t worry about that.

“My focus is Wednesday.

“But moving forward I’ll fight whoever.”

“HAVE I GONE ONE TOO MANY?”: Gal opens up on big fear ahead of farewell fight against Justin Hodges

So as for what he knows about Lowe?

“Not much at all,” Taukeiaho conceded of the Toowoomba native who played 142 NRL games, won a premiership with Storm and in retirement has had a handful of heavyweight fights.

“I didn’t even know he was a former NRL player.

“It was my trainers who told me he played for Souths and Melbourne.

“One of my mates also sent me a clip of his most recent fight. And he’s not too bad.

“I’m certainly not taking him lightly.

“I guess we’ll find out more on Wednesday.”

While Taukeiaho only arrived back to Australia three days ago, he said time spent training in the UK with former middleweight champ Martin Murray had him ready to go.

“I trained with Martin about five times,” he said.

“It was hard to fit in around footy – I drove up to his gym, caught the train – but learning off someone with his experience was great.

“It was great that he gave up his time to help me prepare.

“And I’ll be looking to do the same when I move to France.

“I’ll keep training over there and look to fight at the end of every Super League season.”