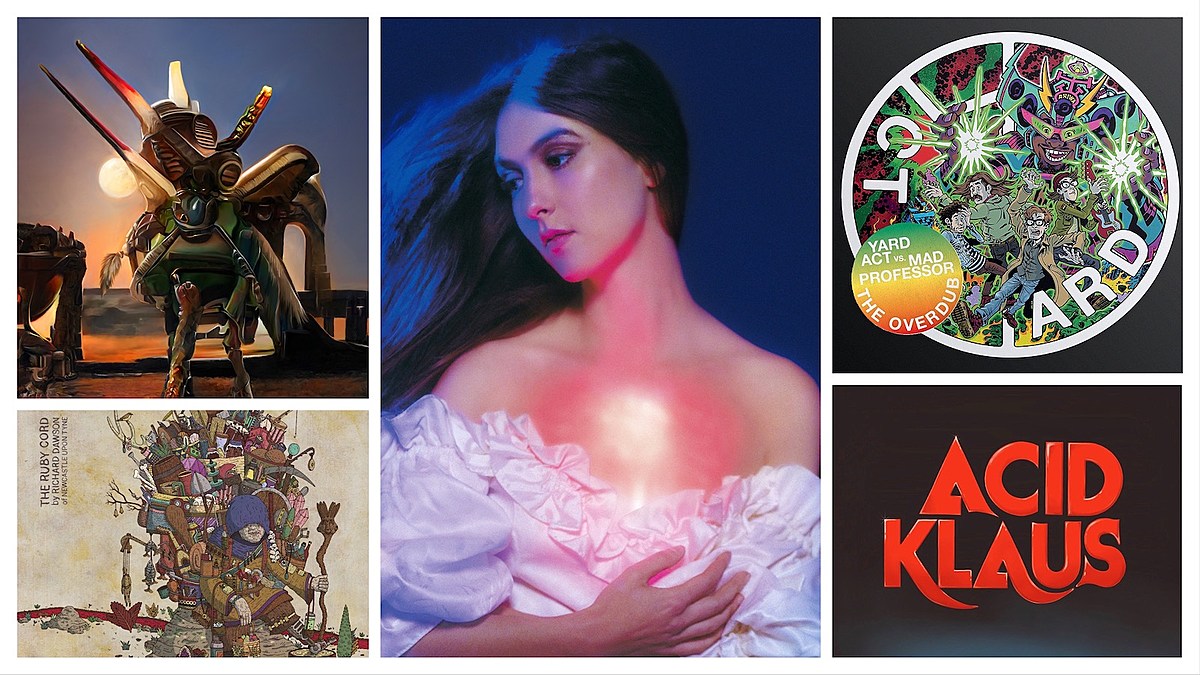 The year is winding down and Best of 2023 listmaking is not far away. But before that, reviews of new albums from Weyes Blood, Richard Dawson, Acid Klaus, Röyksoppand Yard Act‘s The Overload which has been given a dub remix by Mad Professor.

These were not the week's only five new albums, and over in Notable Releases, Andrew listens to Caitlin Rose, Foushee, Gladie, and more.

Other Indie Basement related stories from the week: The Church announced a new album; The Walkmen are back; and Cate Le Bon produced longtime collaborator H Hawkline's upcoming album. Plus: Pavement are getting their own jukebox musical.

ALBUM OF THE WEEK #1: Weyes Blood: And in the Darkness, Hearts Aglow (Sub Pop)
The follow-up to 2019's ‘Titanic Rising‘ is another magical mix of the personal, the universal, and the cosmic

Weyes Blood's Titanic Rising was BrooklynVegan's favorite album of 2019. How does her follow-up fare? Very well. I reviewed And in the Darkness, Hearts Aglow elsewhere on the site and here's part of that:

An especially empathetic songwriter, Mering is in sublime form this time, weaving the intensely personal with the universal, the macro and micro, and wrapping it in melodies, harmonies and arrangements that make it cosmic. Nowhere is this more evident, right in the title, than on opening track “It's Not Just Me, It's Everybody,” where Mering sings about our loss of real connection while we seemingly have everything at our fingertips: ” Fragile in the morning / Can’t hold on to much of anything with this hole in my hand / I can’t pretend that we always keep what we find / Yes everybody splits apart sometimes.”

ALBUM OF THE WEEK #2: Acid Klaus – Step on My Travelator: The Imagined Career Trajectory of Superstar DJ & Dance Pop Producer, Melvin Harris (ZEN F.C.)
High concept solo debut of Moonlandingz and International Teachers of Pop member is a fun tour of the last 50 years of electronic music, with some cool guests

Sheffield producer Adrian Flanagan has been involved in electronic music for over 20 years, with projects (some still active) including The Moonlandingz, International Teachers of Pop and the Eccentronic Research Council. (He was also briefly a member of The Fall.) For his solo debut, he's set the bar for himself very high with a concept album about, the title helpfully explains, the “Imagined Career Trajectory of Superstar DJ & Dance Pop Producer, Melvin Harris.” Says Flanagan, “In many ways, I am Melvin where unwavering creativity and ambition, mental illness, and a persuasive addictive personality merge heartedly with the R&R (Rave & Roll) dream.”

This concept framework is also an opportunity to time-jump through a variety of dance music styles, from the acid house that inspired his punny moniker, to techno, trance, house, chillout, europop and more. Helping him out are a variety of friends, including his Eccentronic Research Council bandmate Dean Honer, Sheffield legend Richard Hawley, Ghost of a Saber Tooth Tiger's Charlotte Kemp Muhl, and actress Maxine Peake. The album is out, meanwhile, via Yard Act's ZEN F.C. label. We follow Melvin from his early days (“Party Sized Away Day”), to his time in the spotlight courtesy a crossover hit (“Blow Your Speakers”) which led to excess (“Crashing Cars in Ibiza”), eventual downfall (“Bad Club Bad Drugs Bad People”), then cult status rebirth (“The Three Rooms of Nightclub Marilyn”), a pandemic curveball (“I Used to be a DJ in a Club [Now I’m Just a DJ in My Bedroom]),” and retirement (“Eulogy to a Quiet Life”).

Flanagan is a dextrous, clever producer whose love and deep knowledge of the last 50 years of electronic music keeps the banger quotient very high. The storyline is a bonus for those in the know, but you don't need to follow the plot to stay on the dance floor.

We talked to Adrian about some of the specific musical touchstones of the Acid Klaus album that is a very good read.

For nearly 20 years, UK singer-songwriter Richard Dawson has been honing a distinctly proggy brand of folk rock that feels equal parts Fairport Convention, Soft Machine and Van der Graaf Generator. His music is charmingly odd and a bit of an acquired taste, but one that definitely grows on you, and encompasses everything from the pastoral acoustics, mossy synthpop, and heavy skronk and drone. There's a little bit of all of that in The Ruby CordDawson's seventh solo album that's the final part of a trilogy that started with 2017's Peasant and continued on 2019 album 2020— a continuing story that went from the medieval era to the present and now a future that doesn't seem all that distant. “So many of us are moving into these fantasy worlds,” says Dawson. “Whether it's actual constructed virtual realities, computer worlds, or retreating into even more fantastical realms…. conspiracy theories, nationalism, amateur football punditry. People construct their own world because this one is so flawed.”

It's an ambitious album but despite being an 80-minute double and the third part of a heady triptych, it's not a bad place for the uninitiated to start. With one caveat. The album opens with an enormous hurdle, the 40 minute epic “The Hermit” that builds from ominous, atmospheric drone to near operatic melodrama and cacophony, plus a capella sections, gang chorus vocalizing, and more. “The Hermit” also contains moments of sheer beauty, but it's a lot. If you can make it past that, a distance longer than most Beatles albums, the rest of The Ruby Cord is enjoyable, folky prog that is no less ambitious but holds a little closer to traditional song structures. Dawnson's voice, which has a weathered, craggy quality to it that at times resembles kindred spirit Robert Wyatt, is a perfect match for this music. It would be rude to say “just skip the first track,” especially given the thought Dawson has put into these albums, but it's something, along with its complex narrative, that casual listeners may need to warm to.

“The Hermit” may also be best experienced via it's companion film by director James Hankins which has been screening around the UK and and is out soon to stream.

Long-running Norwegian electronic duo Röyksopp wrap up their Profound Mysteries project — that features commissioned visual art for every song — with this third and final volume. Like the first two, there are a lots of vocal collaborations, and III features Goldfrapp, Susanne Sundfør, Pixx and more. Svein Berge and Torbjørn Brundtland dabble in newer styles (like autotuned, minimal R&B) but mostly they stay in familiar territory, and there's nothing wrong with that. They're masters of sleek, stylish eurodance, the kind that gleams like the blue ice found near the North Pole, and a few of these tracks are great, including Goldfrapp collab “The Night” and the throbbing vocoder workout “Speed King.” But cherry picking the best of these three Profound Mysteries might have resulted in one great album instead of three fine ones.

Spoon are not the only indie band releasing a dub version of their new album this year. UK group Yard Act got Mad Professorwho collaborated with Massive Attack on their 1995 dub album No Protectionto rework their great debut album The Overload. Titled The Overdubit's credited to Yard Act vs Mad Professor and is out now exclusively through record store Rough Trade as one of their Best of 2022 exclusives. The cover art, by Rufus Dayglo, is also a tip of the hat to No Protection. While there are some cool sonic experiments, and a couple of the album's songs lend themselves to this dub reggae makeover (“Land of the Blind,” “100% Endurance”), most of it feels undercooked. Unlike Spoon's excellent Lucifer on the Moon (made with Adrian Sherwood), The Overdub is more of a curio than something that stands on its own.

And check out what's new in our shop.