Cards, dominoes and suspicion: In search of Qatar’s football culture 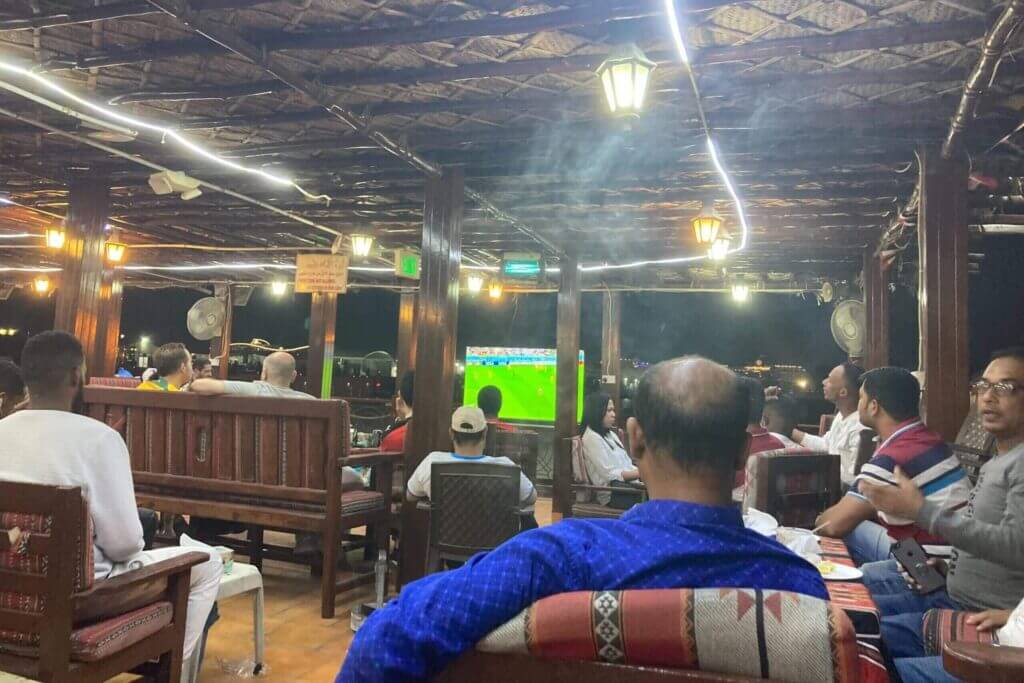 It is hard to stray far from the beaten track in Doha because generally speaking, that track has only just been built.

It also feels… what’s the word? Soulless? Even with around one million people reported to be descending on Qatar over the next month, it all feels terribly superficial. Even in the Souq Waqif, where the pungent smells of spices and incense burners fill the air, the World Cup feels less like the greatest show on earth than some kind of illusion.

We imagined the atmosphere would change once the football started. And perhaps it will. But walking along the Corniche at 10pm last night, witnessing a spectacular post-match firework display over West Bay, it is fair to say World Cup fever was struggling to take hold.

It didn’t help that Qatar were soundly beaten by Ecuador in the tournament’s opening game, and were left grateful that their opponents slowed down after rushing into a 2-0 lead that raised the prospect of humiliation for the hosts. But even if Qatar had pulled off a shock win, would the mood have been significantly different? 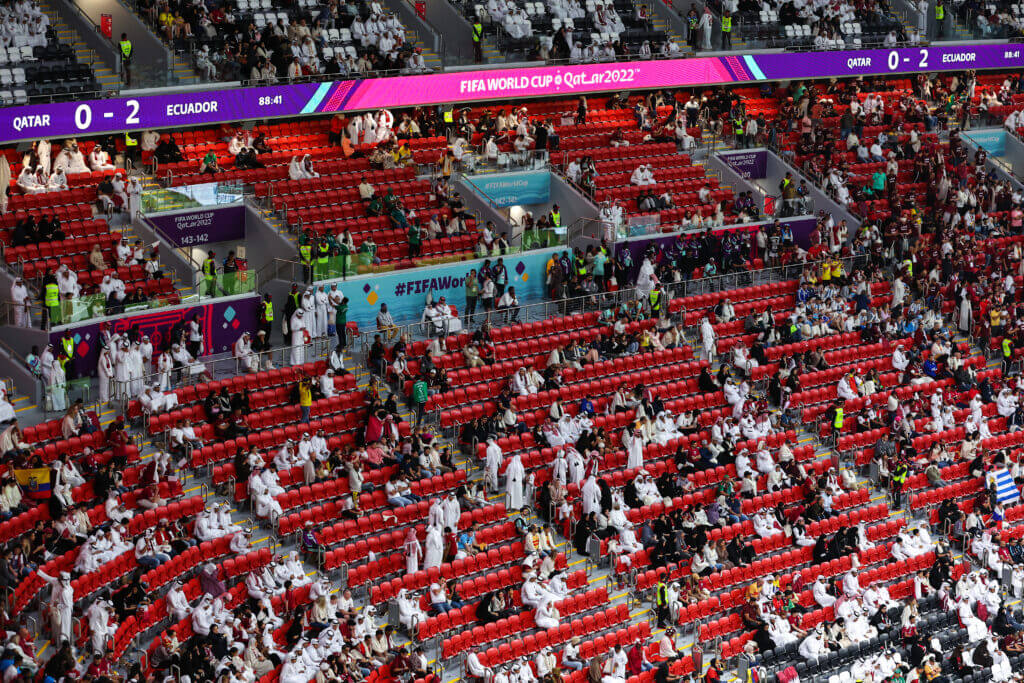 The Al Bayt Stadium had thousands of empty seats towards the end of the second half (Photo: Robbie Jay Barratt – AMA/Getty Images)

Qatar is not a football nation. Yes, the game is integral to the state’s vision of gaining friends and influence on the global stage — and it has been successful over the past decade and more, a tiny nation that has become such a major player in geopolitical and diplomatic terms. But you cannot build a football culture overnight.

The intention last night was to wander away from the tourist traps and the fan parks in Doha and watch the game among Qatari football fans, hoping to get a feel for what the host nation really makes of the World Cup — not just the prestige but also the visiting fans, many of them expecting or demanding a more Westernised experience.

The difficulty is that the locals we were looking for are few and far between. Of a population recently estimated at 2.94 million, only around 330,000 (11.2 per cent) are Qatari. The largest proportion is Indian (25 per cent) followed by Bangladeshi and Nepalese (both 12.1 per cent). There are also large groups of migrant workers from Egypt, the Philippines, Sri Lanka and Sudan.

Qatari society has several distinct strands. At the bottom, subjected to appalling working and living conditions, are the construction workers, mostly from Nepal. Those in the service industry, whom you encounter in hotels, shops and restaurants, are almost invariably men from India and Bangladesh. The Qataris appear to keep themselves to themselves. 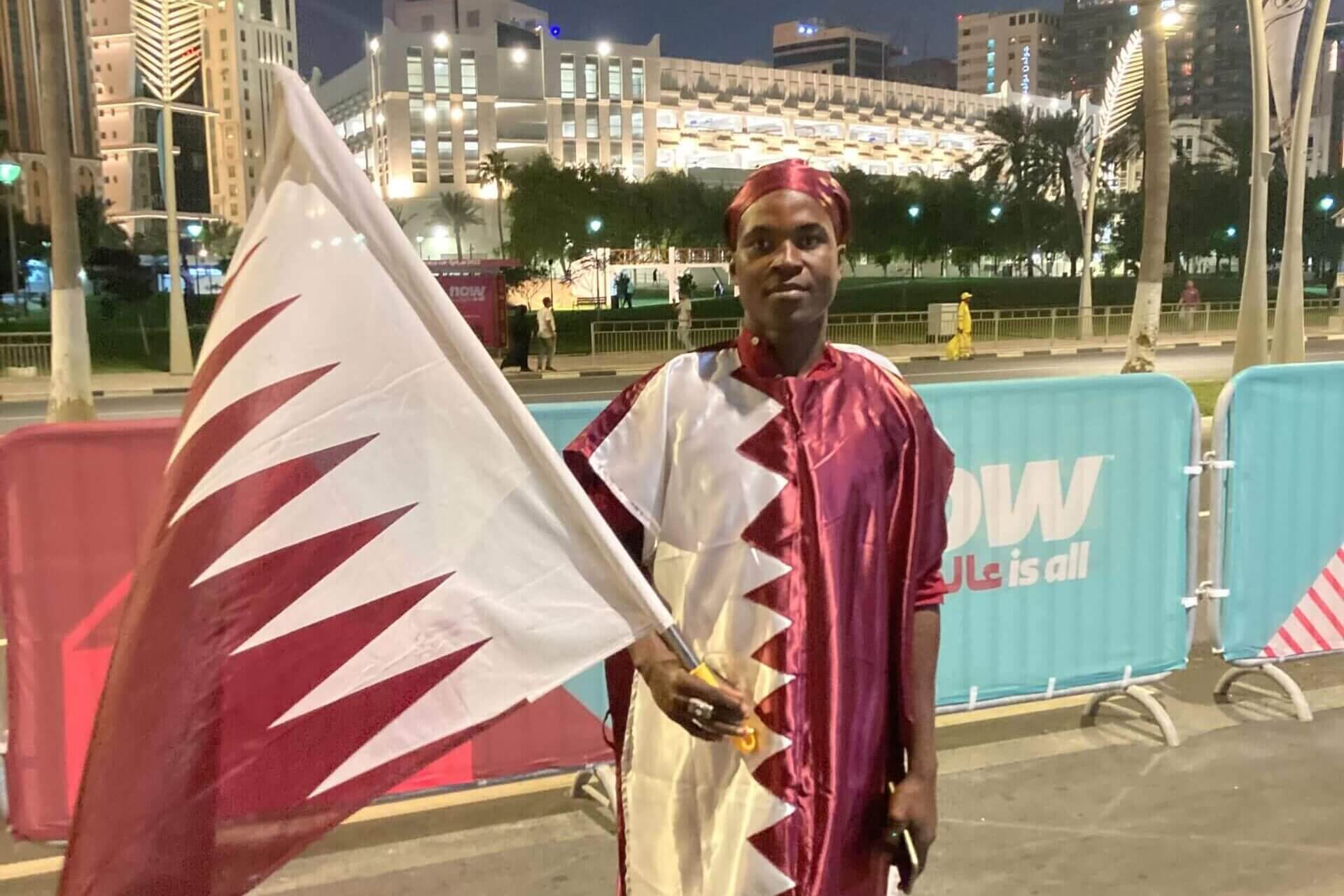 A fan of Qatar in Doha on the night of their opening match (Photo: Oliver Kay)

One local, not a Qatari, suggested the place to find them was at a fishermen’s cafe just beyond the Corniche. It’s one of the oldest establishments in Doha and it is where the fishermen traditionally go to relax, play cards or dominoes, perhaps smoke shisha after a day at sea. And they are showing the World Cup matches on a big screen. Perfect.

Wandering in two hours before kick-off, the cafe seems exactly as advertised. There are indeed men playing cards and dominoes at the tables, some of them getting quite worked up as they do so. In a city where everything appears shiny and new, everything about this cafe, not least the decor, seems to evoke the old Qatar, before its population tripled over the space of 16 years as the pace of change came overwhelming.

There is just one problem. The locals don’t want to talk to a visiting reporter. They are engrossed in their cards and their dominoes, but they won’t talk when their games are over either. They appear suspicious of Western journalists, which is perhaps not surprising.

But then a television crew starts filming them going about their business, apparently with their consent. Are these people famous? They do seem to exude an air of importance. Or perhaps that is simply what comes of such a stratified society.

Gradually the cafe fills up. But the new arrivals aren’t Qataris. They include Sajir, who arrived from Kerala, India, two years ago and runs a restaurant. He wants Argentina to win the World Cup, on account of his adoration of Lionel Messi. “But today, I will support Qatar,” he says. “Because we’re living here. I want Qatar to do well.”

Sajir expects the locals to keep themselves to themselves. This tallies with the suggestion of a British expat in Doha, who says the more conservative Qataris want little to do with the World Cup. Another suggests the locals will prefer to gather together to watch the match at a majlis, which literally means a sitting room, a place for a communal gathering of friends, usually men.

On this occasion of huge national significance, he suggests, everyone’s majlis will be at Al Bayt Stadium. And when you consider how small the Qatari population is — and that a capacity crowd of 67,372 is expected — maybe that doesn’t leave many more fans, casual or otherwise, to be back in Doha.

We come back to the question of just how much the World Cup will excite locals. Attendances in the Qatar Stars League rarely creep into five figures. When FIFA held the Club World Cup in Doha in 2019, Al-Sadd, the Qatari champions, attracted a crowd of 7,047 in the first round and 4,878 in the quarter-final. A football hotbed it is not.

When the opening ceremony started, those inside the cafe were briefly transfixed by the beIN Sports coverage. But not for long. It dragged, as opening ceremonies do. The dominoes and card games continued.

Only when the Emir of Qatar made his speech did a hush descend. But not entirely. There was still a group of men — not locals, it seemed — playing dominoes. The Qataris glared at them.

Finally, the match started. Almost as soon as it did, Ecuador’s Enner Valencia put the ball in the Qatari net. There were polite celebrations when a VAR let-off followed, but the reprieve was temporary. Valencia converted a penalty after 16 minutes and claimed a second goal with a towering header 15 minutes later. Qatar were facing humiliation.

Late in the first half, something strange happened in the cafe. One of the groups of Qatari men started pushing and shoving each other. They had to be separated and one of them was led away.

Maybe the football really was setting pulses racing. Or maybe it was a disagreement over their card game. It was tempting to assume the latter.

There was another brief commotion when Almoez Ali was picked out for a free header in first-half stoppage time. Some of the Qataris rose to their feet in celebration, but Ali missed the target and half-time came and went without note, though it was notable that there was a surge in people ordering shisha.

The second half was a drag. Nobody in the cafe seemed interested, least of all the Qataris. It did not feel like a huge national event. It barely felt like an event at all.

At the final whistle, the crowd dispersed. One of the Qataris, Mohammed Ali, was persuaded to share a few brief thoughts. “Today was not good,” he said. “It makes me angry.” 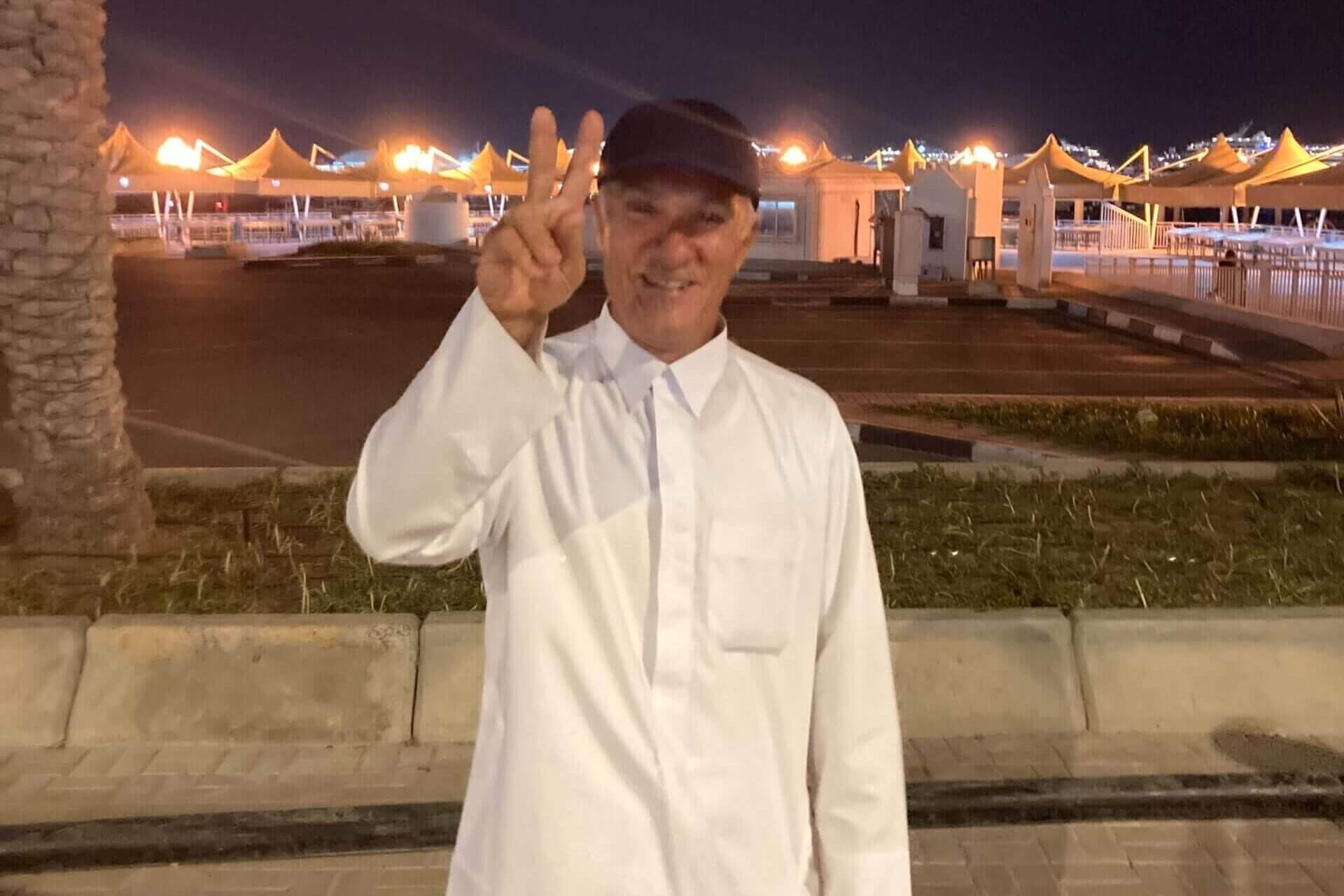 He said he preferred the Qatari team of 1988 that beat the United Arab Emirates and Japan at the Asian Cup before narrowly missing out on the semi-finals. With the current team, he said, “too many players are from outside, not from Qatar”.

Such are the lengths Qatar have gone to in an attempt to build a team worthy of the World Cup. And still, they looked out of place.

In truth, the whole tournament looks out of place here. Maybe that will change as it goes on and something resembling a World Cup vibe takes over but for now, it just feels weird.

Quite apart from all the many more serious objections raised to holding the tournament in Qatar, a basic ingredient for a World Cup host is a serious passion for football — or at the very least, as with the United States in 1994, the possibility to build one over time.

Anyone who was in South Korea or Japan in 2002, Germany in 2006, South Africa in 2010, Brazil in 2014 or Russia in 2018 will tell you one of the most special things about those tournaments was the excitement felt by the locals.

This is not, as FIFA president Gianni Infantino would have it, a case of “spitting” on the Arab world and suggesting it has no right to host a World Cup. Egypt, Morocco, Algeria and Tunisia are football-mad, as are Saudi Arabia, Iraq, Iran and others. Qatar? Not so much.

Indeed, FIFA’s own bid evaluation report back in 2009 made the same point. The Qatari bid claimed that hosting a World Cup “would inspire the entire population of the Middle East and introduce a new generation of fans to football”, but the evaluation report warned the state had “limited potential in terms of the number of football fans”.

That was certainly the impression gained on Sunday evening. The post-match firework display was certainly spectacular enough, but walking along the Corniche afterwards, it was difficult to resist the feeling that there is something missing.