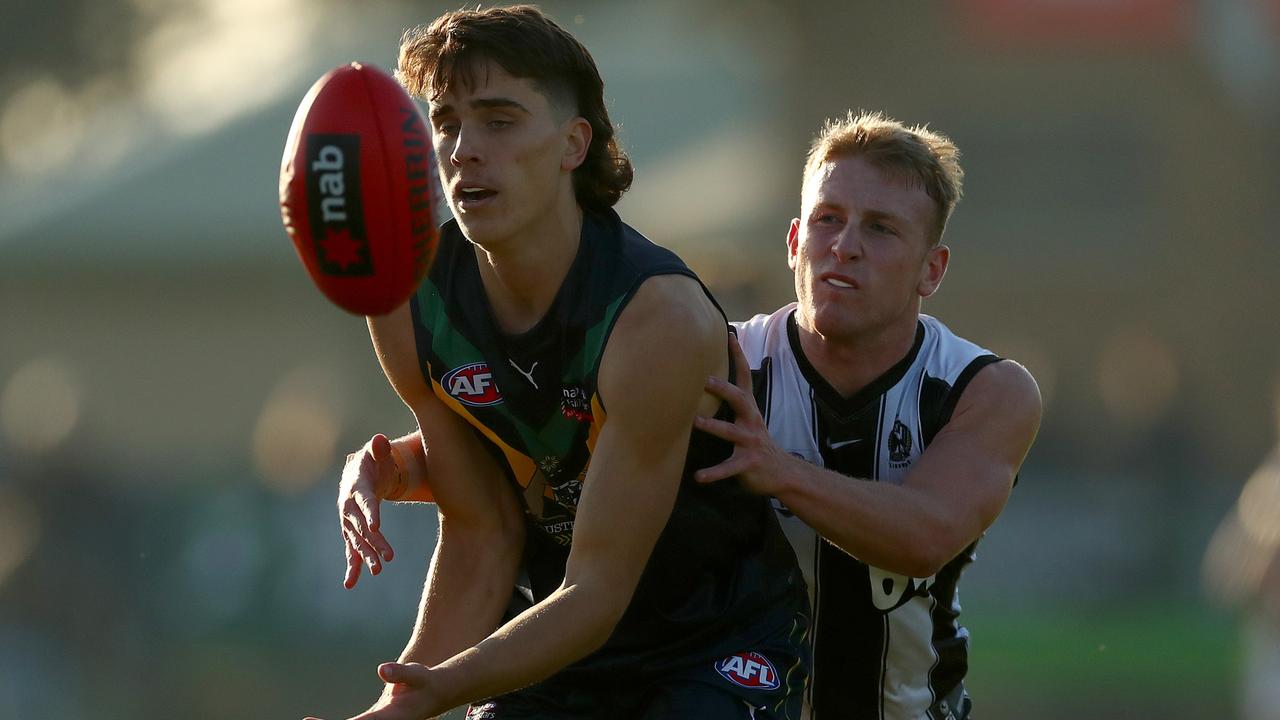 If you feel like you’ve had a rough build up to a job interview, spare a thought for Luke Teal.

Two days before he was preparing to take to the field for the crucial under-18 competition’s opening month – before school duties take over – Teal was rushed to hospital.

“I just felt a sharp pain in my stomach and couldn’t really walk or get to school,” he told foxfooty.com.au at a Connors Sports Management training session with a host of other top-end draft hopefuls, as well as a suite of recruiters watching on, not to mention new St Kilda coach Ross Lyon.

Watch the 2022 AFL Draft on Fox Footy and Kayo from 7pm EDT on Monday November 28. New to Kayo? Start your free trial today >

“I went to the doctor and then went straight to the hospital from there. It was a pretty quick 24 hours, straight into surgery and sort of missed the next three rounds of the NAB League, which was pretty upsetting, but it was something that had to get done.”

Making matters even more difficult for Teal were the repercussions of missing such an opportunity to strut his stuff in front of recruiters while so much of the draft pool was doing just that.

Teal had a lot to show off, too, with the 189cm prospect having impressive ability to lock down small and medium forwards while also providing plenty of rebound offence.

“It was certainly very tough (to miss the first three games),” he said.

“Especially the first sort of four games of NAB League were heavily emphasised to us to build off, so making a good first impression was always what I wanted to start with and then sort of not being able to do that was a bit difficult.

“I had to work through that. Luckily I got back for one game before for I went away for school, but it was all okay, hopefully it works out.”

Teal managed to play for the NAB AFL Academy side against the Pies in April, before bad luck would again strike the teenager.

This setback came just one week before he was due to feature for Vic Metro in the under-18 championships.

It involved a tackle in school football, which once again threw his season into uncertainty.

“The broken collarbone one week before the National Championships was just as bad, if not a lot worse than the appendix,” he recalled.

“I think knowing that the state game was just around the corner was very devastating. I knew I sort of had to spend eight-to-nine weeks on the sidelines.

“That was definitely something I had to work on by myself and with my family throughout that eight-week period, watching games and not being able to play as much as I wanted to.”

Teal said the support of his family was vital throughout the recovery period, as he grappled with the range of emotions that come with being unable to compete and bolster his chance of an AFL dream being realised.

“I think once I got back, I was able to sort of suppress it a bit,” he said.

“Just sitting there and watching sort of all your best mates and sort of almost other competitors because you’re competing against to get drafted succeed. It’s obviously amazing to watch but at the same time you just want to be out there yourself.

“It’s bittersweet. I think I worked through it pretty well and on the other side now, so just hoping the draft works out.”

Teal’s father, Robert, played 18 senior games for the Swans during his career before a back injury curtailed his time in the game.

Robert and the family helped Teal get through what was a difficult period emotionally, let alone physically.

“I definitely did lean on him a lot and my older brother sort of had a similar thing, he had two shoulder reconstructions and a hamstring surgery,” Teal said.

“My family was really good through that period. It wasn’t so much just seeking advice, it was more just having someone to sort of talk to and lean on in that time, which was really good.”

Teal’s performances late in the season boosted his draft capital significantly, with the defender showing shades of his idols, Will Day at Hawthorn and Bailey Dale at the Western Bulldogs.

His journey to this point, he hopes can be a source of inspiration for the next wave of draftees who may have their plans up-ended through no fault of their own.

“For the boys that I know sort of coming up the next two or three years I think given the year I’ve had I think I’d be able to help a lot of boys through struggles they might have, whether it’s injuries or just battling mentally,” he said.

“To be someone that could be a bit of a role model and someone that they can maybe get advice from would be good for me I think and I’d love to help anyone I can.”