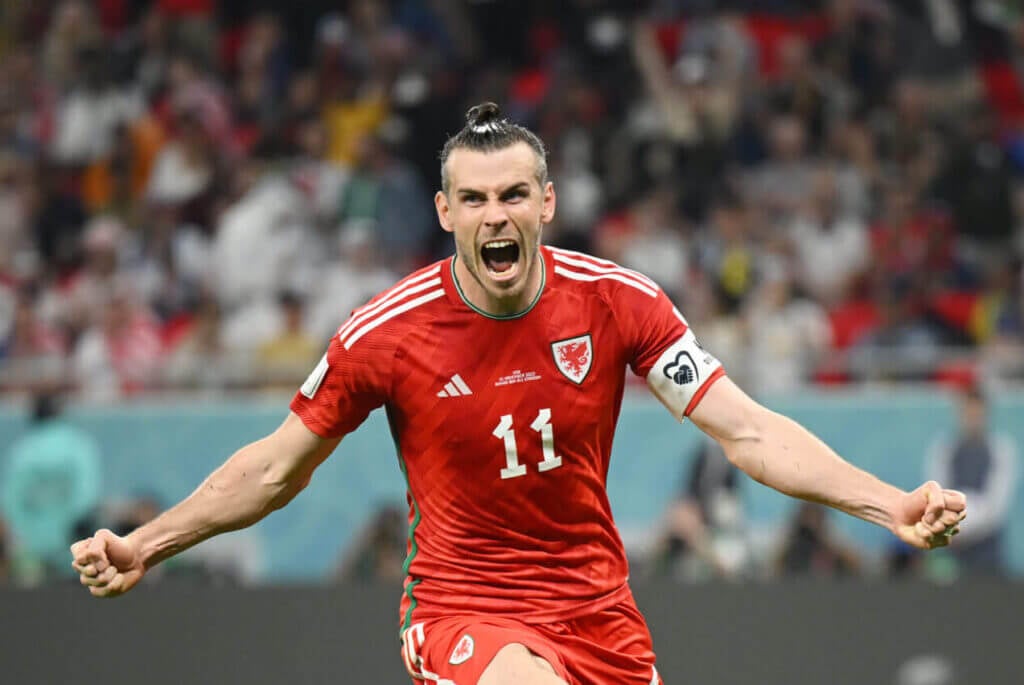 It was Gareth Bale to the rescue for Wales in their opening game of the World Cup against the U.S. men’s national team as the forward who now plays in MLS for Los Angeles FC scored a late penalty to cancel out Tim Weah’s first-half goal.

Christian Pulisic set Weah up brilliantly to put Gregg Berhalter’s side ahead at the Al Rayyan Stadium but Bale won a penalty with less than 10 minutes to go after a clumsy foul by USMNT centre-back Walker Zimmerman.

Earlier in the day in Group B, England had thrashed Iran 6-2 and they are the clear favourites to win the group.

Bale steps up when it matters

James: Aged 33, Bale tends to produce moments these days rather than performances — and nothing changed here. On the fringe of the game for so long — he had fewer touches than anyone else starting in a Wales shirt — Bale delivered when it mattered yet again.

For much of the game it had been hard to escape the feeling that the pace and tempo of the match was too much for Bale — which would have been no surprise given how little football he has played in the build up. Booked in the first half — harshly it should be said — Bale was unusually careless in possession. 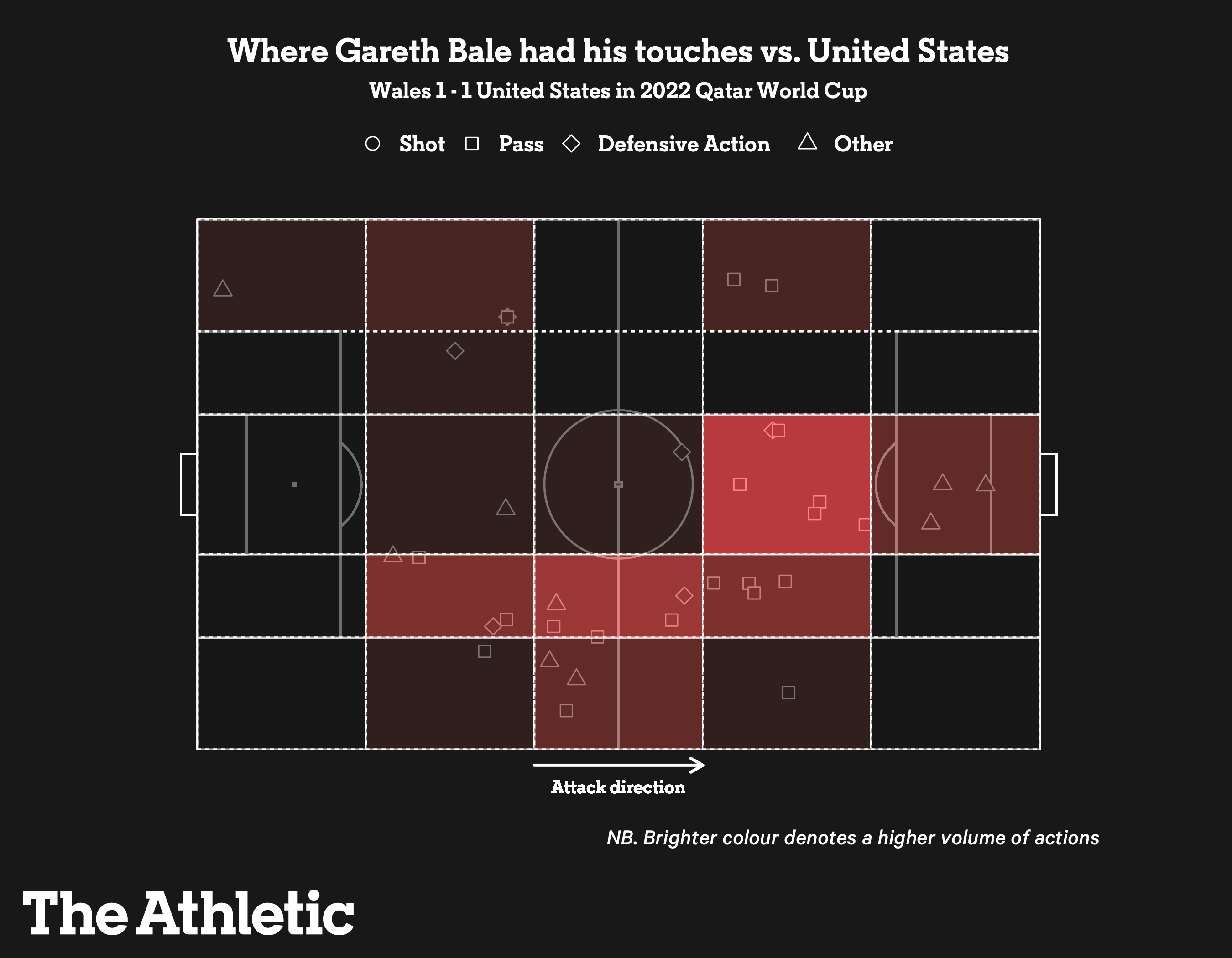 Bale being Bale, though, there was another chapter waiting to be written in his glorious Wales career. On the night he earned his 109th cap, to equal Chris Gunter’s record, Bale won and converted the penalty that earned Wales a deserved draw after a hugely improved second-half performance, aided by the introduction of Kieffer Moore.

Tenorio: Since breaking out with Borussia Dortmund as a teenager six years ago, Pulisic has carried a certain level of expectation on his shoulders. Pick a nickname. He is the Golden Boy. Captain America. Jokingly, in recent years, it’s been, “The Lebron James of Soccer.” The nicknames reflect both the pressure Pulisic has faced and how those hopes have changed as Pulisic’s career has aged.

Pulisic has not impressed at Chelsea. Even with the U.S. over the qualification cycle, he was inconsistent. And yet, in the biggest moments, Pulisic has found ways to impact games — for club and country. He remains the biggest star in the sport back home.

Entering the World Cup, Pulisic had learned that he did not have to do everything for this U.S. team. The U.S. have welcomed a core of stars to their roster: Weston McKennie, Tyler Adams, Tim Weah, Sergino Dest, Gio Reyna, Yunus Musah and Brenden Aaronson among them.

And yet Pulisic can never truly be just a cog in the machine. The U.S. ceiling is set by Pulisic. He is still the player most likely to turn a game on a dime. The player most capable of providing that ‘wow’ moment. And in his first World Cup game, Pulisic delivered.

The moments he finds space on the ball are rare, and so as he got on the ball in midfield and was able to run at Wales in the 36th minute, you could sense something dangerous could happen. Indeed, Pulisic showed that game-changing savvy, taking an extra touch to pull two Welsh defenders one step closer to him, then slotting in a pass that put Weah in for his goal.

In the second half, Pulisic continued to look dangerous, creating almost every dangerous opportunity for the U.S. It had been a five-year wait for Pulisic to get on this stage, and in that span the weight of his stardom has provided ups and downs. Even Pulisic has admitted some of how it has weighed on him. But in his first test at the World Cup, Pulisic looked up to the pressure — and more than capable of leading this U.S. team.

Page got his tactics wrong

James: There is no point sugarcoating it – Rob Page got his tactics badly wrong. It was a big call from the Wales coach to leave out Moore and pick Harry Wilson instead and it didn’t work.

“I just think pace up top has got us success,” Page said beforehand, explaining his thinking. “I’ve got footballers in the middle of the park if I want to create space to hurt the opposition, and to do that I need quick players up top and DJ (Dan James) falls into that category.”

That was the theory, but the reality was different. Wales were a team under siege in the opening 45 minutes, unable to retain possession, overrun in midfield and crying out for some sort of presence up front to give them an outlet in the face of the United States’ press.

Instead, Moore was watching from the bench as Bale and James struggled to make any impression. James couldn’t make the ball stick, which is not his game anyway. As for Wilson and Aaron Ramsey, they were so high when Wales were trying to play out that it was easy for the United States to smother Ethan Ampadu and force their opponents into a long, hopeful ball that inevitably came to nothing.

Moore was introduced at the start of the second half – a change that was as predictable as the sight of the United States taking the lead nine minutes before the interval, when Weah ran onto Pulisic’s clever pass and finished coolly.

Wales looked a totally different proposition with the Bournemouth striker leading the line.

Tenorio: The U.S. coach Berhalter had several tough decisions to make when it came to his starting line-up, among them whether to start Weah or Reyna on the wing opposite Pulisic.

His decision to opt for Weah had a clear tactical justification behind it. The U.S. needed Weah to provide a threat in behind Wales’ back line, a verticality that Reyna typically doesn’t bring. With Pulisic preferring to check back into midfield or find the ball in the half spaces, and Josh Sargent preferring to receive the ball more often with his back to goal, Weah provided a level of danger that forced Wales to respect how much space they allowed behind them. 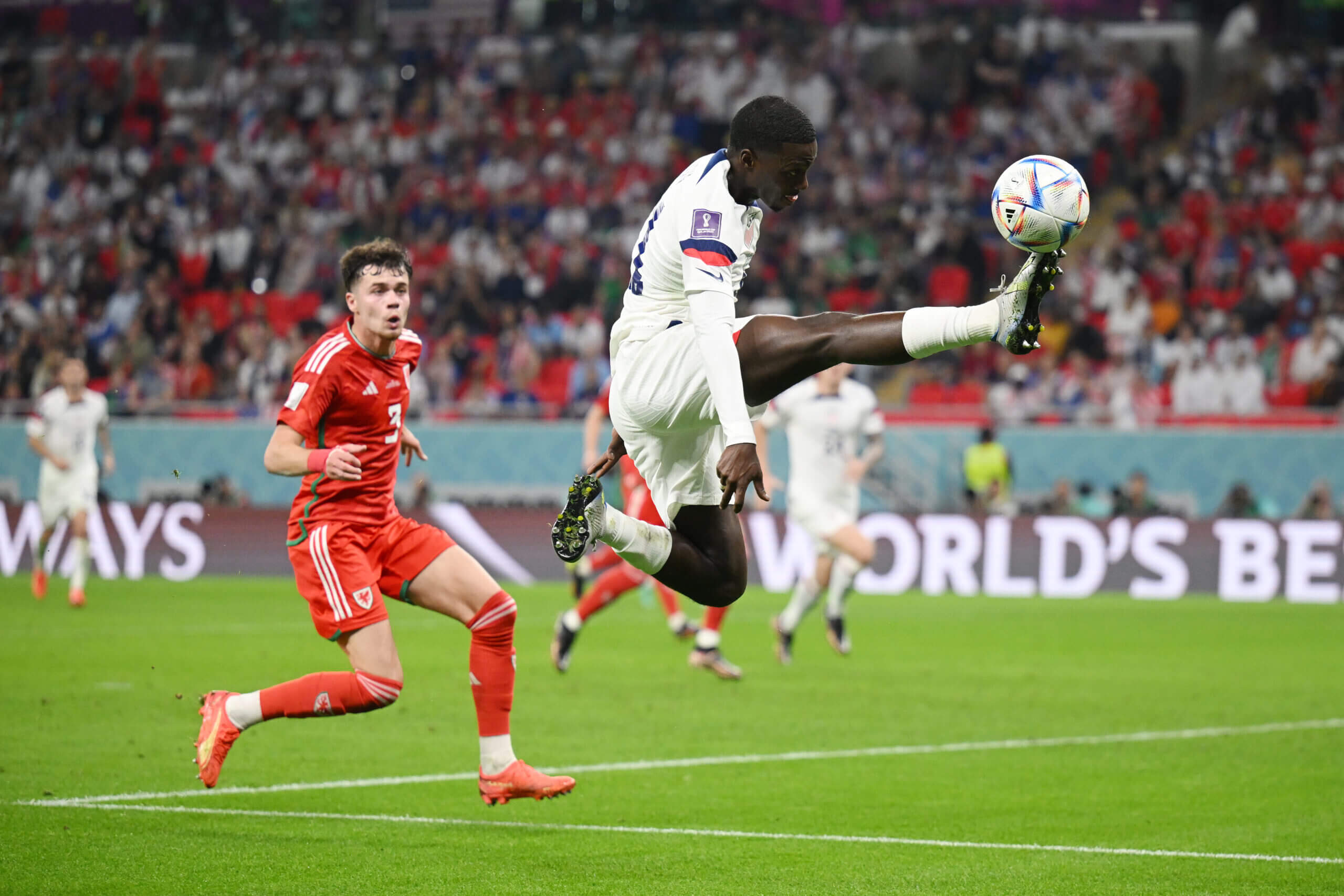 The choice was not an obvious one, though. Reyna is undoubtedly one of the most talented attacking talents in the team and his creativity in the final third might have added an element against Wales’ low block to help a U.S. team that has typically struggled to break down opponents.

Opting for Weah got exactly the result the U.S. had hoped when, in the 36th minute, Pulisic got on the ball in central midfield and drove at Wales’ back line. As the Welsh defenders moved to close Pulisic down, Weah sprinted into the space behind the centre-backs and Pulisic found him with a clever pass between the defenders. Weah then used the outside of his right foot to give the U.S. the lead.

It was exactly the type of movement the U.S. and Berhalter would have imagined from Weah.

Carey: Formations can often be misleading to represent what is actually occurring on the pitch, and it was difficult to determine what Wales’s midfield set up was across the game. Ampadu was anchoring the play, with Wilson to his left and Ramsey to his right. However, neither Wilson nor Ramsay are central midfielders in the typical sense, with both players’ attacking instincts meaning they were closer to the forward line than the midfield on plenty of occasions.

That meant gaps opened when the U.S. had possession, and Wales were unable to cover the width of the pitch in central spaces.

It is not Wales’s style to dominate the midfield. As covered in The Athletic’s World Cup group guides, Wales ranked bottom for possession (48.1 per cent) and open-play sequences of 10+ consecutive passes (78) during UEFA qualifying. However, this lack of presence in midfield meant that USA were able to dominate the central areas for long periods in the first half.

By bringing Moore on at half-time, Wales were able to take the midfield out of the equation, play higher up the field and get their attack-minded players on the ball with more territorial dominance. The contrast between the first and second period was stark. Wales were good value for their equalising goal.