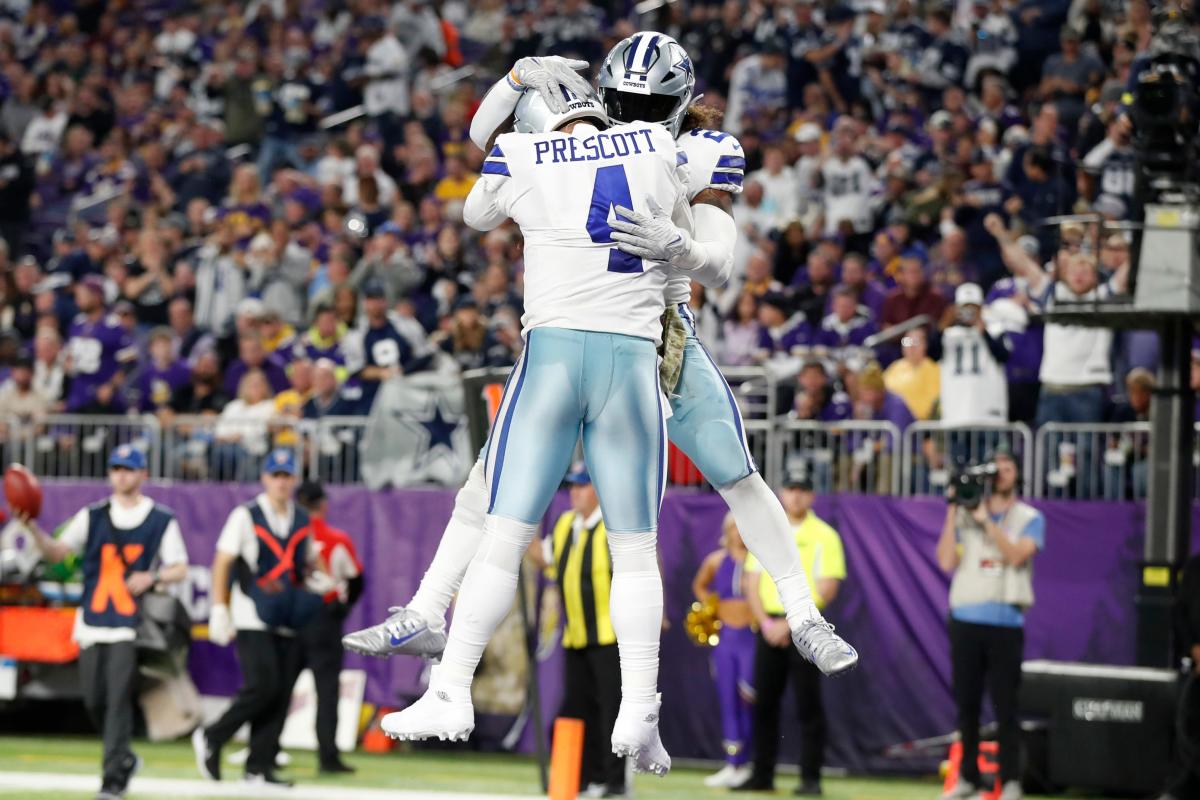 NFL Week 11 is in the books and a couple of teams in the Top 10 made big statements with big wins on the road, elevating them in our latest NFL power rankings.

The Dallas Cowboys dominated the Minnesota Vikings 40-3 in Minneapolis to improve to 7-3 on the season.

Check out how we rank the Cowboys and Titans now, as well as the other 30 NFL teams heading into Week 12 of the 2022-23 season, from lowest to highest. Previous ranking in parenthesis.

NFL Week 12 odds: Bills vs. Lions | Giants vs. Cowboys | Patriots vs. Vikings | Broncos vs. Panthers | Buccaneers vs. Browns | Ravens vs. Jaguars | Texans vs. Dolphins | Bears vs. Jets | Bengals vs. Titans | Falcons vs. Commanders | Chargers vs. Cardinals | Raiders vs. Seahawks | Rams vs. Chiefs | Saints vs. 49ers | Packers vs. Eagles | Steelers vs. Colts

Lost to Washington Commanders, 23-10, to fall to 1-8-1. The Texans look like they are going to have a stranglehold on the top pick in the 2023 NFL Draft, for whatever that is worth.

Lost to Baltimore Ravens, 13-3, to fall to 3-8. This team just doesn't seem to have the talent, or the quarterback play, to stay with most of the competition, although the Denver Broncos are up next on the schedule.

Lost to Atlanta Falcons, 27-24, to fall to 3-8. The Bears have lost their last three games by a combined seven points, even with Justin Fields' superhuman performances.

Lost to Cincinnati Bengals, 37-30, to fall to 3-7. The Steelers have some winnable games ahead, starting with the Colts on Monday Night Football in Week 12.

Lost to Las Vegas Raiders in overtime, 22-16, to fall to 3-7. The grass isn't always greener on the other side, Russell Wilson.

Lost to New Orleans Saints, 27-20, to fall to 3-7. The defending Super Bowl champions have now lost four straight games and face the Chiefs in Kansas City in Week 12.

Lost to Buffalo Bills, 31-23, to fall to 3-7. Deshaun Watson can return to the team after Week 12. Will it even matter for the Browns?

Entered bye in Week 11 with 3-7 record.  The Jaguars' schedule is tough. They have the Ravens, Lions, Titans, Cowboys and Jets up in the next five weeks.

Beat Denver Broncos in overtime, 22-16, to improve to 3-7. This team has had some tough breaks this season, but you can't forget that it always has a chance with Davante Adams catching passes.

Lost to Tennessee Titans, 27-17, to fall to 4-7. We thought the Packers might have turned a corner with their win over the Cowboys. The Titans turned them back in Week 11.

Beat Los Angeles Rams, 27-20, to improve to 4-7. Whenever we get ready to write off the Saints, they come up with a big win. The NFC South is bad, so that's good for the Saints' playoff chances.

Lost to San Francisco 49ers on Monday Night Football to fall to 4-7. Does anyone have any confidence that Kliff Kingsbury and the Cardinals can turn things around?

Lost to Philadelphia Eagles, 17-16, to fall to 4-6-1. The Colts had the Eagles on the ropes in Week 11. This team is playing hard under interim coach Jeff Saturday.

Beat New York Giants, 31-18, to improve to 4-6. Guess which team holds the longest win streak in the NFC? Yes, the Lions, who have won three straight games ahead of their Thanksgiving showdown with the Bills.

Beat Chicago Bears, 27-24, to improve to 5-6. This team just keeps surprising. We wouldn't be surprised if it somehow won the NFC South.

Entered bye in NFL Week 11 with 5-5 record. The Buccaneers have a half-game edge over the Falcons in the NFC South. The two teams interestingly face off to conclude the regular season in Week 18.

Lost to Kansas City Chiefs, 30-27, to fall to 5-5. This team has been decimated by injuries to its receiving corps but is still right in the thick of the AFC playoff hunt.

Beat Houston Texans, 23-10, to improve to 6-5. Ron Rivera's decision to stay with Taylor Heinicke seems to be the right one. After hosting the Falcons, the Commanders face the Giants before and after their bye week.

Lost to New England Patriots, 10-3, to fall to 6-4. The Jets' defense deserved better from its offense. Scoring three points just doesn't cut it.

Beat Pittsburgh Steelers, 37-30, to improve to 6-4. The Bengals appear back after a tough start to the season, but the Titans and Chiefs are next on their schedule.

Entered bye in NFL Week 11 with 6-4 record. The Seahawks' bye came at a perfect time after their loss to the Buccaneers. They have the Raiders, Rams and Panthers the next three weeks.

Beat Arizona Cardinals, 38-10, to improve to 6-4. This team is considered a legit Super Bowl contender by many and they sure looked the part in a dominating Monday Night Football win over the Cardinals.

Beat Carolina Panthers, 13-3, to improve to 7-3. The Ravens have won four straight games and have the Jaguars, Broncos, Steelers and Browns on the schedule next.

Beat Cleveland Browns, 31-23, to improve to 7-3. The Bills moved into a tie with the Dolphins for first in the AFC East with the win Sunday although Miami currently owns the tiebreaker.

Beat Green Bay Packers, 27-17, to improve to 7-3. After starting the season 0-2, the Titans' only loss was a 20-17 overtime setback at the Chiefs. Tough tests loom vs. the Bengals and Eagles.

Entered bye in NFL Week 11 with 7-3 record. The Dolphins have won five straight games entering their NFL Week 12 game against the Texans.

Beat Minnesota Vikings, 40-3, to improve to 7-3. The Cowboys absolutely destroyed the Vikings. We have to give them credit for that. They appear to be a legit Super Bowl threat in the NFC.

Beat Los Angeles Chargers, 30-27, to improve to 8-2. The Patrick Mahomes to Travis Kelce connection is special. How many touchdowns will they combine for as teammates?

Improved to 9-1 with 17-16 win over Indianapolis Colts. The Eagles did not impress in the win over the Colts, but a win is a win. This team is still 9-1.