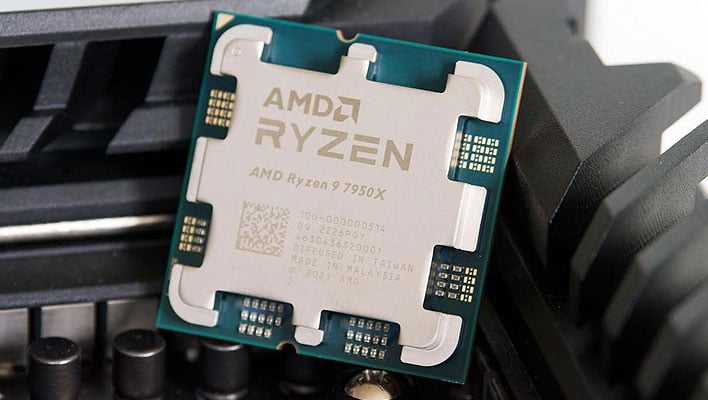 Just how low will AMD's pricing go on its freshly minted Zen 4 desktop processors? AMD appeared to answer that question earlier this week when all four of its Ryzen 7000 series CPUs fell to new lows, making them more competitive (from a bang-for-buck perspective) to Intel's Raptor Lake chips. But now just a few days later, AMD's flagship Ryzen 9 7950X is even cheaper.
You can score the Ryzen 9 7590X for $549.99 at Amazon. That's nearly $250 below its launch price, and down from $573.99 when AMD and its retail partners rolled out new pricing at the beginning of the week. Just be sure to scroll down and choose the “Sold by: Amazon” option—for whatever reason, the retail listing is defaulting to a marketplace seller that is asking $626.
Benchmarks and analysis can be found in our Ryzen 9 7950X review, but to briefly recap, it's a fast processor with strong single-threaded and multi-threaded performance. And as for the core specifications, you're looking at a 16-core/32-thread chip with a 4.5GHz base clock, 5.7GHz max boost clock, and 64MB of L3 cache. It also comes with integrated graphics.
This is another well-timed discount. Zen 4 introduced a new socket (AM5) and rides solo with DDR5 memory, so you have to factor in the cost of a motherboard and RAM when plotting a Ryzen 7000 series build. That's to say, you can't repurpose your existing AM4 motherboard and/or DDR4 memory.

Recently reduced pricing on the rest of AMD's Zen 4 lineup is still in effect as well (and might be permanent). Here's a look…