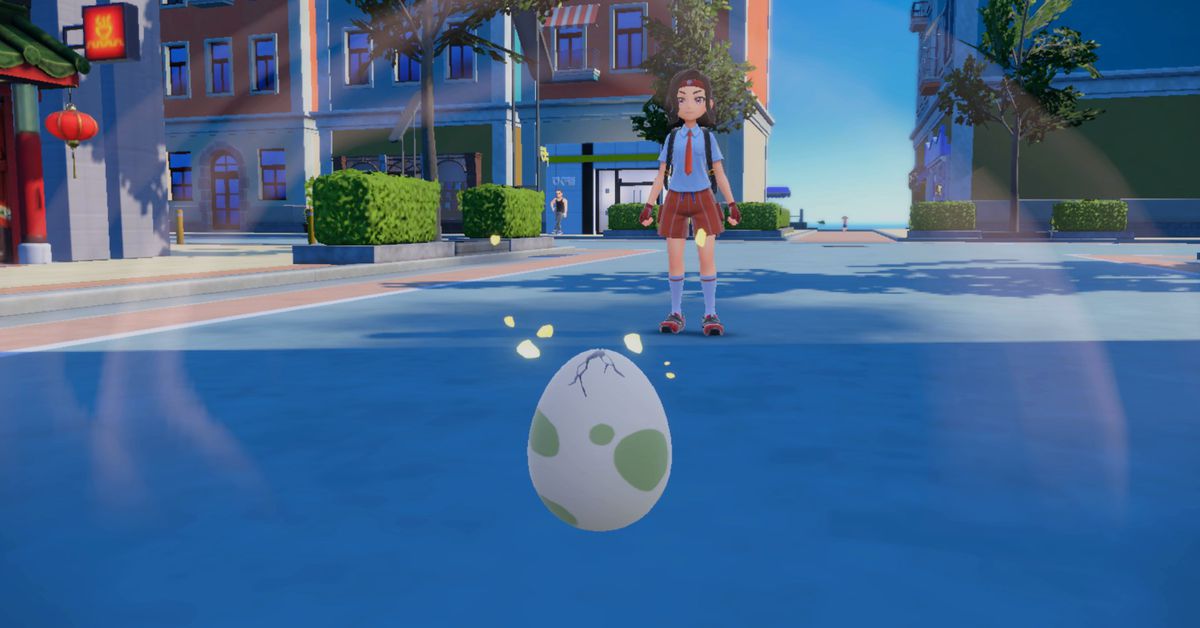 Breeding is a key part of the main Pokémon series, whether you’re hatching eggs to complete your Pokédex or crafting a competitive-worthy team with flawless stats. While the main breeding mechanics have stayed the same since their introduction in Gold and Silver, Pokémon Scarlet and Violet make a few key changes. Our Pokémon Scarlet and Violet eggs and breeding guide outlines how to get and hatch eggs, the items you’ll need for breeding, and how to breed the best possible Pokémon.

Which Pokémon can breed?

Pokémon are compatible if they share an Egg Group and are opposite genders; the resulting egg will be the same species as the female parent.

Alternatively, you can pair a Pokémon of any gender with a Ditto to breed more of the non-Ditto Pokémon, and this is the only way to breed genderless Pokémon, like Voltorb, or Pokémon that can only be male. Keep in mind that certain Pokémon, including some genderless Pokémon and most legendaries and mythical Pokémon, are in the “undiscovered” Egg Group and can’t breed at all.

How to get Pokémon eggs in Scarlet and Violet

In a major change from previous Pokémon games, there’s no Day Care where you can leave two Pokémon to generate eggs. Instead, you can find eggs while on a picnic.

Make sure you have two compatible Pokémon in your party — it’s easiest if you put the other four in your Pokémon boxes, which you can access from the menu — and set up a picnic. The next step is to wait! Walk around, make a sandwich, hang out. After a minute or so has passed, Pokémon eggs should appear in the basket near your picnic table. Press A near the basket to collect the eggswhich will be sent to your Pokémon boxes.

You can increase the spawn rate of eggs by eating a meal with the Egg Power bonus. Restaurants around Paldea will sell food with this meal power, and you can also make sandwiches with the Egg Power effect yourself during the picnic.

How to hatch eggs

Once you’ve collected some eggs, it’s time to hatch them. To do this, simply put the eggs in your party and walk (or ride Koraidon/Miraidon) around. (Some species take longer to hatch than others, so remember to be patient.) Keep in mind that you’ll need at least one non-egg Pokémon in your party at all times, and unlike with collecting eggs, you do actually have to move around to hatch them — idling doesn’t count.

To speed up the hatching process, you can include a Pokémon with the Flame Body, Magma Armor, or Steam Engine Abilities in your party. The most efficient way to hatch eggs is to limit your party so it’s just this Pokémon, with eggs taking up the remaining five slots.

Pokémon in Scarlet and Violet that can have Flame Body, Magma Armor, and/or Steam Engine:

How to learn Egg Moves and where to get Mirror Herb

Scarlet and Violet also make a convenient change to Egg Moves, or moves that a Pokémon could previously only learn through breeding. Like breeding itself, it’s also tied to picnics, and you’ll need a brand-new item, the Mirror Herbto make it work.

In your party, include a Pokémon that knows the desired Egg Move and the Pokémon you want to teach the Egg Move to; give the latter Pokémon a Mirror Herb to hold, then set up a picnic. The Pokémon holding Mirror Herb can learn any Egg Move its species is able to learn from any other Pokémon in your party, even if they’re the same gender, different species, or in different Egg Groups. This way, you don’t have to breed a brand-new Pokémon just for the Egg Move.

You can buy a Mirror Herb from the Delibird Presents store on the second level of Cascarrafa. They’re listed under “Battle items,” and each one costs 30,000. In battle, these are single-use items, so be sure to unequip it before battling so you don’t lose it!

Like in previous games, the parent Pokémon can hold items to affect what’s passed down to the resulting eggs. These items include the Everstone and the Destiny Knotand using them is the most effective way to breed a Pokémon with the stats and Nature you want.

A parent holding an Everstone will pass its Nature, which affects how its stats develop, to the resulting Pokémon. Giving the other parent a Destiny Knot to hold will ensure that five IVs (or base stats) will be passed down from the parents’ collective 12 base stats, meaning only one stat will be randomized rather than several.

With or without held items, eggs will inherit:

Eggs do not inherit:

Getting the baby Pokémon from eggs

Note that in a change from previous games, you no longer need Incense items to breed the “baby” Pokémon, like Azurill and Bonsly, from their respective evolutions, like Marill and Sudowoodo. Instead, all eggs from these Pokémon will hatch as the baby, or pre-evolution.

For example, in past games, breeding Marill or Azumarill without the Sea Incense item would result in Marill eggs, rather than Marill’s pre-evolution, Azurill. Now, every egg from a Marill or Azumarill will hatch into an Azurill, so you don’t have to sacrifice an Everstone or Destiny Knot to breed the baby Pokémon.

Shiny hunting with the Masuda method

As Jacq alludes to during one biology lesson, the Masuda method still exists in Scarlet and Violet. If you pair two compatible Pokémon from different-language versions of the game, the resulting eggs have an increased chance of being shiny. This stacks with the Shiny Charm to improve your shiny odds while breeding.