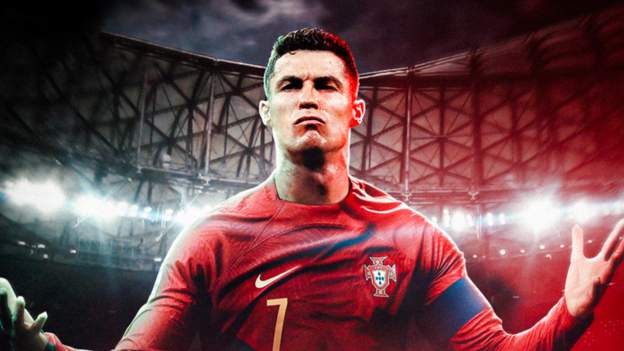 Fans heading to the Portugal-Ghana game would have been expecting a starring performance from Cristiano Ronaldo.

And he duly delivered at Stadium 974, which saw Portugal supporters leave smiling and Ghana fans left with a sense of what might have been.

Spectators witnessed history as the 37-year-old Ronaldo became the first man to score at five different Fifa World Cups as a 3-2 victory over Ghana gave the 2016 European champions the perfect start to this tournament.

The goal and result will be a welcome distraction from the off-field issues that has clouded Ronaldo's build-up to the tournament.

He was scathing of Manchester United and manager Erik ten Hag in an interview with TalkTV last week and subsequently left the club by ‘mutual agreement'.

“It was a week that finishes the chapter, it's closed. We won and I could help the team – the rest does not matter,” Ronaldo said after the game.

“This was a beautiful moment, my fifth World Cup,

“We won, we started with on our good foot and it is a very important win. The first match is crucial in these tournaments.”The first player to score goals at five World Cups, this makes me very proud.”

‘One of the best players ever'

Getting off the metro at Ras Bu Aboud Station outside the ground, a mother, son and daughter all had on ‘Ronaldo 7' shirts, with the boy saying he is “my favourite”.

Just outside the turnstiles, supporters were gathering and taking pictures with some running and recreating his famous ‘Siu' celebration.

Ronaldo was given a deafening cheer when he led his team out to warm up before the game and his name was afforded the loudest ovation when the Portugal teamsheet was read out.

As the side lined up for the national anthem, the camera panned to Ronaldo – the first man standing in the line-up – and he looked quite emotional while singing ‘A Portuguesa', with tears filling his eyes.

The frontman, who had earlier missed two big chances and had a goal ruled out, saw his big moment come in the second half.

With Southampton defender Mohammed Salisu in close attendance, Ronaldo hit the deck and the American referee pointed to the spot, which he stepped up to convert with aplomb.

Ronaldo darted off to the corner flag to perform his famous celebration, jumping and spinning round with ‘Siuuuu' ringing around the stadium.

“Cristiano Ronaldo is a phenomenon, a legend like many who have comes and gone before. In 50 years' time, we will continue to speak about him.”

Ronaldo was given a standing ovation when replaced by Goncalo Ramos with three minutes remaining and watched on aghast as Ghana's Osman Bukari scored for Ghana and performed his celebration.

But that record may well elude him as he will be only 41 by the time the next tournament takes place in 2026.

Ronaldo is the third player to be both a country's oldest and youngest goalscorer at the World Cup, along with Croatia's Ivica Olic and Denmark's Michael Laudrup.

Including World Cups and Euros, Ronaldo has now scored at 10 consecutive major tournaments.

“Ronaldo would have come into this World Cup with the record [of scoring in five tournaments] in mind,” former Portugal team-mate Jose Fonte told BBC Radio 5 Live.

“Records chase him and I'm sure he'll be extremely proud to score in five World Cups.

“It's great credit to his attention to detail, his professionalism and how he takes care of himself. It's a great achievement for him and for Portugal as well.”

Portugal midfielder Ruben Neves added: “It's Cristiano, everybody knows him. He is the best player in the world.

“He is really motivated, he is really focused on the national team and we are really lucky to have him with us because he can still help us a lot.”

Ronaldo would not have been given the opportunity to net his history-making goal had the referee decided Salisu played the ball or the video assistant referee intervened.

He told BeIN Sports: “The referee gave a penalty which was not a penalty – everyone saw that. Why? Because it's Ronaldo or something?”

Asked by a journalist in the post-match news conference if the penalty was given because Ronaldo is a superstar, Addo replied: “Ask the referee.

“I have no proof if he would have decided differently for someone else. There was a contact of players. I don't know what they were doing, was VAR not paying attention?

“The referee was not in our favour today.”

Former England defender Matt Upson called it “a dive” on BBC Radio 5 Live, adding: “There's a small bit of contact but there's not enough there to knock him down surely?”