Harry Kane’s ankle injuries – just how worried should England be? 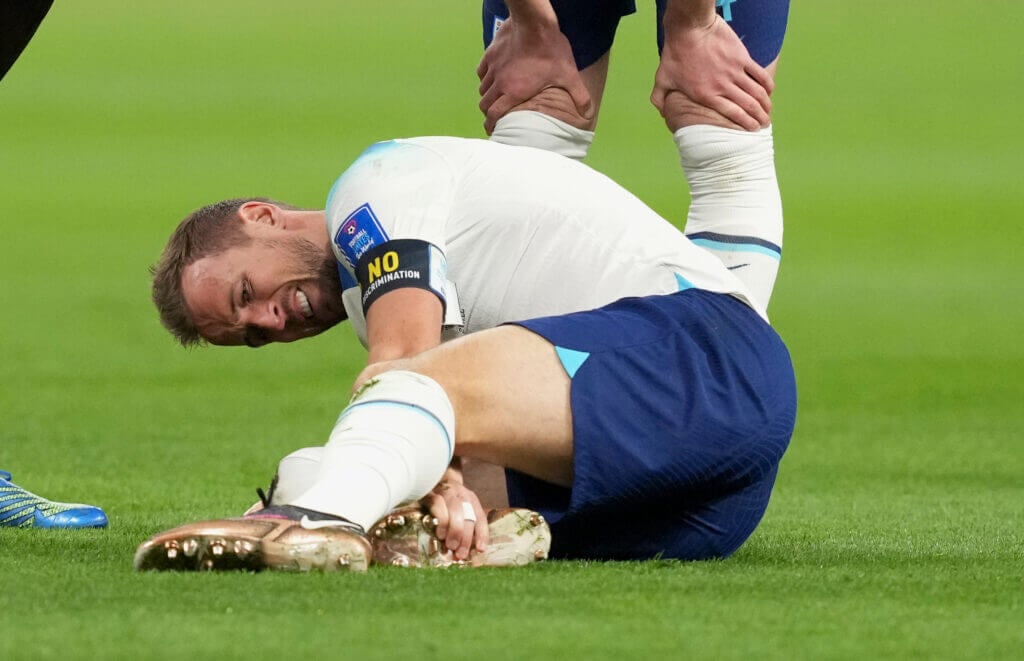 As England await results of the scan undertaken on Harry Kane’s right ankle — the result of a crunching tackle from Iran’s Morteza Pouraliganji on Monday — there are reasons to be optimistic.

The first time Kane sustained an ankle injury, in September 2016 when he was still just 23, it ruled him out for seven weeks. More than six years on, it remains one of the worst injuries of Kane’s career so far. He suffered another seven-week absence with an ankle ligament injury at the end of the 2018-19 season.

But the last two ankle injuries Kane suffered, in the first half of 2021, were far less disruptive. They only kept him out for seven days and six days. Both times Kane was able to come straight back into the Tottenham team without missing long spells of football.

The evidence points in a positive direction. It suggests that over time, Kane’s body has got better at resisting and shaking off these ankle ligament problems that have been suffered in the past.

Kane has also spoken this year about the work he has been doing with Dr Alejandro Elorriaga Claraco, a Canada-based sports medicine consultant who flies over to London to stay with the striker and work with him for roughly one week every month.

“I’ve seen changes in my body in terms of what my ankles were like before and now after,” Kane said in September. “I’m in a totally different place, so it’s really pleasing.”

Kane and Dr Elorriaga have been working together for three years now, during which time the amount of football the 29-year-old has missed with ankle injuries has very clearly decreased. Indeed, sources close to those who have worked with Kane have told The Athletic that they believed the player to have cracked the issue in recent times.

At this stage, we do not know for sure the seriousness of Kane’s injury, although — for all that the initial problem was deemed serious enough to warrant a scan — the mood around England’s camp on Wednesday was cautiously optimistic that he would be able to feature against United States on Friday.

It certainly looked painful, the ankle twisting under the weight of Pouraliganji as the defender tackled him early in the second half of Monday’s game. 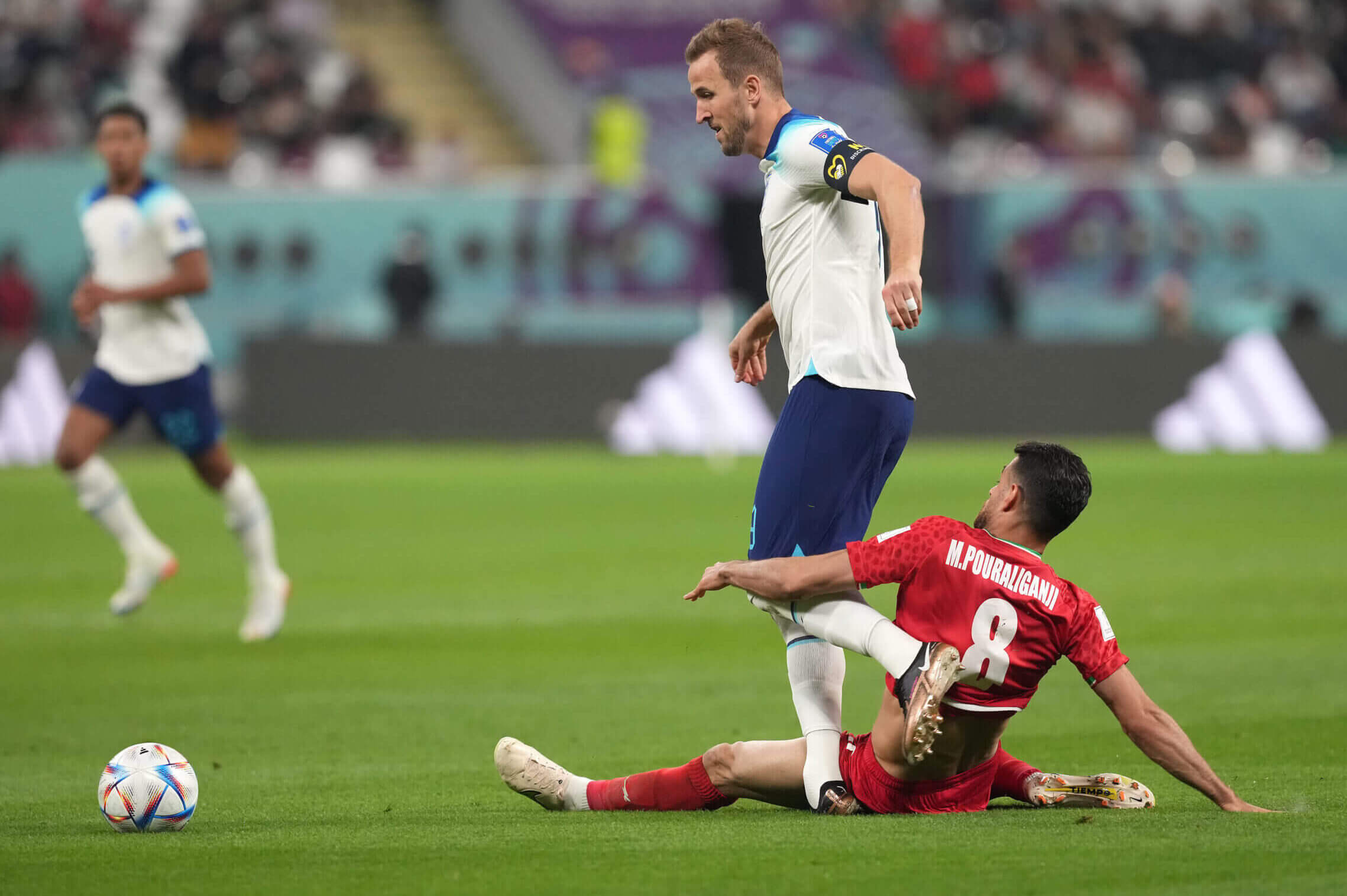 Kane played on for another 27 minutes before he was replaced by Callum Wilson. When he walked through the mixed zone that evening he had a slight limp and strapping on his ankle. Southgate said that evening that Kane was “fine”, while Jordan Pickford suggested on Wednesday afternoon, after his scan, that Kane was “a bit sore” but “out on the grass”.

Ultimately, we may not know much more until Gareth Southgate speaks to the media on Thursday evening. Or even until he names his team for the game against the US on Friday night.

But The Athletic has spoken to experts in the field of sports injuries — talking in general rather than about Kane’s specific case — to learn about ankle injuries, what causes them, and how they can be prevented…

How do ankles work?

“You won’t be surprised to know that the foot and ankle district is the most commonly injured district in football,” explains Dr Matt Stride, football medicine specialist at Isokinetic in London. “It has always been the most vulnerable area, purely because of its location and the nature of the game of football.”

In very simple terms, an ankle is made up of the tibia bone, the fibula bone and the talus. Then there are a series of ligaments that connect those bones together: three lateral ligaments on the outside, then a border, thicker ligament on the inside. The basic job of the ligaments is to stop excessive movement in the joint and to allow only a specific range of movement.

(It is more complicated than this: there is the capsule, which is the protective layer around the joint, there are tendons, and there are the smaller joints, talocrural and subtalar. But for our purposes, the most important parts are the ligaments.)

These matter because there is very little as important to a footballer as the full range of motion in the ankle. “The ankle has to be so flexible, whereas the knee, to a certain extent, is basically a hinge that goes backwards and forwards,” says consultant physiotherapist Nick Worth. “The ankle does more than that. Being able to circle your ankle in all different directions means that it’s got to be strong and able to take pressure in all of those directions, and sometimes that’s difficult to do.”

How do they get injured — and how often?

Broadly, ankle injuries can be separated into two types: non-contact injuries, when a player is running or jumping and a sudden change in direction or awkward landing causes him or her to go over the ankle and sprain the ligaments. Then there are contact injuries, when one foot is planted on the floor and a collision or tackle from an opponent puts force through the foot, spraining it.

There is another factor when it comes to ankle injuries that suggests some players are more susceptible to these injuries than others. “Another rule of injuries is that the biggest risk factor for having an injury is having a previous injury in the first place,” says Dr Stride. “So once you’ve already had an ankle sprain, a ligament-type injury, your chances of having another one are always that much higher than if you have not had one in the first place.” 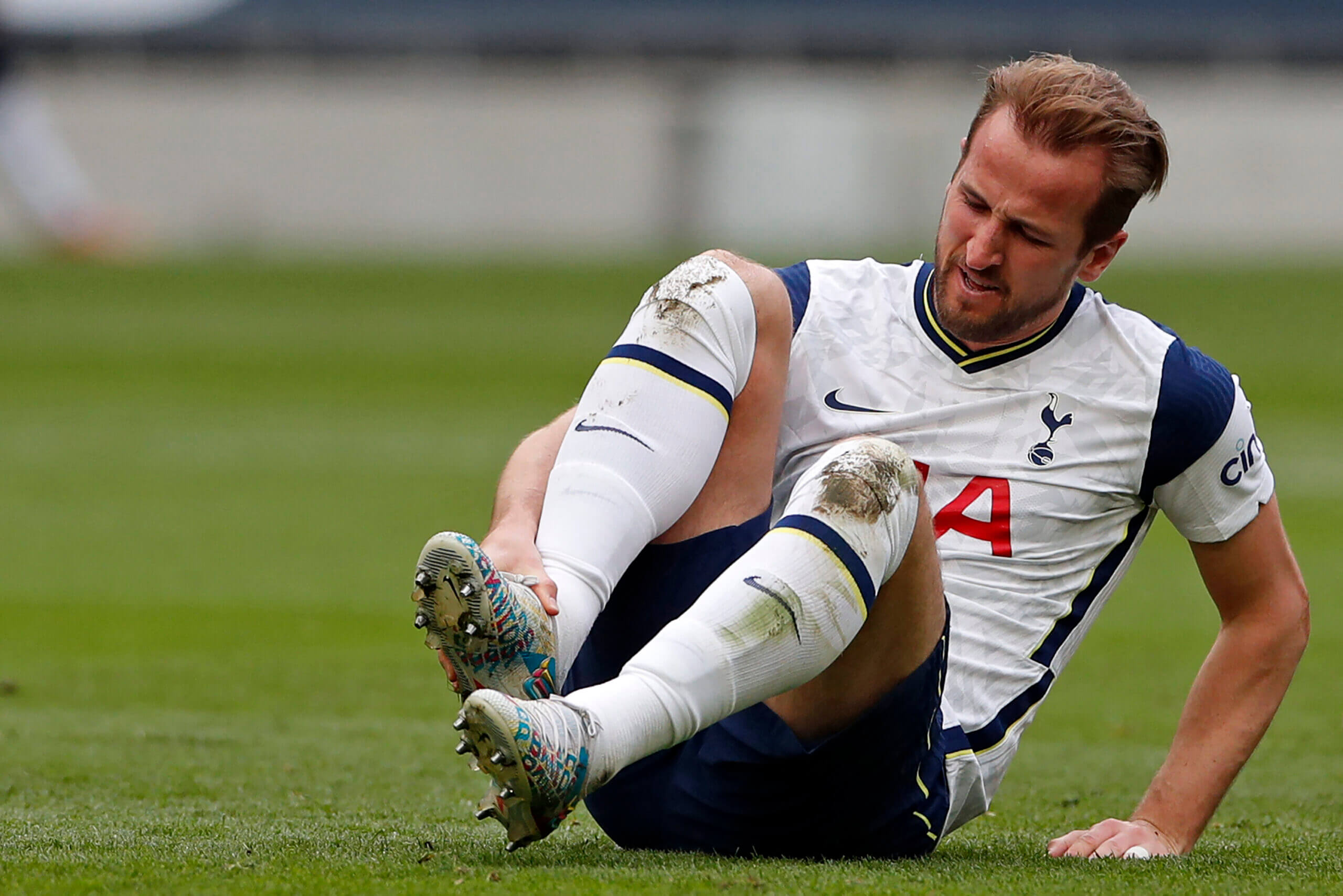 Harry Kane’s previous ankle issues do not necessarily mean he will be out for longer with future injuries (Photo: Andrew Couldridge/Pool/AFP via Getty Images)

But it does not necessarily mean that an injured ankle will get worse over time. There is a scientific basis for an ankle that has been repeatedly injured becoming stronger and therefore more resistant.

“Some people are able to deal with it better than others,” explains Worth. “If your ankle is flexible, then to a certain extent you’re able to take more pressure before there is damage on a ligament. On the flip side, if you had repeated ankle injuries, your ankle can go one of two ways: either it becomes a little bit tighter and doesn’t move as much, or, if you’ve got scar tissue in ligaments, sometimes they could be stretchier than they were before, more elastic, more flexible.”

There are cases when a player will have significant ankle ligament damage, which has necessitated a long lay-off, but which eventually leads to more laxity in the ankle. This means the player is more able to ‘rock’ the joint without badly damaging the ligaments.

(Worth was not talking about Kane’s ankles specifically, but this point has been made in the past about Kane’s ankle ligaments; that the injuries from previously in his career have made them more flexible now.)

How long does it take to recover?

When it comes to recovering from an ankle ligament injury, it tends to change at different levels of the football pyramid. Elite professional football has access to MRI scans and ultrasound scans, which has transformed the ability of clubs to do specific diagnoses and prognoses. But lower down the pyramid, it is not always easy to establish how injured a player is.

“What happens particularly at the lower end of the game, particularly at amateur level, is that the ankle sprain is one of the most trivialised injuries,” says Dr Stride. “With fractures, there is an acceptance that it is either fractured or not. But at a lower level, once they have an X-ray and it’s not a fracture, just a sprain, then it is often left to its own devices.

“But there can be a lot of issues with the strength and stability of the ankle joint if it is not properly managed. And then going back to football too soon on an ankle that isn’t strong or stable enough, that cycle can happen again, and these microsprains just build up and up and the ankle becomes weaker and more unstable.”

The key for all players, especially those recovering from ankle injuries, is to find a way to prevent the injuries from happening in future. Some call this ‘prehabilitation’. Players can work on their balance (or ‘proprioception’) on wobble boards, or by using pressure plates to assess how they land when they jump. They can do cognitive and neuromuscular work to establish how their muscles react to different situations. They can strengthen the muscles around the ankle joint in the gym.

“When you have an ankle injury, the proprioception is affected, so you want to make sure that when the player returns, your balance and proprioception is as good as you can possibly make it,” says Dr Stride. “Or if this is an injury that requires more rest and recovery, work on strengthening around the ankle and gradually building back into football again.”

Kane came into this World Cup having played the second-most minutes of any Premier League outfield player. While this is partly a reflection of his importance to club and his country — a player his managers feel they simply cannot rest — it is also true that Kane wishes to play as much as possible.

The good news for England is that all of Kane’s work in the last few years has clearly made him more resistant to serious ankle injuries of the sort that kept him out for six weeks or more at earlier points in his career. They will be hoping that if any damage was done on Monday, he will be able to shake off this one, too.