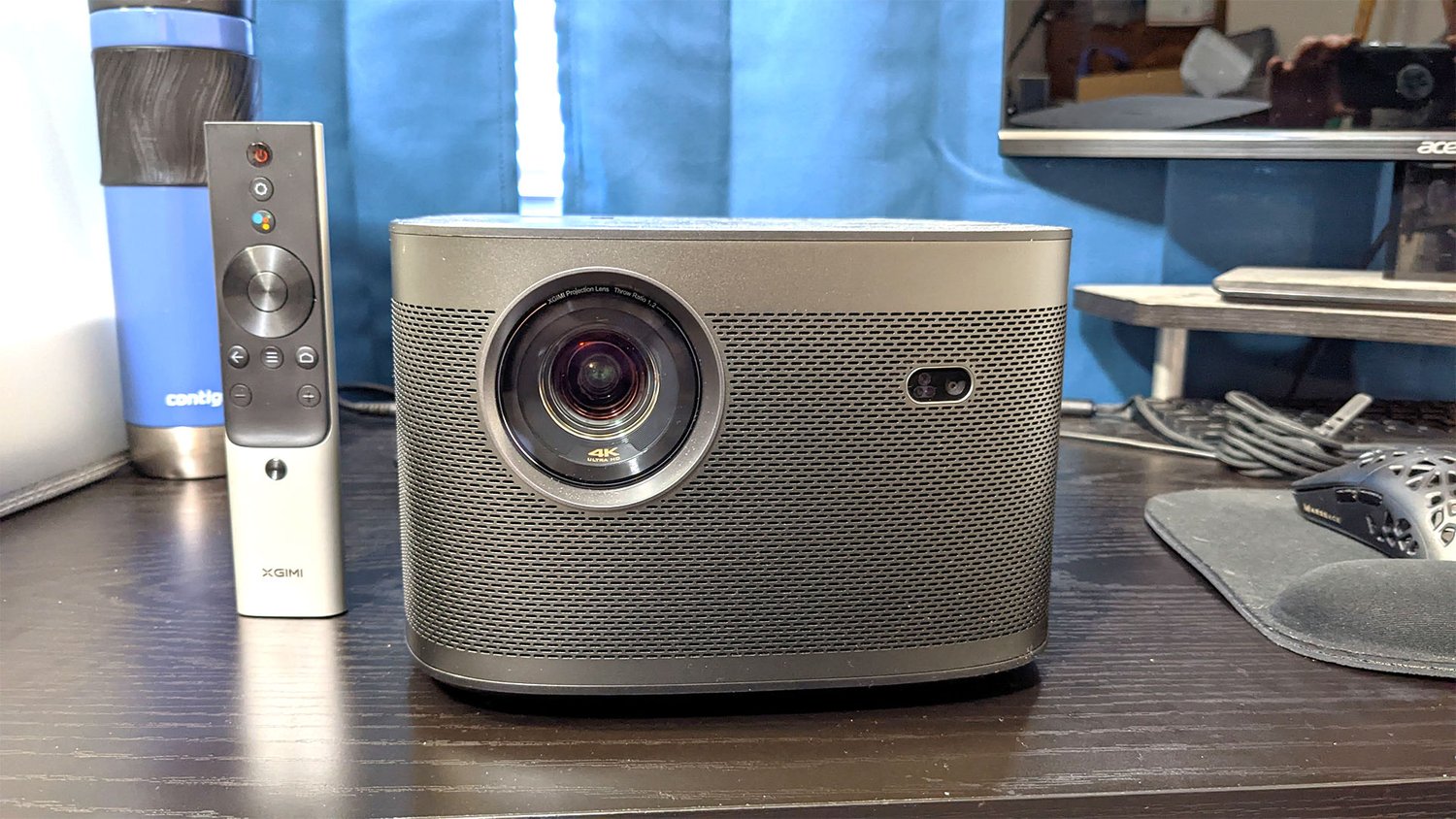 XGIMI is a company all about creating “multi-functional smart projectors and laser TV” in an effort to provide consumers with the best experience. One of their projectors is the Horizon Pro and they’ve been kind enough to send me one of these projectors to review. I’m thankful for the projector and all the thoughts below are my own thoughts. If you like what you read, you can grab your own Horizon Pro projector from XGIMI or Amazon with an MSRP of $1,899 (You can grab it for only $1275 between November 23-28).

First, what is the Horizon Pro? It’s a 4K UHD projector that is advertised as reaching a screen of 200” big. It’s rated at 2,200 ANSI lumens; has automated screen alignment, focus, and obstacle avoidance; built-in Android TV; a latency of 35ms in game mode; and is compatible with HDR10. Physically, the projector is measured at 208.4 x 218.4 x 136.2mm and only weights 2.9kg. The projector comes with a remote and features two HDMI ports (one is ARC supported), two USB ports, one LAN port, one 3.5mm headphone jack, one optical audio jack, dual-band AC Wi-Fi, and Bluetooth 5. If you don’t have a nice speaker system, the Horizon Pro includes two 8W Harman/Kardon speakers. It also includes 32GB of storage and 2GB of RAM.

Now, how does all this work in the real world? Really well! I love the Horizon Pro projector. It is not the brightest projector out there, but the 2,200 ANSI lumens still works pretty well with some lights on, although the fewer the better. I don’t have a projector screen, but unless I was really close to the wall, I didn’t even notice the wall’s texture. It works very well without a screen. Also, the auto obstacle avoidance and focus work so well and fast. There are times where the obstacle avoidance seemed to struggle, but it was always when the projected screen started reaching onto the ceiling and several walls. If I was able to adjust it so that it didn’t hit the ceiling, it always was able to accurately auto adjust. That being said, you can manually adjust the screen size as well to get things even more perfect. The Horizon Pro was also a snap to set up. The one downside is that it struggles with some apps natively such as Netflix, but it has a built-in Chromecast, so that’s really not a big deal.

I took some time and hooked up both my Nintendo Switch and my Xbox Series S to the Horizon Pro. It once again performed really well. I set it to Game Mode and had no problems with any of the games I threw at it. There was not noticeable lag and the picture looked fantastic. I’m definitely looking forward to the holidays when I see family and we can throw the big party games on a huge wall with this thing.

One thing to note with the Horizon Pro is that it has motion smoothing as a feature. This can create an image that is ultrasmooth and is a little divisive. The positive is that you can turn it off in the Settings, so if you hate it, you don’t have to live with it.

I mostly used my soundbar with the Horizon Pro, but I did take some time to check out the built-in speakers. They’re not speakers that you would want to use long term, but they are surprisingly good. The audio is clear and possibly even better than many built-in TV speakers. If you are unable to connect better speakers for whatever reason, the built-in speakers will do the job just fine. I would recommend getting a nicer set or soundbar though.

I feel like I’m being a little nitpicky when it comes to finding cons for the Horizon Pro. My biggest complaint is that the remote doesn’t have a source button. I also am a little annoyed that the remote isn’t rechargeable (it takes two AAA batteries). My only other complaint is that it could be brighter. Like I said, 2,200 ANSI lumens is not bad, but more is always nice.

Overall, I would recommend the Horizon Pro from XGIMI if you can afford it. It’s a solid 4K HDR10 projector that works well for movies, TV, and gaming. The auto adjustment features are fantastic, built-in Android TV and Chromecast make it so you can watch basically anything, and you don’t need a screen. This gets a big thumbs up from me.

‘Paris’: How Supertramp Thrilled The City Of Light

Finally, Titans Gave Gar Something to Do