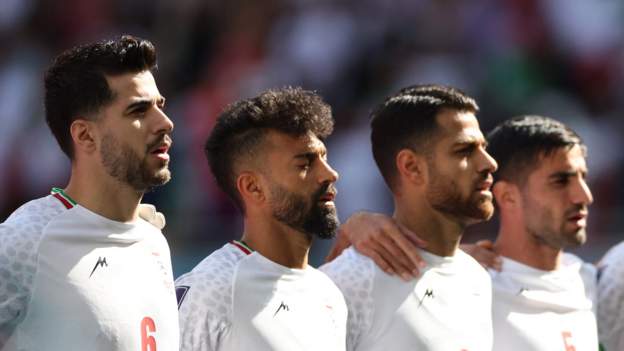 Iran's players sang their national anthem before Friday's World Cup game against Wales after not doing so before their opener against England.

As the players joined in with the anthem on Friday, loud jeers could be heard from Iran fans in the stadium.

Mass protests in Iran in recent months have been met with a fierce crackdown.

They have been sparked by the death in custody in September of Mahsa Amini, a 22-year-old woman who was detained by morality police for allegedly breaking the strict rules around head coverings.

A woman in the crowd against Wales had dark red tears painted under her eyes and held a football jersey with “Mahsa Amini – 22” printed on it. 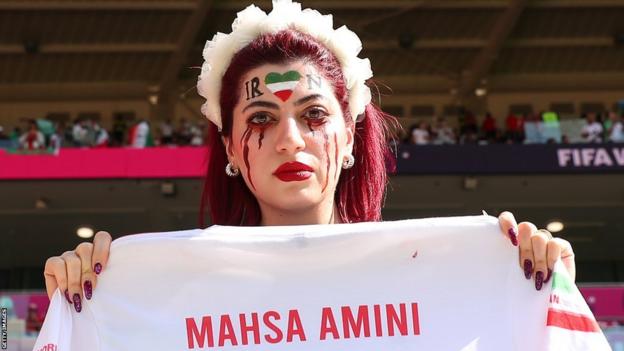 Human rights activists have said more than 400 protesters have been killed and 16,800 others arrested in a crackdown by Iran's security forces.

Iran's leaders say the protests are “riots” orchestrated by the country's foreign enemies.

Before Friday's game, Iran striker Mehdi Taremi said the players were “not under any pressure” after not singing the anthem against England.

Iran manager Carlos Queiroz, who is from Portugal, was sitting next to Taremi at the news conference and said: “It's your right to do those questions, but what what I feel strange, as a normal citizen of the world, is you don't ask the same kind of questions to the other coaches and other national teams, knowing that they have so many problems at home, and cause so many problems all over the world.”