An important part of qualification testing is running the processor through a wide variety of benchmarks and stress tests to make sure it performs properly in each workload. That's one reason that we constantly see “leaks” of new and upcoming processors as their work gets sorted into benchmark databases and filed in distributed computing projects.

We have another such leak today, and it's over at Rensselaer Polytechnic's [email protected] project. This is a distributed computing platform based on BOINC that is attempting to create an accurate 3D simulation of the entire Milky Way galaxy. While that's the stated goal of the project, it's really more about developing and improving resililent and fault-tolerant algorithms for internet-based distributed computing. 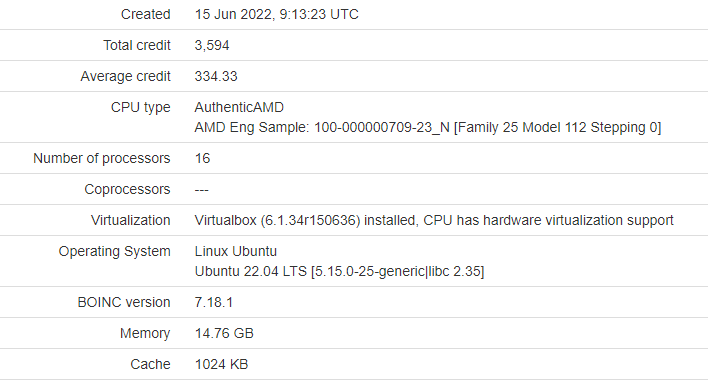 Like most BOINC projects, the [email protected] effort maintains a database of all of the machines that have contributed to the effort, and the electric eye of Twitter bot @Benchleaks noted a curious entry in that database. We've screenshotted the relevant portion above, but you can go have a look at the entry for yourself if you'd like. What's notable about this entry is exactly what it is.

You may recall that way back in February of last year, developer Patrick Schur leaked the model names and CPUID values for AMD's first two Zen 4-based processors. Well as it happens, the CPUID value that he gave for Phoenix happens to correspond with the family, model, and stepping values given for the “AMD Eng Sample” processors. The BOINC entry also lists 16 processors, which would line up perfectly with an 8-core-with-SMT Phoenix Point mobile chip.

The only other notable data point from the [email protected] database entry is the cache listing, which shows 1 MB. This value typically indicates the L2 cache of the processor. We heard late last year that Zen 4 would feature double the L2 cache per core compared to Zen 3, and this also perfectly lines up with that information, confirming the leak from Hans de Vries.

Given that we're seeing this kind of leak of this new CPU, these chips can't be too far out from release. Barring the discovery of some major hardware errata, we'd estimate that we'll see Phoenix Point laptops early next year, but it's not impossible that AMD could hurry things along and get the chips out in Q4 of this year.

Delays and cancellations plague the start of 4th of July travel