Share
Facebook Twitter LinkedIn Pinterest Email
EVGA has begun accepting orders for its E1 open air chassis with unique cable suspension design, and you can order it with or without some hardware components thrown into the mix. You'll need to bring a fat stack of Benjamins, though—pricing starts at $1,599.99 and that's just for the frame with a vertical VGA kit included. From there, the price more than doubles or triples, depending on whether you're interested in the E1 Kit 1 or E1 Bare Bones package.
The ultra-premium pricing reflects that this is not your typical PC case, even in the realm of open air designs. For the shell, EVGA uses 100 percent 3K plain weave carbon fiber for a relatively featherweight 2.76 pounds. According to EVGA, this makes it lighter than any other chassis with the same volume. Of course, it will weigh more once you add hardware to the mix.

When EVGA first showcased the E1 earlier this year, it said it had a patent pending on its independent suspension system. Steel cables run form the frame to the motherboard tray to keep your setup suspended.

Also unique is the set of analog gauges at the bottom of the chassis. There are three, one each for monitoring CPU, GPU, and system temperatures, They sit atop an I/O panel with dual USB 3.2 Type-A ports, a USB 3.2 Gen 2 Type-C port, 3.5mm headphone and microphone jacks, and a power button. 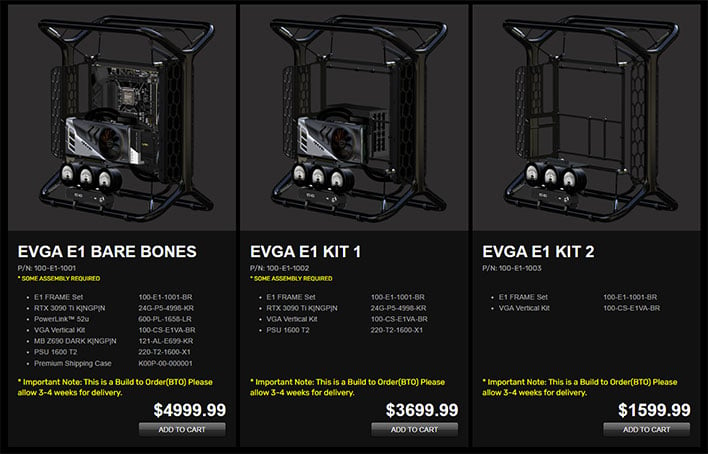 This has the potential to be a stunning showpiece, but not a cheap one. You're looking at $1,599.99 or $3,699.99 before adding a motherboard, CPU, RAM, or storage. Regarding the motherboard, the E1 supports all the major form factors, including Extended ATX (E-ATX), ATX, micro ATX (mATX), and mini ITX.

The $3,699 E1 Kit 1 adds EVGA's SuperNova 1600W 80 Plus Titanium power supply and GeForce RTX 3090 Ti Kingpin Edition graphics card. And if you splurge on the $4,999 E1 Bare Bones config, you'll get those same parts, plus a Z690 Dark Kingpin motherboard, PowerLink 52u, and premium shipping case that EVGA says is worth $800 by itself.

EVGA's timing is a little unfortunate, at least for the ones that come with components, as there are several next-gen hardware launches on the horizon from AMD, Intel, and NVIDIA. There's also a 3-4 week lead time on the E1, so that puts you up to a month closer to next-gen CPU and GPU launches.