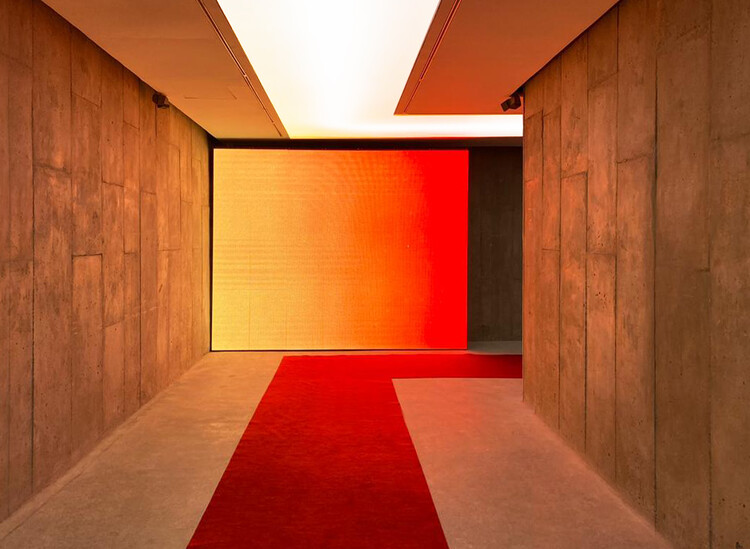 Text description provided by the architects. After the opening of “Argo Contemporary Art Museum & Cultural Centre” led by ASA North, the firm showed another side to their practice: one focusing on atmosphere, assemblage, and curation rather than the traditional architectural efforts that the museum’s visitors associated with the firm.

Located in the underground gallery of Pejman Foundation’s Argo, ASA North designed the layout for an exhibition named ‘For the Sake of Calmness’ with its sister studio ASA South. The show focuses on a film by renowned Iranian photographer Newsha Tavakolian that goes by the same name as the exhibition. The film’s premiere at this exhibition was a 20-minute personal visual experience that came together after the artist interviewed over 100 women, over nearly four years.

ASA North–South’s design transforms the dead-end underground gallery space into “a never-ending space” by placing a borderless mirror at its end, accompanied by an inviting red carpet. This also allows visitors to watch the film directly on the screen or indirectly via its reflection on the mirrored surface.

The general atmosphere of the exhibition is an experimental take on reality that centers on sensory stimulation. According to the curators “we thought it would be interesting to transform the tunnel-like finite space into a “welcoming and seductive” infinite space. Our memory is used to experience films in dark spaces and here, the lights were kept on during the exhibition of the film in the middle of a mirror and a screen. This “in-between” zone, together with the artist’s monologue, provoked the senses and simultaneously was intimate and distant”.

About the exhibition design of For the Sake of Calmness, the artist states: The effect was intense – “Like the viewer is inside the film”.

My Favourite Tools for Working With JavaScript | by Tommaso De Ponti | Jun, 2022