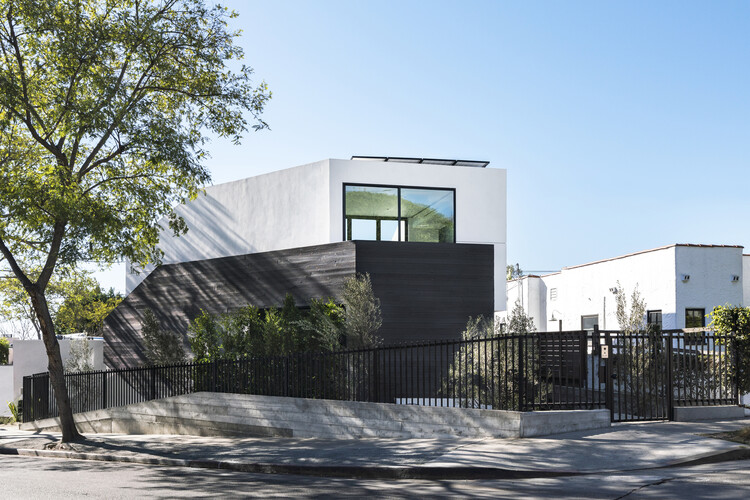 Text description provided by the architects. The design emphasizes the aesthetics of an object as an intrinsic value over concepts of architecture as a neutral placeholder for human activity. This concept is rooted in the fertility of design on its own and its transformative power, both socially and economically.

The basic concept for the design stems from the application of quantitative and qualitative parametric variables as applicable to its context. These variables begin with quantitative criteria such as the orientation of the building for solar optimization and noise reduction, to qualitative criteria such as respecting the views of the adjacent neighbors.

The directionality of lines in architecture has power due to the gravitational forces exuded by the earth and foreseeable forces of nature such as earthquakes. Horizontal architecture is more difficult to realize and build than vertical architecture. When the mass tectonics are shifted horizontally, not only does this mass break and diminish in scale, but it also relegates power and excitement to its reader. The spatial arrangement is derived from peeling and lifting the landscape in a spiral order to shape the floor plates of the project that follow the natural topography of the land in a split-level configuration.

Through a series of operatives that imbue actants, the primary mass is shifted to allow for proper orientation and integration with the communal space. These operatives provide for an internal/external living space, through setbacks on the ground floor or by orienting the openings toward the street. The garage is also oriented to allow direct access to the building.

Unusual Constraints. The main challenge of this project was to maximize the performance both in function and spatial on a very small triangular-shaped lot with a slope. The zoning regulations applied challenging conditions to this two-family zoned site that would’ve made the project unfeasible with a traditional side-by-side approach to massing. The project was designed as two intertwined units, shaping along a spiral continuum platform, that starts at ground level and extends to the roof. This allowed both units to take advantage of yards and deck while having uniquely separate presence and entrances from two street sides. The two units operate independently and in single-family residences without having privacy or access to either compromised by each other.