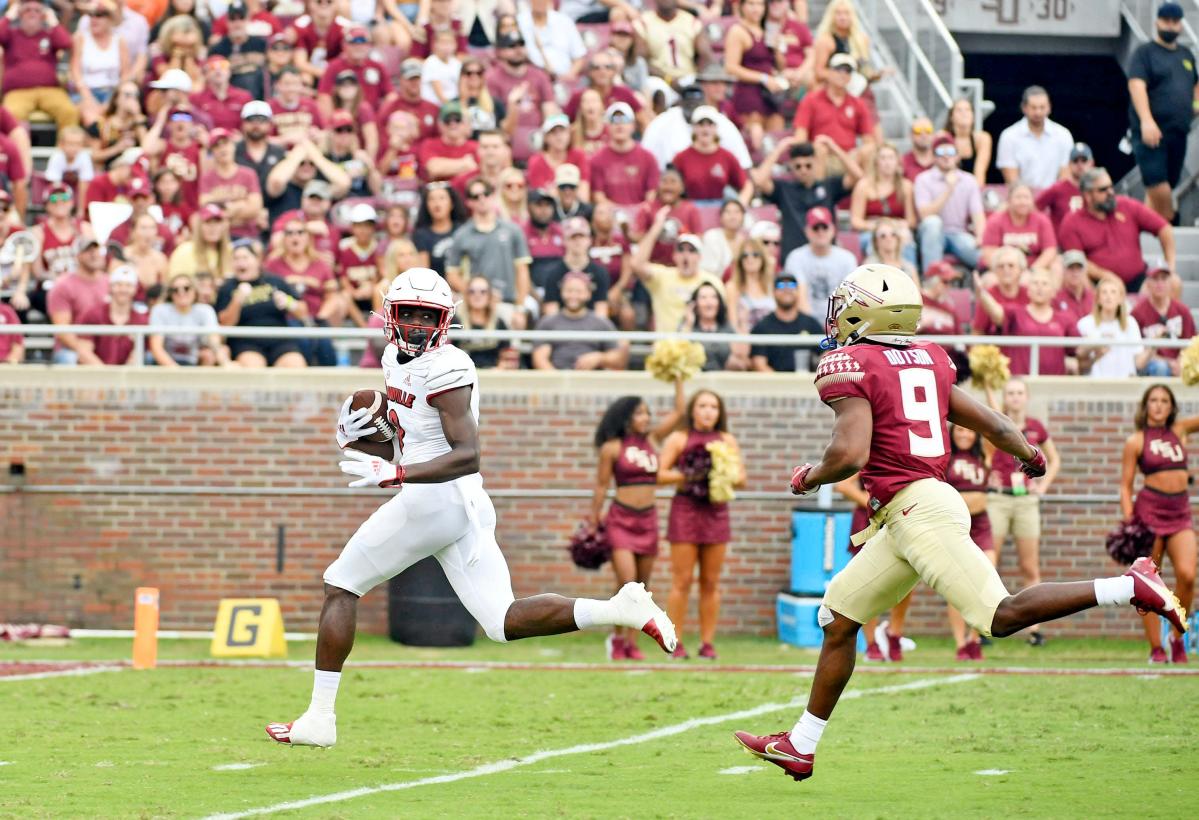 James Hardwick was in Bradenton, Florida when he first witnessed the speed of Tyler Harrell.

Harrell was a sophomore at Christopher Columbus High School in Miami, but he caught the attention of Hardwick at the 2016 state track meet. Coaching for another school, Hardwick watched Harrell grab the baton from a relay teammate and rocket past other runners.

Hardwick was hired to coach sprinters at Columbus the next season.  Hardwick said Harrell wasn’t the only reason he joined but the opportunity to coach him was certainly part of it.

During that time, he saw firsthand the speed that made Harrell an attractive addition for Alabama football this offseason via the transfer portal. The former Louisville receiver will be needed to help fill the Crimson Tide's void at the position.

Harrell replicating Williams’ remarkable season is not a small ask. Williams finished with 79 receptions for 1,572 yards and 15 touchdowns after transferring from Ohio State. Harrell is best suited to fill a similar role to Williams in the offense.

Like Williams, Harrell has scary speed. The kind that keeps defensive coordinators up at night.

“He’s No. 1 in my coaching career as a sprinter,” Hardwick said, a coach for almost half a century.

In his senior year alone, Harrell won Florida’s 200-meter race and was on the 400-meter relay team that won the state meet. It's worth noting he competed in 4A, the highest high school level in the Sunshine state.

“He’s got to be one of the finest young men I’ve ever coached in my life because he works real hard,” Hardwick said. “He’s a hard worker. He doesn’t like the L. He loves the W.”

Harrell  was offered a scholarship to run track for Miami  but turned it down to go to Louisville to play football. He caught 18 passes and averaged 29.1 yards along with six TDs in 2021.

The transition to Alabama might come with some adjustments, but being around elite athletes is nothing new for Harrell.

As a high-school junior in 2017, he was on the 100-meter relay team that won state alongside future Alabama cornerback Josh Jobe, future Miami cornerback Trajan Bandy and C.J. Henderson, a future first-round NFL cornerback. They finished the relay in 40.97 seconds, with Harrell running the anchor leg.

“He can run,” Hardwick said. “I’m not exaggerating. I’m not giving you a bunch of bull. He can move.”

The numbers back it up. At the Louisville pro day, he was hand-timed in the 40-yard dash at 4.19 seconds and officially clocked at 4.24. The record at the NFL combine is 4.22.

Hardwick said in their discussions every week that he and Harrell talk about wanting him to be one of the fastest in the 40.

Finish with an official time in that range, and Hardwick will be the first of many in Harrell’s career lining up to get a chance to work with the speedster.

“He wants to catch some touchdowns from Bryce Young, and carry the legend the receivers have built through the years,” Hardwick said. “He wants to be the next great receiver to come through Alabama.”

Nick Kelly covers Alabama football and men's basketball for The Tuscaloosa News, part of the USA TODAY Network. Reach him at [email protected] or follow him on Twitter: @_NickKelly

Memphis Depay insists he wants to stay at Barcelona