Rather than little green men, the astronauts who put their boots on Martian ground are more likely to be greeted by green-streaked skies.

Scientists have known for more than 15 years that auroras, vibrant light shows in the atmosphere, exist on Mars. The planet's auroras were found in small spots that seemed to sprout from the ground like mushrooms. The light canopies they formed are thought to come from what's left of a magnetic field that decayed billions of years ago.

But researchers have just seen a new gigantic aurora on Mars unlike any other previously observed. They're calling the phenomenon a “sinuous discrete aurora” to describe its enormous wormlike shape: a glowing twisted band of ultraviolet light stretching thousands of miles from the dayside, which faces the sun, to the back of the planet.

A United Arab Emirates Space Agency probe orbiting Mars, known as Hope, took the picture using an ultraviolet spectrometer device. The discovery raises new questions about Mars’ atmosphere, the composition of its ancient magnetic field, and the effects of solar wind — the gases flowing off the sun that make up so-called “space weather.”

Mars rover rumbles by crashed artifacts in the Martian desert 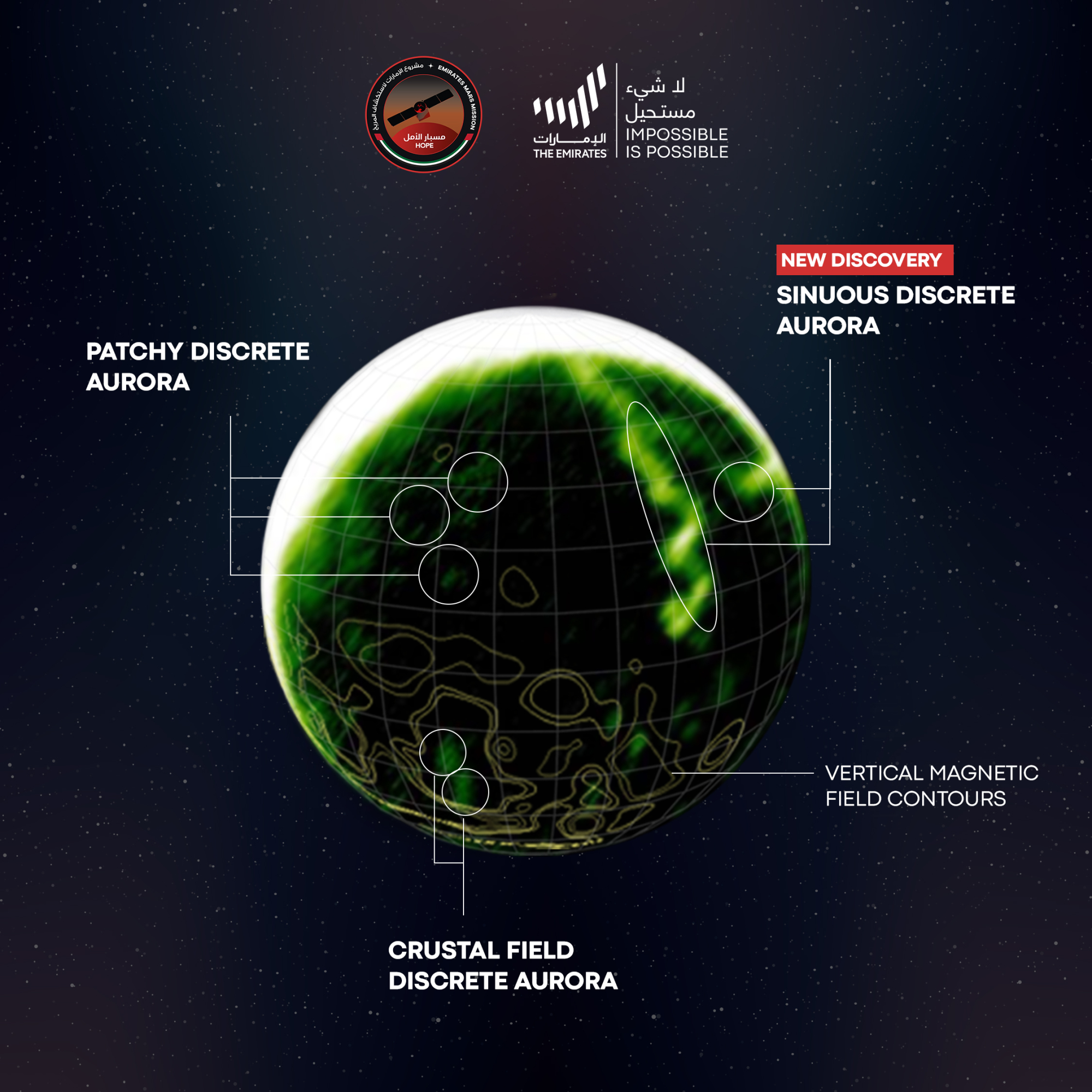 A snapshot from the United Arab Emirates' Hope orbiter shows a new green wormlike aurora wrapping from the dayside of the planet to the nightside.
Credit: Emirates Mars Mission

When the Hope probe arrived at Mars last year, mission leaders soon realized its distance from the planet afforded them an opportunity to essentially “zoom out” and study the planet on a broad scale. After the first few images came from the 3,000-pound, SUV-sized spacecraft, they decided to home in on auroras, said Hessa Al Matroushi, who heads the mission, in a statement.

What scientists have seen in Hope's snapshots has blown them away, said Rob Lillis, a planetary space physicist and Emirates Mars Mission collaborator based at the University of California, Berkeley. Since November, the team has seen several more instances of the wormlike lights, he said.

Most people associate auroras with the Northern Lights, a brilliant light show sometimes visible on Earth at night near the North Pole. A similar effect happens near Antarctica as well. Electrons that are shot out of the sun during solar storms travel along magnetic field lines at the planet's poles into the atmosphere, interacting with the air.

Auroras “were mysterious for the longest time on Earth before we understood that they're actually space weather and high-energy streams of electrons, coming originally from the sun, and basically guided by a planetary magnetic field,” Lillis told Mashable. “Whether it's Earth or Mars, those electrons smash into the atmosphere, and they cause the atmosphere to glow.”

Electrons always follow magnetic field lines and can't wander off course. So why then does this one region of Mars' sky look like a meandering, twisted worm?

That's the mystery researchers want to solve using a combination of spacecraft run by the UAE space program, NASA, and the European Space Agency.

“We don't understand what's causing this yet.” 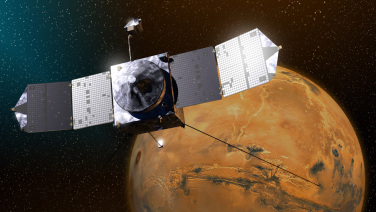 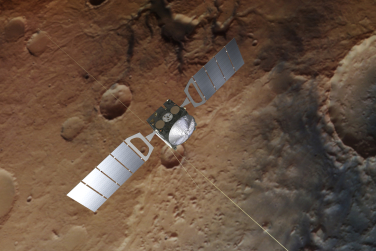 One is NASA's Mars Maven mission, launched in 2013. The other is Mars Express, an ESA mission that began operations in 2004. Both probes are observing the planet from a close range, sometimes swooping by at less than 200 miles away. The UAE's Hope is much farther out, with its lowest point being more than 12,000 miles away.

Its distance gave the Emirates orbiter a distinct advantage. For the first time, scientists had an unprecedented overview of the planet and its atmosphere, revealing Mars at different times of the day, and through different seasons. Lillis suspects the other probes may have taken pictures of tiny parts of these massive wormlike auroras before, but they only were able to capture tips of the iceberg, so to speak.

The next step in the study will be for the NASA and ESA orbiters to take measurements of the electrons moving toward Mars during a turbulent solar storm when they are in the region of the wormlike aurora. At the same time, Hope will take pictures of the lights.

“That would be the real holy grail,” Lillis said, “if we could get simultaneous measurements of both the cause and the effect.”

How to Remove Unread Count on Gmail

Star Wars: Knights of the Old Republic II is coming to Switch