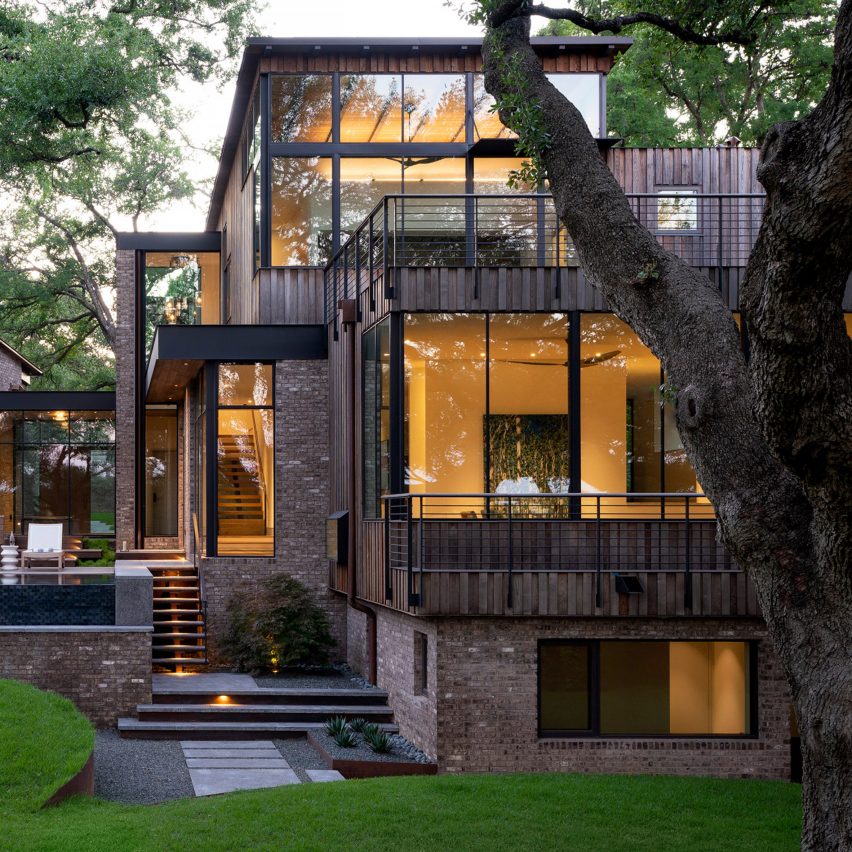 US studio Sanders Architecture included a glazed bridge for a Texas house wrapped in tan-grey brick and thermally modified ash that will weather over time.

Pemberton Heights House sits on the western slope of Shoal Creek in Austin, amongst a copse of heritage live oak trees that are endemic to the region.

“The footprint of the home and the form of the building were guided, even dictated, by the location of the trees and the shape of their canopies,” said local studio Sanders Architecture.

The 5,948-square-foot (553-square-metre) home consists of rectilinear volumes positioned around outdoor spaces, including a backyard terrace and swimming pool.

Informed by the site conditions, the home has setbacks, protrusions and varying heights that give it a dynamic appearance.

Near the front of the house, a semi-attached, two-storey volume is accessed by a walkway on the lower level and a glazed bridge above.

The natural landscape's colours and textures influenced the facade materials. In addition to variegated brick, the team used wood siding made of thermally stabilized ash that will take on a grey patina over time.

The exterior also features concrete and weathering steel, which are meant to visually ground the building on the sloped site.

Inside, the team used neutral tones and earthy finishes such as white oak and quartz. The layout is divided between public and private spaces.

One side of the ground level holds the kitchen, dining area, living room and den. The other side contains an office that doubles as a bedroom.

Upstairs, the team placed a bedroom and the main suite. Additional sleeping space is found in the basement.

The home's levels are connected by a staircase with a painted steel structure, oak treads and a metal mesh railing with an antique finish.

In the semi-detached volume, there is a garage at ground level and a media room on the upper floor. 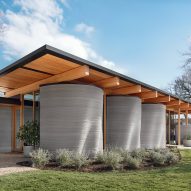 Given that the client desired a connection to the terrain, the team incorporated ample glazing.

“The windows in the house are positioned so that the occupant experiences the landscape and trees from most of the interior spaces,” the studio said.

In areas where privacy was a concern, the team used a light well that penetrates two levels. The carved-out void enables soft, natural light to enter the upper-level bedrooms while also bathing the kitchen in sunlight.

Glazed doors lead to the rear yard, where the pool foregrounds the oak trees and marks the property's connection to the creek. In the front of the property, an entry gate is covered by a canopy with kinetic louvres.

Other homes in Austin include a residence by Clayton Korte that is composed of gabled forms clad in limestone and fibre cement and a home for an architectural photographer by Side Angle Side that has dark grey walls and a crisp silhouette.

The photography is by Ryann Ford.