Snap today announced the launch of its latest hardware product, the Pixy drone that is designed to be used with the Snapchat social network. Pixy joins the Snap Spectacles, Snap’s other hardware device. 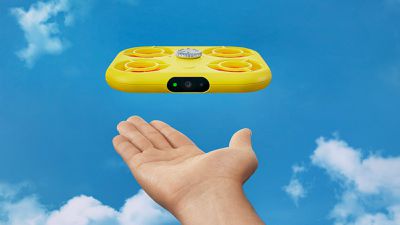 Priced at $230, Snap’s Pixy drone is essentially a pocket-sized flying camera. It has a top button that can activate one of four preset flight paths, and it can float, orbit, and follow the user without a controller.

There are two cameras on the Pixy drone, one that’s used for navigation and landing (it’s able to land on your hand at the end of a flight), and a second that’s for recording 2.7K video. Videos captured by Pixy are transferred and saved to Snapchat Memories, and can be used with Snapchat’s editing tools, Lenses, and Sounds before the content is shared on the social network.

Snap’s information on the Pixy is a bit limited, but reviews have suggested that the battery lasts for about four flights before needing to be recharged. Snap is selling extra batteries for the device.

Snap has been working on this drone for some time now, and there were first rumors about a drone product back in 2017.

Snap’s Pixy is available starting today in the United States and France and can be ordered from the Pixy website.

The camera-equipped Wristcam accessory for the Apple Watch is being updated with FaceTime-like video calling, the company announced today. For those unfamiliar with Wristcam, it is an Apple Watch band that adds an 8-megapixel camera and a two-megapixel selfie camera to your wrist, with the camera able to hold up to 2000 photos or an hour of video. The device connects to the Apple Watch over…

Samsung is planning to use a battery production technique normally used for electric vehicles to create more energy-dense smartphone batteries, in a move that could improve the battery life of future iPhone models, The Elec reports. Image via iFixit Samsung SDI, Samsung’s battery and energy division, intends to use a production technique it currently uses to make fifth-generation batteries…

Apple today published its 2022 Environmental Progress Report, setting out the company’s ongoing efforts to reduce its impact on the environment and combat climate change, as well as new details about its increased use of recycled materials. Apple has introduced certified recycled gold and more than doubled its use of recycled tungsten, rare earth elements, and cobalt. Almost 20 percent of…

Twitter today announced that it has been working on an edit feature “since last year,” with testing on the edit button set to begin “in the coming months” with Twitter Blue subscribers. In a demo of the feature on the Twitter app, users are able to click on the details button of a tweet to see an “Edit Tweet” entry that joins the already available Delete Tweet, Pin to Profile, Change who…

Users are reporting excessive battery drain after updating to Apple’s latest iOS 15.4 update, claiming that their iPhones are no longer lasting as long as they used to before downloading and installing the newest iOS version. Users have taken to Twitter to voice their poor battery life experience on iOS 15.4, tagging the Apple Support account in hopes of finding a solution. “What’s wrong…

For this week’s giveaway, we’ve teamed up with Moment to offer MacRumors readers a chance to win a $500 gift card that can be used to purchase anything from the Moment site, including the company’s MagSafe accessories, iPhone camera lenses, iPhone cases, camera bags, microphones, and more. Moment bills itself as the marketplace for photographers and filmmakers, and the site has long been…

Apple last month released the fifth-generation iPad Air, with key new features including an M1 chip, 5G support for cellular models, an upgraded front camera with Center Stage support, and up to a 2x faster USB-C port for data transfer. As it turns out, Apple also made an internal change to the device that repair advocates may appreciate. iFixit image showing fifth-generation iPad Air’s …

Apple today announced that it has officially launched its Self Service Repair program, letting United States customers repair their iPhones from their homes. To do the repairs, Apple is offering a $49 rental kit that consists of all the tools needed to repair an iPhone 12 or iPhone 13 lineup model and the third-generation iPhone SE, and possibly unexpectedly, the kit is rather large. On its …

Amazon this week has introduced a slate of deals on the 12.9-inch iPad Pro, with markdowns hitting every configuration of the 2021 tablet. You’ll find the full list of sales below, with prices reaching as much as $399 off these devices. Note: MacRumors is an affiliate partner with some of these vendors. When you click a link and make a purchase, we may receive a small payment, which helps us…

Apple’s upcoming iPhone 14 Pro models are widely rumored to feature new displays with a pill-shaped cutout and a hole for the Face ID sensors and front camera, respectively, and now a real-world look at this design has seemingly surfaced. Front glass panels for all four iPhone 14 models have allegedly surfaced on Chinese social media website Weibo, as shared on Twitter by @SaranByte and…

Last week, we compared the Apple Studio Display to the much cheaper and feature rich Samsung M8 Display, and the comparison was popular with MacRumors readers, so we thought we’d pit the Studio Display against yet another competing option, Dell’s UltraSharp 27-inch “U2723QE” 4K USB-C Hub Monitor. Subscribe to the MacRumors YouTube channel for more videos. Priced at $655 on sale, Dell’s…

Two new smart water bottles from HidrateSpark are now being sold in Apple’s online and retail stores, allowing users to automatically track their water intake and sync it to Apple Health. The $80 HidrateSpark PRO STEEL, available in silver or black, is a vacuum-insulated 32-ounce water bottle with both chug and straw lids and an LED puck at the base that lights up in customizable colors and…

Here’s What the Studio Display’s Webcam Looks Like After 15.5 Beta Firmware Update

Apple today released new beta firmware for the Studio Display, which is available to Studio Display users who have the macOS Monterey 12.4 beta installed on their Macs. The updated firmware includes a fix for the webcam, so we thought we’d take a quick look to see the tweaks in action. Subscribe to the MacRumors YouTube channel for more videos. Prior to the launch of the Studio Display, review…

Apple today announced it has launched its self-service repair program for the iPhone. Announced late last year, the program will let iPhone 12, iPhone 13, and third-generation iPhone SE users conduct certain repairs at home in the United States, with plans to launch in Europe later this year. Subscribe to the MacRumors YouTube channel for more videos. Apple says that genuine repair manuals…

Apple today released a new firmware update designed for the AirTag item trackers. The update has a build number of 1A301 (firmware version 1.0.301), up from 1A291. There’s no word on what new features the firmware might add at this point in time as Apple has not provided release notes. It is not possible to force an AirTag update, as it’s something that’s done over-the-air through a…

The U.S. Proposes $1 Million Fine On Colonial Pipeline For Safety Violations After Cyberattack