The most astounding and important black holes in the universe

They don’t have a surface, like a planet or a star. They’re only visible by their shadows. And, if their stealthiness weren’t unsettling enough, they serve as galactic drains, swallowing celestial material that comes a hair too close to their “event horizons,” aka points of no return.

During a star’s death, an enormous amount of solar material collapses onto itself, packing tightly into a small space and forming a black hole. But some are more vast and mysterious, millions to billions of times the mass of the sun. The gravitational pull of a black hole is so strong, nothing — not even light — can escape.

When it comes to invisible space objects, we know it’s tough to compare one to another.

No worries: Mashable has developed a rating system (proprietary) that scores black holes based on mass, spin, location, orbiting companions, historical significance, and flair — not to be mistaken for flarethe X-rays that can sometimes rapidly shoot out. When we say “flair,” we mean each hole’s unique I don’t know what.

Since the extraordinary scientific breakthrough rolled out by the Event Horizon Telescope on May 12, 2022, we’ve adjusted our rankings. Congratulations, Sagittarius A*, you supermassive black hole, you. You’ve just landed yourself a much higher, coveted spot on the list.

Cygnus X-1 is the black hole that started it all.

Though it was discovered in 1964 as a source of mysterious X-rays, the scientific community didn’t agree it was a black hole for another three decades.

Stephen Hawking famously lost a bet placed in the 1970s over whether Cygnus X-1 included a black hole, and Hawking’s concession in 1990 was a symbol of how far observational science had come in its thinking on the controversial subject. Now it’s one of the most studied objects in space, with scientists learning new information about it even today.

Cygnus X-1 feeds on a blue companion star and is 21 times the mass of the sun. 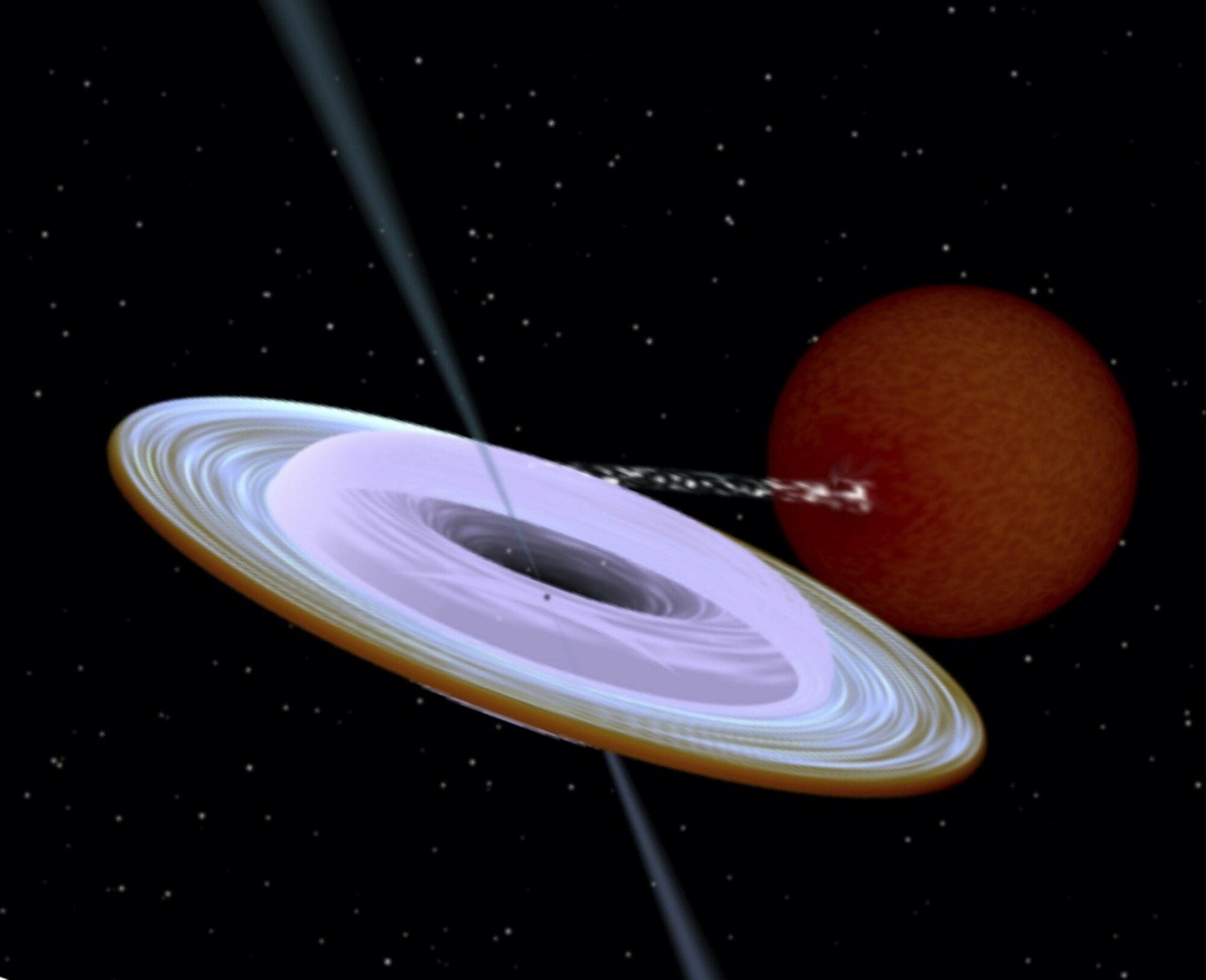 This one spins on its side.

Researchers found a system composed of a collapsed star pulling matter away from a companion star — in other words a black hole and white dwarf orbiting tightly around one another. Called MAXI J1820+070, the duo is located in the Milky Way about 10,000 light-years from Earth. To make matters weirder, the black hole’s tilt and its orbit are on totally different axes.

The fact that this tilted black hole exists challenges theories on how holes form. Just how tilted is it? Astronomers measured the orbital axis of the system and compared it to information known about the black hole’s spin. The data revealed the rotation axis was tilted more than 40 degrees from the system’s orbital axis. 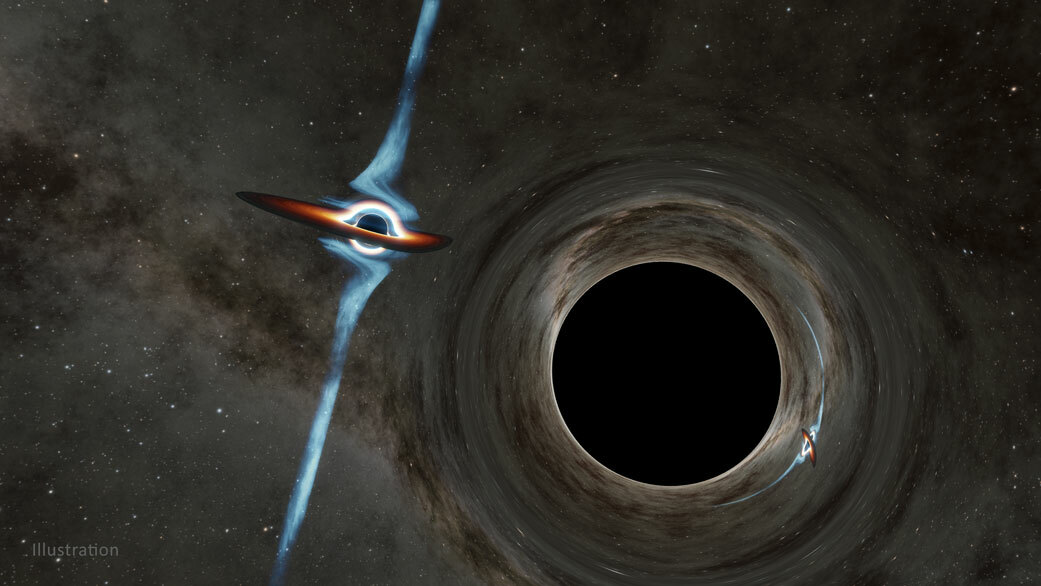 A pair of black holes in PKS 2131-021 gets closer to merging.
Credit: Caltech-IPAC

A supermassive black hole 9 billion light-years away appears to have a giant buddy that’s getting a little too close for comfort.

It took 45 years of radio data to come to this conclusion, said Joseph Lazio of NASA’s Jet Propulsion Laboratory in Southern California in a statement. The two black holes circle one another every two years.

The impact is expected to happen in about 10,000 years. That might seem like a long time from now, but it would take 100 million years for black holes of this size to begin orbiting and then merge. NASA said these two are more than 99 percent of the way to their big crash.

When a star comes too close to a black hole, like the one here in the PGC 043234 galaxy, its gravity causes tidal forces that can rip the star into shreds.
Credit: NASA/CXC/U. Michigan/J. Miller et al.; Illustration: NASA/CXC/M. Weiss

Scientists caught a black hole at the center of a galaxy 290 million light-years from Earth in the middle of a gruesome feast.

When a star comes too close to a black hole, like the one here in the PGC 043234 galaxy, its gravity causes tidal forces that can rip the star into shreds. In these events, some of the stellar debris is hurled out at high speeds, while the rest falls into the black hole. This causes a distinct X-ray flare that can last for years.

With three X-ray telescopes, a team of astronomers detected the last “cry” from a star that passed too close to the black hole and was being devoured.

“The black hole tears the star apart and starts swallowing material really quickly, but that’s not the end of the story,” said Jelle Kaastra, one of the study’s authors from the Institute for Space Research in the Netherlands. “The black hole can’t keep up that pace so it expels some of the material outwards.” 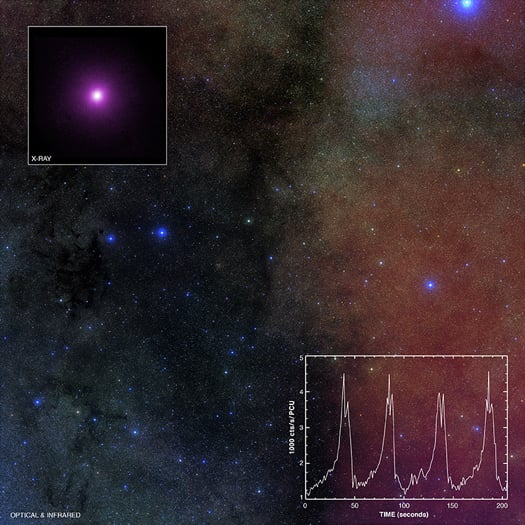 GRS 1915+105which involves two stars, is the mother of all Teacups rides. The system is based in the Aquila constellation about 35,000 light-years from Earth, and contains a black hole about 14 times the sun’s mass.

Like in other black holes, star gases swirl toward the center. As they spiral, they form a reservoir of material around the hole called an accretion disk.

What makes GRS 1915+105 unusual is that it’s spinning about 1,000 times per second. That’s the maximum possible rate. Scientists measure the spin to determine how strongly the black hole drags spacetime right outside the hole’s event horizonthe point beyond which nothing can escape.

The black hole in B023-G078 is one of the only confirmed intermediate-mass black holes.
Credit: Iván Éder, HST ACS / HRC

This black hole is special for being in the middle, so the only fitting rank for it is right here at the middle of our list.

The black hole is within B023-G078a giant star cluster in the galaxy next door to us, Andromeda.

The new black hole is what’s known as a “stripped nucleus,” composed of remnants of small galaxies that have fallen into bigger ones, with their outer stars stripped away by gravitational forces. What’s left is a seriously tiny and dense nucleus of what was at one time a small galaxy orbiting a bigger galaxy, which also has a black hole at its center.

Current theories predict that supermassive black holes like this one begin their lives in the dust-shrouded cores of starburst galaxies before evolving into quasars.

“GNz7q provides a direct connection between these two rare populations and provides a new avenue toward understanding the rapid growth of supermassive black holes in the early days of the universe,” said Seiji Fujimoto, an astronomer at the Niels Bohr Institute of the University of Copenhagen and lead author of the study, in a statement. “Our discovery provides an example of precursors to the supermassive black holes we observe at later epochs.”

The mixture of radiation coming from the object can’t be attributed to star formation alone, according to NASA. The source of ultraviolet and infrared light is consistent with the materials expected to fall onto a black hole. 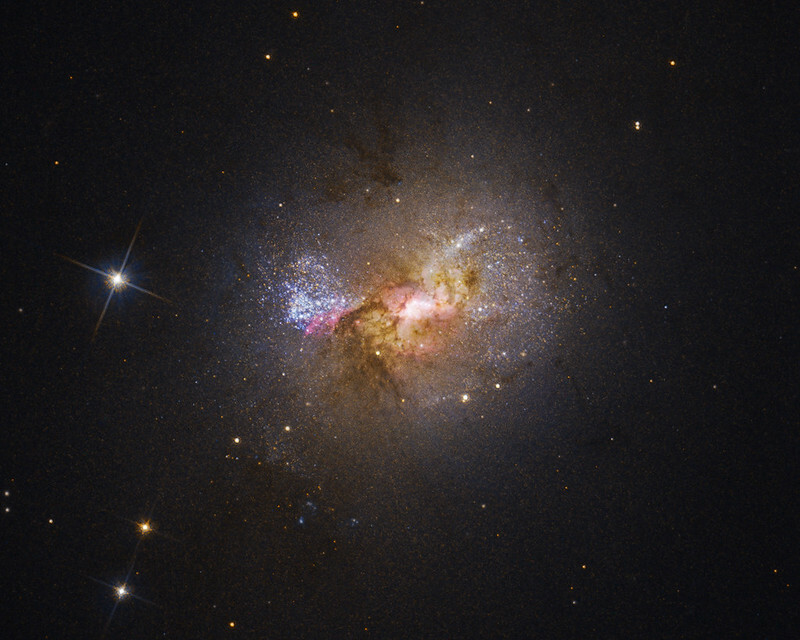 Rather than ripping stars to shreds and swallowing up every morsel, this black hole in Henize 2-10 is fostering star formation in a dwarf galaxy.
Credit: NASA, ESA, Z. Schutte (XGI), A. Reines (XGI), A. Pagan (STScI)

Black holes are poorly understood cosmic bodies, generally thought of as vacuums sucking light out of the universe.

A black hole in Henize 2-10 actually takes that negative stereotype and turns it on its head. Rather than ripping stars to shreds and swallowing up every morsel, this black hole is believed to be fostering star formation in a dwarf galaxy. It’s like reincarnation.

Hubble Space Telescope imaging and spectroscopy show a gas stream stretching from the black hole to a bright star birth region “like an umbilical cord,” according to NASA, triggering the formation of clusters of stars.

The photo above shows the galaxy glittering with young stars. The bright center, wreathed in pink clouds and dark dust, indicates the region of the black hole. Sagittarius A* is the supermassive black hole found in the center of the Milky Way galaxy.
Credit: Event Horizon Telescope

Meet your neighborhood supermassive black hole, Sagittarius A*. This is the black hole at the heart of the Milky Way, 4 million times more massive than the sun.

But it’s not as close as you might think. Scientists have estimated its distance at 26,000 light-years from Earth.

Sagittarius A*, pronounced “Sagittarius A-star” or Sgr A* for short, recently had a big day. On May 12, 2022, the Event Horizon Telescope group released an actual photo of the black hole, the second such image ever achieved. Scientists say the breakthrough picture is a groundbreaking achievement because the Milky Way’s black hole is so common. Studying it will allow researchers to learn more about typical supermassive black holes throughout the universe. 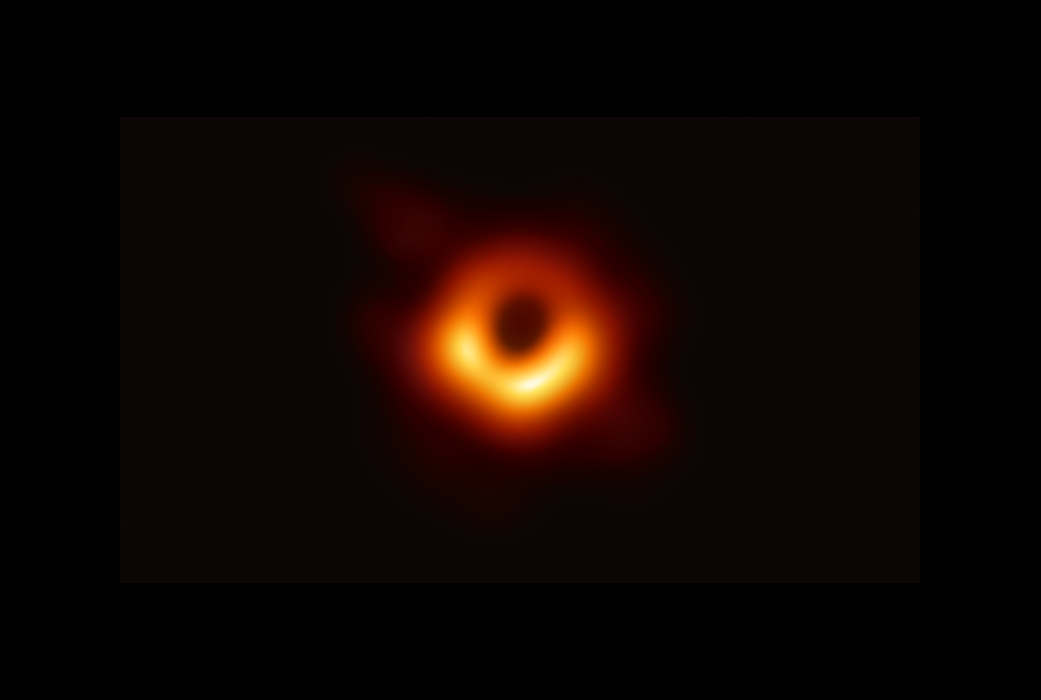 M87’s black hole is the first ever photographed. What you’re seeing is its shadow cast on the bright accretion disk circling it.
Credit: Event Horizon Telescope collaboration et al.

More than 55 million light-years from Earth lies a special supermassive black hole. This hole, located at the center of the elliptical galaxy Messier-87has a mass 6.5 billion times that of the sun.

But that’s not what makes it exceptional. What makes M87* deserving of the No. 1 slot? Simple: It was the first ever photographed, providing visual proof of Albert Einstein’s theory of General Relativity in action.

Black holes are by definition invisible — no light can travel fast enough to escape them. Astronomers detect them from the way their gravity interacts with other objects, and artists create dramatic illustrations and videos to depict them.

In this case, scientists snapped M87’s black hole in silhouette. They accomplished this feat with several ground-based radio telescopes working together as one telescope the size of Earth.

As far as black holes go, this one is pretty wild, launching a humongous jet of radiation as far out as the edge of its galaxy.